St Patrick's College has been the school who has dominated this event.

The following commentary has been provided by Lance Deveson, son of Harlod Deveson:

Harold Deveson was a old boy of Ballarat High School but never rowed during his time at BHS but after the school started rowing and old scholars purchased a coach’s motor boat, he gave the school it’s first motor for the boat.

When the Olympics were held in Ballarat in 1956, all the service clubs were assigned countries to look after. Ballarat Rotary, where he was a member for 42 years and a Paul Harris fellow, was assigned Belgium. As my father could speak french, he became the attaché to the Belgium team. Their manager, Stany Fonteyn , later to be a chief judge at 3 Olympics and FISA vice president, became a life long family friend of our family, spent many hours at our house during the Games and we at his house in Bruxelles.

When he retired from rowing, he sent me his entire rowing medals, including his 1932 European Sculling gold, as he only had 2 daughters who never rowed and “ he didn’t want his son in laws to throw them out”. ( I have them framed at home in my study. This meeting with Stany made sure that when I started secondary school at Ballarat College all I wanted to do was row, or due to my size Cox and be part of the Head of the Lake. My father and Stany conversed via letter for many years until Stany died in the late 80’s and we still regularly converse with his daughters.)

During the early 1960’s my father volunteered his time and his own motorboat to drive initially College coaches. When I started Coxing in 1964, he drove his boat for every coach in each crew I coxed and continued up until 1977, 7 years after I finished at College. I then used the boat for my own coaching at College.

My father was the first non old collegian on the Ballarat College Council. It was just a chance discussion with then headmaster, the late Ron Horner, over the prospects of the first crew for 1971, that the Headmaster stated that there should be a trophy for the school who wins the most races on Boat Race. In his eyes this was a true indication of a school’s rowing depth. My father offered to donate a trophy. 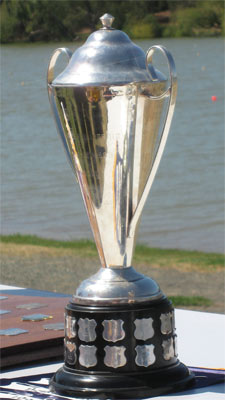 My father was very humbled by the naming since he had never rowed a stroke in his life! Dad presented the trophy from 1971 until 1997 when he became too frail to do the presentation but still attended the races.

Harold died on Good Friday, 2006 aged 94. He had never missed a Head of the Lake from 1960 until 2002. Although very frail in 2001, he was given the honour to present the Head of the Lake Dowling Challenge Cup to his grandson Tim Deveson who coxed the winning Head of the Lake crew at College and was Captain of Boats.

Ballarat Head of the Lake