The regatta was conducted on Saturday 27th April 1907.

The report of the race in the Western Mail on 6th May  described the very difficult conditions and the desperate finish for minor placings.

The weather conditions early on Saturday last were such as to cause grave doubts as to the advisability of deciding the event on this date. Fortunately, however the day brightened as noon approached, promising a passably fine afternoon, which was justified later. If seemed that the Zephyr offered the best opportunity of witnessing the tussle, and accordingly I made my way on board at the appointed hour, whither had gathered a good number of friends of the contestants, shortly after 3 p.m. we steamed down river to the starting point, which was almost in a line with the two-mile post, and was indicated by two flags placed ashore, giving the required line.

A large number of spectators had gathered on the terraces of King's Park and other vantage points in the vicinity. The crews for the most part were brought down to the scene of action in various craft, their "fours" being towed down, thus saving the energies that were presently to be called into full play. At the starting point the crews took their seats, received last words of encouragement and advice from coaches and friends, and paddled down to await the orders of the starter.

The wind, which on our setting out had been blowing strongly from the south-west, had moderated somewhat, and at the time of the race the water was not sufficiently rough to seriously hamper the oarsmen. The Zephyr was some considerable distance behind the crews when Mr. Horsburgh sent them away, and this distance, which was never substantially lessened throughout the race, rendered relative positions of crews, etc., matters for conjecture only. Guildford at the start had the station nearest King's Park, next came High School, then Christian Brothers' College, with Scotch College on the outside.

An even start seemed to have been obtained, and very early in the race Scotch College was seen to be taking the lead, next coming Christian Brothers' College, and then Guildford Grammar School and High School apparently on equal terms. As the race proceeded, the maroons appreciably increased their advantage, but their cox steered wide in the first section of the course, and then for the first time picking up his objective, kept it to the finish, not without having lost, a length or so in the deviation. The Scotch College crew had their boat on an even keel, were rowing good form, and their stroke set a certain uniformity of time of stroke.

Not so the other crews. Christian Brothers' College, in their endeavours to secure an advantage at the start, set a pace they were unable to keep, and as the vigour of their stroke died down they fell abreast of High School, Guildford occupying fourth position, but showing, nevertheless, in the comparative balance of their boat, greater possibilities for a finishing spurt. Scotch College continued to increase their lead, rowing from the Brewery to the finish in practically uniform 36.  It was very difficult to gauge the stroke of the three remaining crews; at one time a desperate effort on the part of the oarsmen resulted in a 44, to be succeeded by a reaction, recorded by a 33.

After the Brewery had been passed it was evident to eye-witnesses that Scotch College were assured of first place, and interest centred in the great struggle that was in progress tor second honours.

At two-thirds distance the Guildford stroke determined to make a bid for second place, and accordingly quickened. High School and Christian Brothers' College, however, were quick to respond, and from our point of view these three crews appeared to continue at evens for some distance further. High School, though holding their own, betrayed signs of tiring, and in concert with Christian Brothers' College, were rolling badly.

Guildford, too, were rolling and splashing, though not so badly as their opponents, and in this last circumstance lay their best chance. When 300 yards from the finish, Scotch College, with a still increasing lead, had placed the issue, so far as they were concerned, beyond all reasonable doubt, and a little later passed the judge about six lengths ahead of the second boat, covering the distance in 6min. 35sec.

Meanwhile a desperate struggle for second place was going forward. Guildford and High School were steering a fairly straight course, and the latter crew, apparently possessed of other reserve energy than they had previously given indication of, pluckily maintained their position.

Christian Brothers' College, on the other hand, steered very erratically, and close to the winning post it seemed that they must foul with High School. Fortunately the College cox pulled the right string in time, thus averting disaster. In the critical few moments that followed Guildford managed to secure a slight lead on High School, and passed the judge one jot to the good, High School, coming next, about nine inches in advance of Christian Brothers' College.

It was an intensely exciting finish, and the pity is that it was not for first place.

The maroons in the race rowed better form than they had shown in training, bow and 3 swooping into their body swing when the occasion demanded it. The Scotchmen rowed finely, and were every whit as good as their victorious combination of last year. High School and Christian Brothers' College, and to a lesser extent Guildford, after half distance, seemed to throw discretion to the winds, and forgot form in their endeavours to secure the much coveted lead; there was an almost entire absence of leg work and uniformity in time.  A notable exception No. 3 in the High School boat, who was rowing good form under most trying conditions.

The finishing point was marked by a pontoon moored opposite Mill Point, and there stood the judge (his Lordship the Bishop of Perth), Chief Justice Parker, and other officials. Hither adjourned at the conclusion of the race the winning crew, referee, form judge, and numerous supporters, to witness the presentation of the prizes, which pleasing ceremony devolved upon the Chief Justice, who accordingly bestowed the Headmasters Cup for the winning crew to the stroke of the Scotch College boat, accompanying the presentation with a few words of eulogy.

At the instance of the form judge (Mr. P. Ryan), the Chief Justice presented the form prize (the gift of D.G. Gawler, Esq ) to F. O. Mitchell, who rowed No. 2 in the Scotch College boat. Resounding cheers were given on the occasion of each presentation. Mitchell has only been rowing for a year, and his success must be regarded as very creditable indeed, and auguring well for his future as an oarsman. The form shown by Foss (H.S. No. 3). has shown during the race, been very favourably commented upon by rowing men. 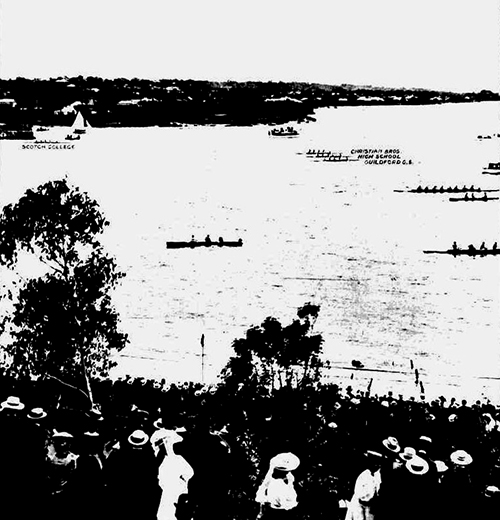 The exciting finish can be seen from this image