The Challenge Cup again was competed for on Saturday 27th June 1903 on a new course. The race was seven furlongs in length (1400M) from a point beyond the Swan Brewery to the Narrows, but neither the starting nor the finishing lines were at right angles to the course. It was reported that one very pleasing feature of Saturday's race was the fact that the four crews started together. The race was thereby considerably more interesting than in past years, when the contest was decided in heats.

"Stream" of the Western Times reported on the race as follows.

Those who braved the elements on Saturday afternoon and went down Mount's Bay Road to the Narrows to see the annual four-oared secondary schools' challenge race rowed were amply rewarded by witnessing a fine race and as close a finish as the keenest sculling man could have wished to see. Unfortunately, just about the time the race was to have been decided, heavy rain began to fall, and continued to fall for forty minutes. The High School and Christian Brothers' crews were early at the starting point, but the Guildford Grammar School and Scotch College crews and their boats were not at the post until the rain had nearly cleared on.

The slope of Mount Eliza, facing the finishing flag, at the Narrows, easily accommodated the couple of thousand spectators, who were able to gain an uninterrupted view of the whole course. When the tropical downpour was in progress the only available shelter was the tea-house, and its friendly roof covered many hundreds of thankful spectators. Even when the race was in progress, and the rain slightly recommenced, large numbers turned it into an impromptu grandstand.

The rain made the water like a sheet of glass when the boats got into position, about forty-five minutes late. The four crews got off well together, all rowing 38 to the minute, but the High School boys began to lag behind from the outset. They were never in it at all, and eventually finished a bad last. Mr. C. R. Penny, who trained them assiduously, generously takes all the blame for their failure. They had rowed brilliantly against two Swan River Club fours on the previous Saturday, and he is afraid that he overwound them. Certainly, the position nearest the bank was not the choice of place.

The contest speedily resolved itself into a thorough go between the other three crews, Christian Brothers lying second from the bank, took up the van when nearing the brewery. Guildford hung on to them, half a length away, while on the outside Scotch College rowed a length behind Guildford.

At the brewery Scotch had gained a little, but the Christian Brothers still led. Passing the brewery the three crews were abreast, and the struggle commenced in earnest opposite the Old Men's Depot. Here, owing to an accident to stroke's slide, Guildford were in difficulties, and they allowed their flanking boats to leave them gradually behind. Scotch led slightly when the final spurts were made.

The Brothers answered splendidly to the call for pace; but Scotch, rowing with every coolness, held their own ably. The dips were alternate as the two boats, far apart, neared the finish, each dip sending one or the other ahead. The cox of the Brothers' boat, when only a few lengths from home, pulled his head out of the straight course, and Scotch were fortunate enough to get in the dip that forged their boat across the line of the flags, eighteen inches ahead of their doughty opponents. Had the course been a few yards longer, the Brothers' dip would have gained them the victory.

The Guildford boys finished a length and a quarter behind.

His Excellency the Governor witnessed the race from Mr. A. E. Morgan's launch, and afterwards presented the cup to the winning crew from the deck of the launch.

The Commissioner of Police kindly placed his launch, the Cygnet, at their disposal. Usually an invitation is given to the reporters to witness such a race from the official launch, but on this occasion this courtesy was not extended.

Clearly "Stream" was not happy about reporting from the bank. Also his view of the new course was clearly that it had favoured lanes. 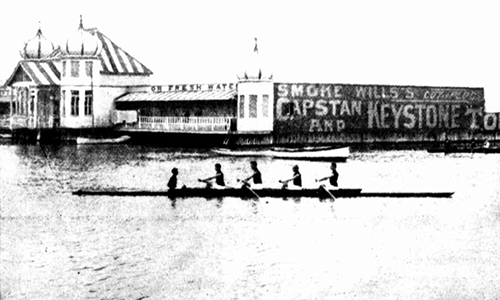 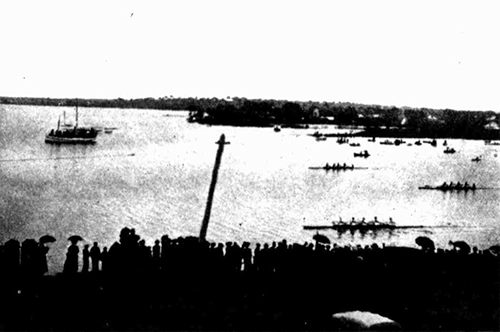 The finish of this tight race