6 crews raced over 1⅛ mile on the Derwent River for the 1953 Head of the River title:

An estimated 3,000 people were along the shores of the Derwent, according to The Mercury. The conditions were challenging due to a strong tail breeze. St. Virgil’s College managed to win the premier race two lengths ahead of both Launceston Church Grammar and Scotch who dead-heated. This was St. Virgil’s 3rd ever title, with the other two coming in 1935 and 1951.

The same 6 schools in the first’s category were represented in the seconds category:

The Mercury reported that St. Virgil’s also won the seconds race over the ½ mile distance by three-quarters of a length.

The Mercury wrote that Launceston Church Grammar won the thirds race by ¾'s-of-a-length.

Four crews also raced the fourths category; the first time there was a fourths race at the Head of the River:

Friends won by a length over Launceston Grammar, as written by The Mercury.

The Mercury reported the following of St. Virgil’s convincing display:

“Friends' gained the best start from St. Virgil's, Scotch, and Hutchins. St. Virgil's rated 38 and exploited a powerful leg drive and smart catch to take the lead from Scotch after about 100 yards. Scotch was rowing with, good precision and not throwing up much water, but lacked length and drive through the water. At the half-way mark, St. Virgil's was more than a length clear of Scotch and was moving away with every stroke. Hutchins and St. Patrick's had dropped well back. Rating a steady 30, St. Virgil's crossed the finishing line two lengths in front of Grammar and Scotch.” 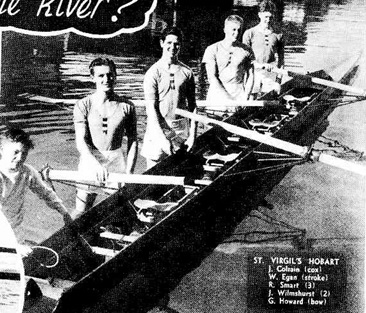 The Mercury wrote of the seconds race:

“Good watermanship won St. Virgil's the race. Half-way down the course St. Virgil's led Hutchins narrowly, but Hutchins struck trouble in the choppy conditions near the finish and St. Virgil's drew away to a three quarter-length win.”

“The contest was even until 50 yards from the finish, when St. Virgil's struck trouble in the backwash from the 'bridge. Grammar lifted its rating to 36, and forged ahead to win by three-quarters of a length.”

The Mercury wrote that The Friends' School won by a length over Launceston Church Grammar.