Schools from the North and South raced at the same Head of the River regatta for the first time since 1939, due to the war ending. This meant that the winner of the 1946 Head of the River earned the coveted Golden Fleece Cup, which has not been awarded whilst the regatta has been split.

6 crews contested for the title race on the Tamar River, over one-mile, in the re-amalgamated Head of the River of 1946:

The Mercury wrote that the race was met with a strong southerly wind and a tide which was ebbing. Launceston Church Grammar took the lead from halfway to win the Golden Fleece Cup by 2½ lengths over Hutchins School. This made it their 12th win since the inauguration of the Tasmanian Head of the River in 1916. Hutchins were in second place for the 7th time in the title race. Scotch did well to enter the race as they had a replacement come into the crew the morning of the race.

5 crews started for the juniors who raced over ½ mile:

The Mercury commented that Launceston Church Grammar won the junior race by 2 lengths to make it their eighth successive win in this category.

The Mercury provided the following report of the title race:

“Hutchins made the most of an even start but Grammar and Friends quickly were chasing the leaders. Stroking 40 to a minute for the first 100 yards, Hutchins maintained a slight lead until halfway along Kings Wharf from Friends, with Grammar making up the leeway from third position. While Friends was hitting 36, Hutchins and Grammar dropped to 28, but approaching the junction to the North Esk, Grammar, which had taken the lead increased its stroking to 34 with Hutchins stroking 32 and Friends’ 28. Friends' commenced to tire and it became a race between Hutchins and Grammar. Grammar with splendid timing, and good length increased its lead. St Virgil’s was never challenged throughout the race for fourth place, but Scotch College and St Patrick’s College had a keen struggle for fifth. Grammar rowing easily, quickened to 38 near the finish, and the corresponding sprint by Hutchins did not lessen the gap. Grammar crossed the line 2½ lengths in front of Hutchins, with Friends’ three lengths back in third place. There was a big gap of about 10 lengths to St Virgil’s and then another gap of six lengths to St Patrick’s, which defeated Scotch for fifth place by a length. The time of 6m 15s for the race was good, as the crews punched into a strong wind.”

The Mercury reported the following about the Second Four race:

“The junior race followed much the same pattern as the senior with Hutchins and Friends' jumped away at the start, and Grammar began to make up the leeway from third place. While Friends' was sinking 36. Grammar and Hutchins were lifting their boats along at a 32 rate. St Patrick’s College and Scotch College were battling out the fourth place. The fast rate of stroking set by Friends’ was beginning to tell on the crew and at the river junction, Grammar overhauled Hutchins, and then passed Friends'. Grammar gradually increased its lead to cross the line with two lengths to spare, for the school's eighth successive win in junior Head-of-the-River races. Hutchins challenged Friends' strongly for second place, but in vain. Then followed Scotch and St Patrick's Colleges. The time for the half-mile was 3m 37s.” 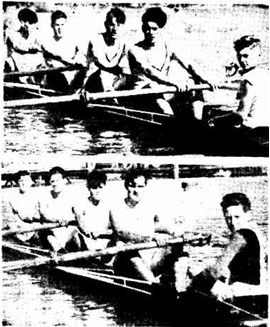