The Mercury reported that there was keen public interest for the regatta. Hutchins School were able to regain the Golden Fleece Cup from Clemes College. Hutchins won the race by a convincing margin of 4 lengths over Clemes. 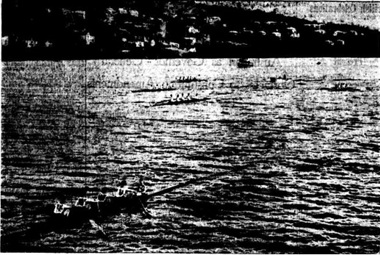 The following is an account by The Mercury of the 1930 race:

“Hutchins had the No. 1 position on the eastern shore, then coming Friends', Clemes, Scotch, and Grammar, nearest to the western bank. The crews were ready 10-minutes before time, and there were still two minutes to go when the gun was fired. Hutchins and Scotch started off very fast at 44, Friends' and Grammar were timed at 40, and Clemes' stroke set 36. In the first 300 yards Hutchins, with a beautiful shoulder lift and leg drive, forged ahead from Clemes, who were slightly in advance of Grammar, Friends', and Scotch. When a quarter of a mile had been covered Hutchins, still showing splendid blade work, were out a length from Grammar, who had run into second place. Clemes, who were a llttle ragged at this stage, were half a length behind Grammar, and Scotch and Friends, racing level, were a similar distance to the rear of Clemes. At the half distance Clemes was improving rapidly, and lifting their boat well through the water they passed Grammar. A length and a half ahead Hutchins looked unbeatable. The piling, which starts the final stretch, found Hutchins a good three lengths ahead of Clemes, then coming Grammar, Friends', and Scotch. With a burst Hutchins came away in the last stretch, and passed the line four lengths ahead of Clemes. Grammar, who were third, were two lengths behind Clemes. Friends' were fourth, about a length to the rear of Grammar, with Scotch last, half a length behind. No time taken.”