The 1936 Head of the River was raced on the one-mile course on the Tamar River. For the first time since 1919, seven crews raced. This was the first time St. Patrick’s College were vying for the Golden Fleece Cup since 1928:

The weather conditions were ideal, with The Mercury describing that there were spectators spread from the cattle jetty to the Northern end of Royal Park. Launceston Church Grammar took the early lead, before being hauled back by both Clemes College and Hutchins School around the half-mile. However, Launceston Grammar had one more burst which overtook Hutchins, then, right on the line, inched past Clemes. Launceston Grammar won the Golden Fleece Cup, for the first time in 11 years, by 3 feet over Clemes.

The junior race was raced over a half-mile course. Four crews entered the race:

The Mercury described the tight racing below:

“The seven crews got away to a splendid start, and St. Virgil's and Clemes, on the western shore were the first to show out. In the first dozen strokes these two crews opened up a lead of about a canvas from Hutchins, Grammar, Friends', Scotch, and St Patrick's College. St Patrick's, however, soon tailed off. Approaching the northern end of King's Wharf Grammar, which had the position nearest the eastern shore, went to the front, and led Clemes and Hutchins by half a length, with Friends' and Scotch on even terms close handy. St. Virgil's weakened considerably at this stage. Grammar was rowing a fairly fast stroke, and the men were sitting their boat well, putting straight backs into the stiff breeze. Scotch was rowing strongly, but not evenly, and Clemes, with relaxed backs, appeared to be rowing a style something like the Fairbairn. St. Virgil's was getting very little run on its boat, and appeared rather sluggish. As the race progressed past King's Wharf Clemes and Hutchins set out after Grammar, and quickly overhauled it. In a desperate battle for the lead Clemes and Hutchins, locked to- gether, left Grammar nearly a length behind at the junction of the North and South Esk rivers. The two leading crews were very close' together at this stage, and appeared to touch each other. With a quarter of a mile to go, Grammar, which had been rowing confidently and easily throughout, commenced its devastating burst, and the cheering was deafening as the three leading crews flashed past two moored barges, which were crowded with supporters inch by inch Grammar crept up on Hutchins, which was weakening appreciably under the strain, and, passing this crew, set off after Clemes. Grammar wore down Clemes almost on the finishing line to win by 3ft., with Hutchins nearly a length further back.” 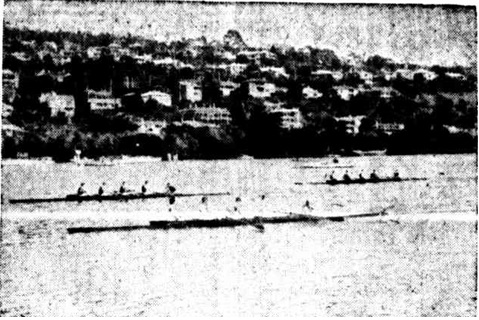 The Mercury filed the following report for the Second Four race of 1936: