The 1945 Northern Head of the River was held on the Tamar, which was raced over 1⅛ mile. 3 local crews raced:

The Examiner characterised the conditions as a slight headwind on the course. Launceston Church Grammar won for the 4th year-in-a-row.

The four local crews raced over one-mile on the Derwent River in 1945:

The Mercury wrote that the conditions were perfect for racing due to the tailwind for the crews. The Friends’ School won by 1¼ lengths from St. Virgil’s making it their first win at the Southern Regatta since 1941.

The junior category, raced over ½ mile involved the same schools but with Launceston Grammar having a 2nd crew. The 4 crews were:

The Examiner wrote that, like the First Four, Launceston Church Grammar 1 won the junior race for a 4th year-in-a-row.

The 1945 Juniors race reverted back to just one junior race as it was in 1943, because only two schools had a third crew available to race. 6 crews entered the junior race:

The Mercury accounted that Hutchins once again won the Second Four.

The Examiner described Launceston Church Grammar's win as dominant, given they won by 8 lengths in a time of 6 min 28 sec. It was their 4th win in-a-row.

Winners of the 1945 First Four at the Northern Head of the River - Launceston Church Grammar
(Source: The Examiner, 27 March 1945)

The Mercury provided the following report of The Friends' School's victory:

“Friends' was first to show out from Hutchins and St. Virgil's. Clemes dropped back early. Maintaining an even rate of striking, Friends' continued to, hold its lead, with Hutchins close-up at the half-distance. A quarter of a mile from the finish Friends' had a lead of a length from Hutchins, with St. Virgil's moving up, and Clemes in the rear. Friends' finished with good dash to win by 1¼ lengths from St. Virgil's, which came with a spirited dash towards the finish, and was half a length in front of Hutchins. Clemes was several lengths farther back.” 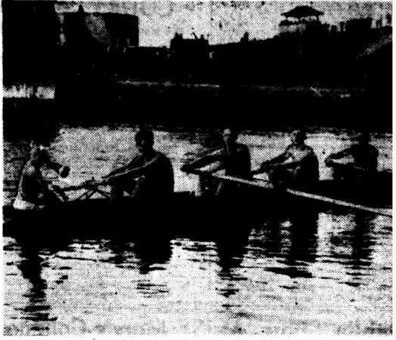 The Examiner wrote that the 4th win-a-row for Launceston Church Grammar was done in a dominant display of  5 lengths.

The Mercury described the race as thrilling as Hutchins 1 won by just 2 feet over The Friends’ School.

Northern Head of the River:

Southern Head of the River:

In the Second Four, it was Launceston Church Grammar School against Hutchins School.

The Mercury provided this account of the North vs. South race of 1945:

“In the senior race, over nine furlongs, Grammar' and Friends' crews got away to a good start. Stroking about 38 to Friends' shorter stroke. Grammar immediately gained a half-length advantage and was never headed. After a quarter of a mile the margin was unchanged, with Friends' quickening its stroke in an effort to draw level. At half-way, the choppy conditions had not affected Grammar's steady stroke, but Friends’ boat was rolling badly. With a quarter of a mile to go Friends' was sprinting in an effort, to overtake Grammar, but without success. With 200 yards to go Grammar put more strength into its strokes, and still displaying beautiful timing and nice body swing, began to draw away. Friends' fought on gamely, but the crew's timing was not good and its shorter stroke, made more with the arms than the legs, was not suited to the heavy going. Friends' again sprinted near the finish, hut Grammar, with timing undisturbed, crossed the line to win by a length and three quarters. The time, 8m. 13s., reflected the difficult conditions. The crews rowed into a stiff southerly which made the river choppy…Although defeated, Friends' rowed a good race and in faster conditions would have pressed Grammar very close.”

“In the half-mile junior race, Grammar had an easy' win. Taking the lead from the gun, the local crew had a four-length lead and was going away when Hutchins caught a crab. From then onwards Grammar, employing a long, steady stroke, maintained a five-length lead for the rest of the race. Hutchins appeared far from comfortable in the conditions. The crew was not well balanced and steered an erratic course. The time of the race, 3m. 52s., compared very favourably with that of the senior crew." 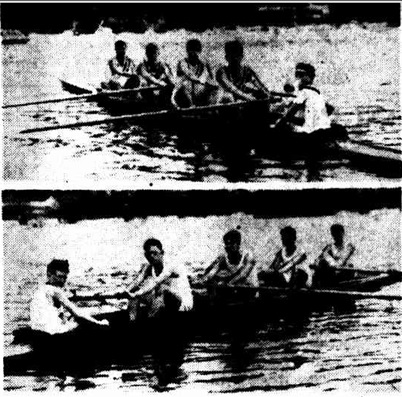