The Northern Regatta was raced over one-mile on the Tamar. The 3 crews involved were:

Four crews started for the Southern Regatta of 1942, raced over the Derwent over 1¼ mile:

The Mercury described the race as an exciting as a result of the lead changing several times throughout the race. Clemes, St. Virgil’s and Hutchins all led the race at some point, but it would be Hutchins who would win by just half a canvas over St. Virgil’s. It was Hutchins first win of the major race since 1937.

The same three schools above entered crews in the Second Four, in which they raced over ½ mile:

There were eight starters for the junior race. They were:

According to The Mercury, St. Virgil’s put in a “remarkable sprint” to win by half-a-length over the half-mile course.

The Advocate reported that Grammar led from start-to-finish and won by 2½ lengths. 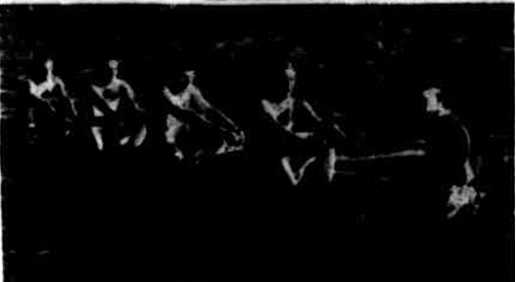 Winners of the 1942 First Four at the Northern Head of the River - Launceston Church Grammar
(Source: The Examiner, 18 April 1942)

The Mercury provided the following report of the enthralling seniors race:

“At the starting gun Clemes went to the front, closely challenged by the other crews, and at the quarter-mile distance little separated the four contestants. St. Virgil's then secured a slight lead from the other three crews, rowing level with each other. At the half-mile Hutchins caught St. Virgil's, with Friends losing ground and Clemes improving its position. Over the final quarter of a mile Hutchins and St. Virgil's fought out the issue, each in turn gaining a slight lead. With 100 yards to go, Hutchins had a canvas lead over St. Virgil's, and Friends were coming with a strong finishing challenge. Amid excitement Hutchins finished well half a canvas ahead of St. Virgil's, with Clemes half a canvas away and Friends half a length behind in fourth place.”

The Advocate reported that Launceston Church Grammar won by an enormous six lengths.

The Mercury wrote the following:

“The race for Junior crews was equally spectacular. The eight participating crews finished in a bunch. While attention was focussed mainly on Hutchins II and Friends' II crews, St. Virgil's II, close in shore, put in a remarkable sprint over the last 300 yards of the half-mile course and flashed over the line half a length ahead of the other two crews, who were separated only by half a canvas, second place going to Hutchins.”

Northern Head of the River:

Southern Head of the River: