The 1934 Head of the River returned to the Tamar River on the Home Reach course of 1⅛ mile.  The same 6 crews raced as the previous year:

The Mercury emphasised that the conditions on race day were one of, if not, the worst ever experienced since the inception of the Tasmanian Head of the River in 1916. The race was characterised by a strong tide, and, a strong southerly breeze working against the crews. Accordingly, Launceston Church Grammar and St. Virgil’s boats were floundered, and Scotch’s boat also filled with water. Nonetheless, Hutchins were successful in winning a gruelling race by two lengths over Clemes College.  It was Hutchins School’s first win in 4 years.

4 crews started in the seconds race over the half-mile course. They were:

The junior race ended up being a two-horse race, with Clemes and Launceston Grammar superior over Hutchins and Friends’. Clemes took out the race by a length, and all crews finished the race as they were rowing in practise fours.

The Mercury provided the following account of the challenging conditions on the Tamar:

“Conditions have seldom been worse for the Head of the River race on the Tamar, though so many boats may not have foundered had the precaution been taken of fitting the boats with splash-boards. Hutchins was the only boat fitted in this way. The crews were late in getting away as the starter was manoeuvring for a favourable position from which to despatch the boats. While this delay occurred, the boats were shipping water on the starting line… All crews got away to a very even start, but before 30 yards had been covered Hutchins, Clemes and' St. Virgil's commenced to show out at the front of the field' of six. Friends' and Scotch, who were close handy, were in danger of fouling, but Scotch veered' further westward towards the Trevallyn shore. St. Virgil's and Hutchins were also rowing rather closely together. Grammar and Scotch were the first to show the signs of the water they were carrying, and were dropping back, Grammar shortly afterwards stopping rowing. This crew foundered just before reaching the Texaco Wharf. Approaching King’s Wharf, Scotch eased up. The four Southern crews were then making the race, with Clemes leading Hutchins slightly, closely attended by Friends' and St. Virgil's, who, however, filled and sank at this stage. At the junction with the North Esk River, where the water was calmer, Clemes had a slight advantage still, but Hutchins then put in an early burst and drew level. Clemes at once responded with a challenge at the commencement of the close piling, but the faster stroke caused this crew to row short, and the boat did not have such a good run between strokes. Hutchins then commenced to row Clemes down, and with powerful strokes and a good clearance. drew away to win by two lengths from Clemes, with Friends lying in third position four lengths further back. The Hutchins stroke realised that a long, steady stroke, with all the power applied by the shoulders and legs, was the only method to adopt under such conditions.” 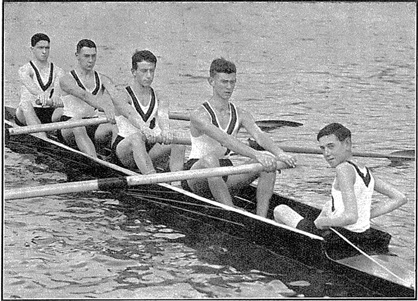 The Mercury’s report of the Second Four race of 1934:

“Clemes and Grammar fought out the junior title almost from the start, the form of Hutchins and Friends' being much inferior to that of the two leading crews. Clemes, rowing with precision and power, had an advantage of a length over Grammar at the commencement of the close piling, but Gram- mar hung on doggedly. Clemes whose coxwain steered a splendid course, put in a well-timed sprint, and drew away to win by a length from Grammar, who had been unable to make any impression on the southern combination. Hutchins finished three lengths ahead of Friends', though both these crews were a long way in the rear. The junior oarsmen, who rowed in practise fours' over half a mile, did not have so much trouble with the conditions, and shipped very little water.”