The 1926 regatta returned to the Tamar River and was rowed on a one-mile course, starting at the “red pile at Ti-Tree Bend to the southern end of King’s Wharf”. Five crews entered the race:

The conditions were ideal for racing, with a slight north-easterly breeze favouring the crews. Large crowds were gathered on King’s Wharf as well as people on vessels that were moored past the finish line. Despite defending champions Launceston Church Grammar being considered favourites, Hutchins won the Golden Fleece Cup as they did two years earlier on the Tamar. Unfortunately, Scotch suffered a “broken paddle” from their three seat which compromised their race. 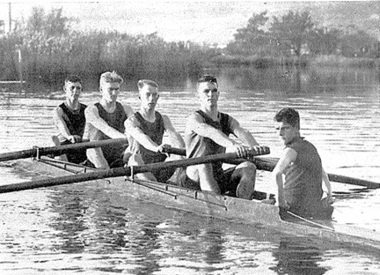 Below is a description of the race from the Daily Telegraph:

“The course was from the red pile at Ti-Tree Bend to Town Point, a straight mile. After a false start and a fair amount of manoeuvring, the boats got away satisfactorily. The Clemes crew had a slight advantage at the beginning, with Hutchins and Friends' High a short way behind. Clemes and Grammar appeared to be getting away, but the Hutchins crew, rowing long, powerful strokes, drew away at the end of 200 yards from the start and, although strongly challenged by Clemes and Friends' High, established a lead which they maintained to the finish. The Grammar School crew were favoured by rowing experts, but disappointed their admirers when the stroke lengthened out too soon. Scotch, despite the accident which befell them by the breaking of No. 3 paddle, were' showing as good form as any, but the additional weight in the other boats told its tale. Nevertheless Scotch would have finished in a much better position if the mishap had not occurred. Friends' High and Clemes crew kept the best course throughout, Hutchins losing the direction a little towards the finish, but they rowed strongly throughout the whole course, which came as a surprise in view of three almost last-minute changes. Friends' High rowed well, but all the crews except Hutchins were becoming ragged at the finish. Hutchins won by a length and a quarter from Clemes, which had an advantage of a length and a half from Friends' High, which were two lengths further back and then a similar distance behind came Grammar, with Scotch last. No official time was taken but private watches made it 5mins 57secs, which under the conditions was fair.”