Due to WWII, the Head of the River in the period 1940-1945 split into two regattas; the Northern and Southern Head of the River.  This decision was made by the Tasmanian Public Schools Association, meaning that the Golden Fleece Cup was not awarded during these years.

The Northern Regatta, held on the Tamar, involved three local crews who raced over one-mile:

The Examiner noted that the regatta was marked by ideal racing conditions. Scotch College were successful in their maiden win in the Head of the River format, doing so in emphatic style by 3 lengths.

The Southern Regatta of 1940 was held on the Derwent over a mile and included 3 crews:

Despite the split regatta between schools of North and South Tasmania, The Mercury wrote that a sizeable crowd watched the race in near-perfect conditions. Clemes were the winners of this year’s regatta, winning by just 3 feet over Friends’.

The same three crews from the First Four (North) raced in the seconds category:

Friends’ won the race by 4 lengths.

The Examiner provided this report of the Northern regatta of 1940:

“Scotch College, Grammar and St. Patrick's College started, but [St. Patrick’s] were never a danger to the two other crews. Scotch led all the way, but towards the finish Grammar rowed strongly to draw withing striking distance. Scotch came away with a spurt at the finish, to win by about three lengths.” 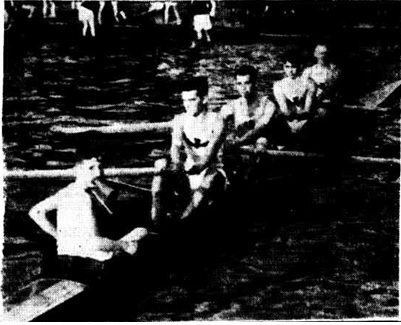 The Mercury’s account of the 1940 Southern Regatta is below:

“Clemes and Hutchins were smartest away at the start, but Friends' were slow to get moving and lost a length or so at the start. Clemes and Hutchins went to the front, and at the half-distance Clemes held a lead of half-a-length from Hutchins, with Friends' a length back. Clemes commenced to move out and increased its lead to a length over Hutchins, with Friends' steadily making up ground in third position. Nearing the finish Friends', rowing with a better length than the other crews, and clearing much water with a hard catch and leg drive, passed Hutchins and with every stroke gained on Clemes. In a gruelling finish Friends' and Clemes rowed almost abreast to the line, but Clemes managed to hold off the challenge and cross the line with only three feet to spare. Hutchins was one-and-a-half lengths farther back.”

“Scotch College had an early lead, and rowing in good style, drew away to win by four lengths. St. Patrick's were close up third.”

The Mercury wrote that due to a breakage, Hutchins School 1 were unable to complete the race. Friends’ were victors and won the race by 4 lengths.