Jim Saul retired after this race, married and returned to farming. Four years later in 1957, he had a trawler built and commenced prawn trawling. In 1978 he was appointed to the Fish Marketing Authority of NSW and served several terms as Chairman of that Authority, retiring in 1990. In 1988, he was a key player in the errection of the new fish market in Sydney which used a dutch auction system for selling the fish.This speeded up the selling process thus enabling buyers to return to their businesses early. It is still operating today. He was awarded an Order of Australia for his services to the fishing industry. 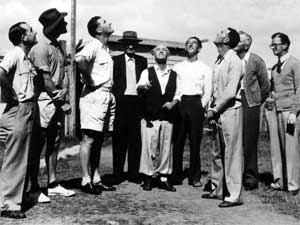 Tossing the coin for lanes one week before the race. 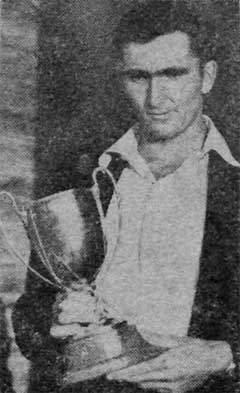 Fischer after his win

Fischer's financial backing came from the people of Maclean and surrounding districts and they shared in the prize money he won.

The first race was won by Fischer by two lengths. He was coached by Jack Casey and Snowy Burns. Paddon again immediately announced his retirement after the race and said that "Fischer was just too good for me". However Paddon returned two more times to challenge Fischer for the Championship.

Fischer learned his skills when he and his brother rowed a flat bottomed boat containing their sisters from Chatsworth Island where his parents farm was located to the Wombah school which they attended. This not only developed his skills but also his endurance and strength.

He raced successfully in butchers boat and Gladstone skiffs before progressing to a racing boat. He came from a good rowing family with his father a prominent rowing club member and his grandmother, Mary Anne Carolyn Fischer, a sister of the great Henry Searle. Jack Casey, his father's cousin, was his coach "and a darned good one, too" Fischer claimed.

Fischer hoped to raced Merv Wood, but as Wood was an amateur and he was a professional, it did not occur.