Little can be found of this challenge. The build up for this challenge began in 1880 when Laycock was the victor at the Hop Bitters Regatta in London shortly after Hanlan's victory over Trickett. The London Illustrated News reported on the Hops Bitter Regatta as follows and asks the question of when Laycock can challenge Hanlan:

THE WORLD'S REGATTA ON THE THAMES
November 27th 1880

The "Hop Bitters" regatta, promoted by an American company who gave the very handsome sum of £1000 in prizes, did not promise very well at first, as there was a very needless delay in the arrangement of all the preliminaries; indeed, nothing was definitely settled until about three weeks ago. Then, however, a thoroughly representative committee was formed, and the members of it worked so well that not a single hitch occurred from start to finish.

It was a series of sculling races, for prizes of £500, £300, £160, and £40, between professional oarsmen of all countries. So much care was exercised in the arrangement of the heats that the element of chance was quite eliminated; and when Laycock, Ross, Hosmer, and Warren Smith came together in the final heat on Saturday last, they afforded a complete example of the "survival of the fittest".

The withdrawal of Hanlan from the contest was a general matter of regret. Still, we can quite understand that the champion did not wish to run the least risk of defeat through any accident that may so easily occur when four men scull together in a comparatively narrow river; and if he only accepts Laycock's plucky challenge, the question of supremacy will be satisfactorily settled.

There is not much to note with respect to the trial heats, which took place on Thursday and Friday. England, as was generally felt must be the case, cut a very poor figure. Boyd is the only man we posses who is anything like a champion, and he did not compete. Elliott, who was not half fit, made a wretched show; and, though Hawdon and Nicholson sculled fairly well, and got into the second round, they have never ranked as first-class men.

The great surprise of Friday's racing was the easy defeat of Trickett by Laycock and Warren Smith. It is now quite evident that the ex-champion is utterly out of form; and this makes it more than ever desirable that Hanlan should waive his right to a longer notice, and consent to meet Laycock.

The final heat produced one of the grandest struggles in the history of boat-racing. Smith was out of it when they had gone a little more than a mile, but the other three kept close together right up to Chiswick Church. For the greater part of this distance Ross showed the way, and odds of 2 and 3 to 1 were betted on his winning. Shortly after passing the church, however, he was fairly worn down by Laycock, and a slight foul occurred as the indomitable Australian rowed up to him. This, however, did not affect the result in any way, and Ross's claim was very properly disallowed by Mr. Ireland, the umpire.

At Barnes-terrace Laycock had taken a decided lead, and going right away, won cleverly by nearly ten lengths, in 26 min 44 sec, while Ross was about half that distance in advance of Hosmer, who had shown wonderful pluck throughout.

The victory of the Australian was popular, and he met with a great reception as he journeyed back to Putney on the umpire's boat. 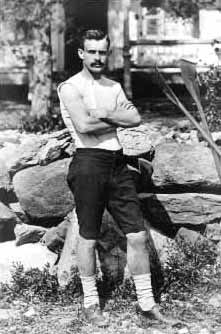 Also on the same page of the London Illustrated News under "National Sports" appeared this article:

An account of the "Hop Bitters" World's Regatta appears elsewhere; so we need only note that the gallant victory of Laycock has made everyone most anxious to see a match between him and Hanlan. The Australian is eager for the fray, and, as he has met the champion with regard to date, we hope that a meeting will be arranged, as the race would excite immense interest, public opinion being so much divided as to the respective merits of the pair.