Paddon won by seven lengths for the £300 a side contest. Newspaper reports at the time revealed some concern over the high stakes money required by the Australian Federation of Scullers to be able to call the title a World Championship. The newspapers reported: Both Cook and Paddon yesterday criticised the stand of the federation in demanding that each sculler lodge a sidewager of £300 before the contest would be recognised as a world championship. Cook said that the federation was basing its requirements on a past era of sculling. Instead of demanding such a high amount for a sidewager, the federation should consider abolishing it in order encourage young scullers to seek the title.

Gus Green represented the Australian Federation of Scullers at the championship and brought with him the Hagan Cup.

Cook wore his "lucky" singlet. The singlet was first worn by his coach Herb Turner when he won the Australian Amateur Championship in 1935 and was a pale blue NSW singlet with a waratah and the year 1935 printed on it. Unfortunately this was the first time Cook lost wearing the singlet. Robert Kemp was Cook's pace maker during training and won the Australian Championship on the same day from Jim Saul.

The race was rowed over 3 miles in five laps around buoys. Over 1000 people braved the unfavourable weather conditions to witness the event. It was reported that the course on the southern side of the river where Paddon raced had a distinct advantage.Due to recent heavy rain and strong winds, the course was gruelling on the upriver run with both wind and tide against the scullers. Paddon was probably 30 lengths in front before he eased up on the final run to finish seven lengths in front.

Cook, who suffering from a shoulder injury during the race, was also clearly not keen on racing around buoys. He said that he would like to race Paddon on a straight course.

Jim Saul hailed from the Macleay River and the race attracted a purse of £300 a side and a £150 trophy. Again the course involved turns at buoys. Some 6,000 spectators witnessed the championship. Saul's father and uncle were renown scullers with his uncle Tom was an unsuccessful challenger of Major Goodsell for the World Championship in 1926. Saul's pace maker was Charlie Edwards and his father coached him. Paddon used the young Evans Fischer as his pace maker. 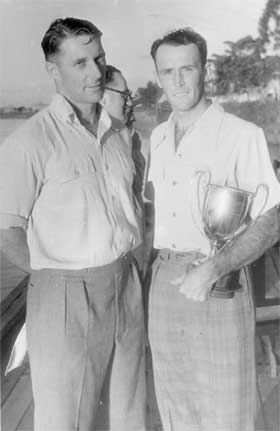 Paddon on the left and Saul on the right after the race. Saul is holding the perpetual trophy, the Hagon Cup.

The race was close with Saul winning in a desperate sprint to the line. The newspaper reports of the event stated:

Veteran followers of the sport with over than 50 years experience said they could not remember a closer finish. Saul put in a "miracle" finish when Paddon seemed certain to retain the title with 50 yards to go.  He was half a length in front with Saul apparently not making much impression. But then Saul mustered his "miracle" reserve of stamina to pip Paddon near the line. Saul's shell shot like a bullett over the last 20 yards and he was in front of Paddon with three mighty strokes.

...Saul's win was atributed to his 12 years advantage over Paddon and possibly because he was in better condition. [Paddon was nearing 40 years old at the time.]

...Paddon said later that he had panicked slightly in the last 50 yards and this may have cost him the race.

...Paddon said as he left the water: "I should imagine this would be the finish."...Paddon said that he felt as if he had had enough of professional sculling but he would not announce a definite decision on his retirement for a while.

...Race referee Mr J Casey said Saul did better at the turns, but Paddon gained an advantage at the last turn.Mr Casey added that the race was run cleanly and that it was the closest finish he had seen in 27 years of professinal sculling.

Saul claimed to be top condition for the race and was well prepared for a tight race. Saul's boat has been an exhibit at the Maritime Museum in Sydney.