Hanlan moved to Australia in 1884 to seek competition and to give exhibitions. He accepted a challenge from Elias Laycock and defeated him on the Nepean River. 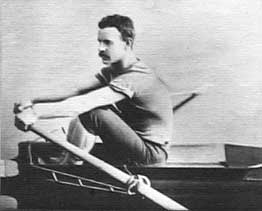 As soon as Hanlan arrived in Australia he was sought after by a blacksmith Bill Beach of Dapto.

Beach was born in England in 1854 and was brought to Australia by his parents at the age of two. The family settled at Dapto on Lake Illawarra where Beach learned to row.

Beach had been nurtured by the keen interest and huge betting involved. He had won a number of races including a win over Ned Trickett on the Parramatta course, giving him the right to challenge Hanlan. It is said that Hanlan put off Beach for some time until rumours circulated that he was frightened to compete against him. A race was arranged for 16th August 1894 before a vast crowd of an estimated 100,000 people, including an estimated 30,000 at the finishing line alone. A £1,000 side bet was also arranged between the scullers.

It was reported that Hanlan used every trick he knew to lure Beach into wasting his strength on early sprint duals. The Australian merely rowed his own solid race. By the two mile mark the Canadian was beginning to tire. A dual then emerged initiated by Beach and with half a mile to go, Beach made his successful move leaving Hanlan to sprint to catch up. Beach won by six lengths.

A monument for Beach was built at Cabarita Point which is on southern side of the Parramatta course, not far from the finish line. The inscription on the plaque reads:

The undefeated champion sculler of the world

The following notes on Bill Beach come from handwritten notes attributed to William J Goulding. (Some of the abbreviations have been replaced by their full words to provide for easier interpretation).

Beach sculled N McDonald for £50 aside on Parramatta which he won with ease. Geo. Solomon was his next opponent for £100 in wager boats and Beach won. Rowed before that at Woolloomooloo to Port Denison and back £25 presented by Deeble (Publican) won easily. Raced in Pyrmont Regatta – W Pearce beat him. He beat Reynolds for £200 won easily (after a foul and rerow).

In the Punch Trophy he beat Laycock, Trickett McDonald & H Pearce, but had to succumb to Michael Rush. Tom Clifford was next opponent for £400. Beach won. But Trickett beat him £100 aside (Parramatta course) time 20 m 11 secs. Beach's friends were dissatisfied with the result and made another match £100 a side and Beach beat Trickett. Trickett was then not satisfied and they rowed a third match for £300 and again Beach won.

Today (16/8/84) people flocked from all parts of the Colony – the attendance on the River Bank was enormous – odds on Hanlan – Hanlan tried to break him in the first mile – but Beach hung on and won hard race by 1 1/2 lengths – then Wallace Ross of England challenged Beach for £1,000 on the Thames.