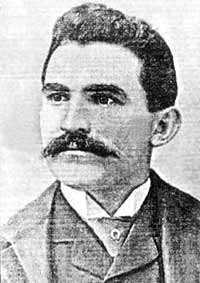 O'Connor from Canada was beating all comers and so a challenge was arranged. The betting was furious. O'Connor had £30,000 of American money on him and Searle's backers cabled £6,000. The crowd of 100,000 saw Searle win easily.

The Grafton Rowing Club history reports:
"Perhaps the greatest of all the professional scullers during this era was Henry Searle (1866-89). This young sculler from the Clarence developed his skills rowing his brother and sisters to school each day. He regularly raced others in the area and was an avid fan of Edward Trickett, but his own professional racing career did not start until 1884 when his father bought him a racing skiff.

"Over the next three years, Searle showed his superiority in this class of boat in local racing and moved to Sydney where he developed his fitness and skills in outriggers (often called wager boats at the time) under the guidance of Neil Matterson. 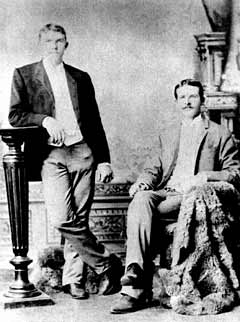 Henry Searle and his coach Neil Matterson in 1888

"In October 1888, after only 5 professional races in outriggers, Searle defeated Peter Kemp at Parramatta for the World Championship and a purse of £1000. After 4 more races in Australia, Searle went to England to meet the Canadian challenger William O'Connor. Searle easily defeated O'Connor on the famous Putney to Mortlake course on September 9, 1889, successfully defending his title.

Geoffrey Blainey in his book 'The Tyranny of Distance' discussed the significant innovation of the undersea cable from Europe to Australia in reducing the isolation of Australia through prompt news. Initially it still took two days for cable messages to make it to Australia. However, when Searle won the World Championship in 1889, such was the interest in the result that a new record time for a cable to Australia was achieved, 1 hour and 18 minutes!

"Unfortunately this was Searle's last race, as he contracted Typhoid on the sea voyage home and despite his excellent general health and fitness, he died in Melbourne on December 10. He was aged only 23.

"Just as most of Australia had followed Searle's meteoric rise to hero status, so they mourned him in his death. Huge crowds turned out for services in Melbourne, Sydney and finally at the funeral in Maclean. Crowds lined the streets wherever the cortège passed — it is estimated that 40,000 people lined Collins Street in Melbourne to pay their respects, with three or four times that many in Harris and George Streets in Sydney. (Estimates place the crowd as high as 170,000!) 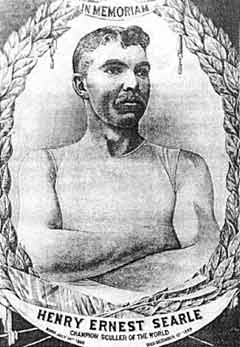 In Memoriam to Henry Searle

"This public outpouring of grief was something never before seen in Australia, and had many commentators giving their opinions on why this was the case. Some stated that this was a wonderful unification of Australian character and noted it as a contributing factor to the Federation of Australia a little over a decade later, whilst others decried the adoration given sportsmen of the time, dredging up old stories of alleged cheating, gambling, impropriety and supposed flaws in Searle's character.

"Regardless of the commentators' writings, the public continued to mourn Searle — various "gushy" poems appeared, e.g. :

... Upon the breeze
A piteous moan
Re-echoes o'er the hills. Our forest trees,
In monotone,
Are sadly whispering with bated breath,
And every leaf
Sighs deeply; for is not our champion's death
A nations grief?
From Grafton's stream across our land of gold,
To where the pearl
Lies on its western shore, the bells have tolled
In grief for Searle.


... and public money was raised for a monument.

"A broken marble column was erected on the Brothers Rocks in the Parramatta River. This point is the finish line of the course on which Searle defeated Peter Kemp for the world championship. This course became known as the "Ryde Bridge to Searle's Monument" course (3 miles, 176 yards).

"Henry Searle was recognised not only as the World Champion, but as the best sculler of that era. At 178 cm (5' 10") and a racing weight of 74.5 kg (11 stone 10 pounds), he was not a big man, but he was recognised as being a powerful sculler with an extremely long reach and stroke for the time. He was also noted for his staying power and ability to put on a spurt to break the opposition.

"Rowing commentators were very impressed with Searle's prowess, although some did comment about arching of his forearms when he had hold of the water:

His action is free and good; he sculls in good form, he has a dashing style with brilliant spurting powers. His feathering is clean, and the catch decisive and hard, and he has complete control over the slide.

"In addition to possessing a wonderful turn of speed, Searle rowed like a machine, had a perpetual swing in his boat, and used his legs, arms, and loins with splendid effect when sculling fast. Perhaps the especial characteristic of his sculling was its great length. He had an immense reach forward, and swung his body and shoulders right back, so that the stroke was very easy."

"Searle was recognised as the best sculler of his time. He so easily beat all his opponents that many people felt he had never been pushed to his limits. His premature death at the age of 23 meant that he had probably not even reached his full potential.

"Even though times are relative in rowing, an indication of his abilities can be seen in the race time for his defeat of O'Connor — after a hard first mile, Searle had the measure of his opponent covering the Putney to Hammersmith section of 1 3/4 miles (2800 metres) in a record time. Even though Searle was not pushed for the remainder of the race, he still completed the 4 mile 440 yard (6836 metres) course in a time of 22 minutes 42 seconds. This equates to an average 2000 metre time of 6 minutes 38 seconds which is very fast — but if the race is considered as 3 1/2 consecutive 2000 metre courses, then this is an outstanding time — only four minutes slower than the fastest eights achieve in the Boat Race.

"Searle was a champion, deserving his nickname of The Clarence Comet, but his tragic death prevented the world from seeing how good he really was. Interested readers are referred to Scott Brennan's book "The Clarence Comet" Sydney University Press for a good record of the life of Searle." 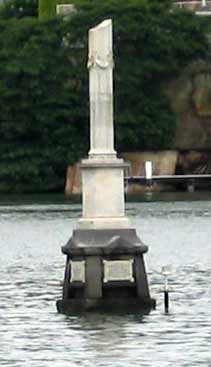 The monument was placed in this position to denote the end of the Championship course and also to warn all craft of the danger of going to the northern side of the monument.