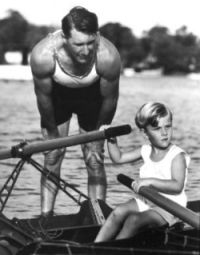 Following the retirement of Pearce (1947), a race was conducted for the Championship between the then Australian Champion Evans Paddon and most recent challenger, Max Fisher. Paddon won the event and the £100 side bet. The course was around three turns before a crowd of 8,000 spectators.

Both contenders were coached by their respective fathers. Fisher used his brothers Jack & Bill, as well as other members of the Parramatta River Sculling Club as pace makers. Jim Saul, who became world champion in 1952, acted as Paddon's pace maker in the lead up to the championship. Paddon trained from Green's Boat Shed on the Parramatta with most work being done in Hen and Chicken Bay.

Saul fell out of his boat during training one day and had to push his boat ashore. Padden reassured him that if there were sharks out there, they would get him. Back on shore, an eager press pushed forward to find out what happened. Paddon responded that a sea lion had attacked Saul's boat. The story had credibility as a sea lion was prowling the bay and so the press got a good story and even cartoons at Saul's expense. There was subsequently good newspaper coverage of the championship.

Paddon traveled down to Sydney on his fishing launch with sculling boats on board.

The race was tight with both scullers racing stroke for stroke until the last turn. Paddon then sprinted to a strong lead which he held to the finish. The finishing margin was two lengths.

Fisher got out of his boat after the finish assisted by referee George Towns. Fisher retired from big races after this event. 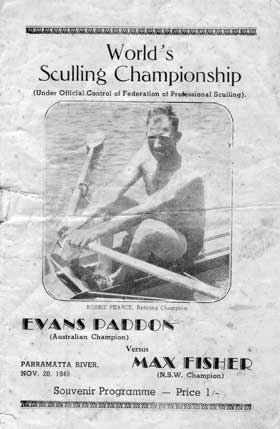 When World War II broke out in 1939, Evans Paddon joined the Air Force and spent four years in England and the Middle East, instructing and flying Mosquitoes on photographic high level reconnaissance.

Evans survived the war, only to return home and be told his days were numbered. He stated in an interview for the ABC: "I was given advice from the medical people that I had a malignancy, and only nine months to live. I didn't believe them and I still don't believe them!"

The tumour was removed, but without responsibility and seemingly a future, Evans ignored his father's offer to join him fishing, opting to "play around for a year or two." This was probably good for rowing as he sculled and won the World Championship.

He went on in the interview with the ABC to state: "The world title returned to Australia after Bobby Pearce retired and I competed for the title on the Parramatta River in Sydney, and was lucky enough to win. It was a pretty close go. Then I came back to the North Coast and lost a title, and then challenged it and won it again, and then I lost it again, and then I won it again, so I sort of gave it up after that," Evans says with a chuckle."

Evans Paddon has been described as the father of commercial prawning in Australia and was a successful fisherman.

The sport had declined enormously in importance post WWII. The only area where professional sculling survived was in northern New South Wales where amateur rowing was not well established. In all other parts of Australia, amateur rowing prevailed.

The course involved turning at buoys, three quarters of a mile apart and covering the course twice up and back to cover three miles. This method allows the general public to see the whole race from start to finish.

The race was conducted with a £300 side wager. 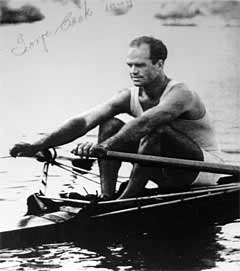 The race was won by Cook by 12 lengths and Paddon was disqualified by umpire George Towns for not turning his buoy correctly. In a letter to the local newspaper, Towns said:

I notice Evans Paddon says the mishap to him could have been avoided by more direct or forceful umpring. Exactly what he means by that I am at a loss to understand, as I shouted and waved my arms to try to give him direction when I saw he was getting off his course. Before the scullers got into their shells I had a short conversation with them together in which I pointed out that as no megaphone had been provided for me, I would not be able to make myself heard against the wind and that I wanted both to keep their eyes on me, in case I had to signal. Had Evans done so, he should have seen what I was doing.

I was asked not to approach the turning flags too close: otherwise the wash set up by the launch would interfere with the scullers on their trip.I said I would try not to make wash for them.

The flags were not high enough from the water, nor large enough to be picked up readily, even for me facing them, and would be less easily seen by the scullers approaching them with their backs to them. It is really not the umpire's job to show the scullers over the course, but I agreed to do this, as I did in the Paddon-Fisher race. This was not in the articles but an arrangement between the scullers. ....

Both scullers fouled the the turning flags. In fact they seemed to go almost over the tops of them, being rather too close...

As the rules governing the old Cup are not all suitable for present times, new rules are to be drawn up and these will be enforced by the trustees of the Cup and the federation in all races for the professional sculling championships of the world.