The World Junior Championships were conducted at Plovdiv Bulgaria without Australian representation.

Rowing Australia (RA) today confirmed that due to the ongoing COVID-19 pandemic, it does not intend to send Under 23, Under 21 or Under 19 athletes to compete internationally. This is in line with RA’s announcement earlier this year that stated the organisation did not intend to send senior athletes to compete at international regattas throughout 2021, excluding the Final Olympic and Paralympic Qualification Regattas for the Tokyo Games.

It is still the intention of RA to select and support our pathway group athletes irrespective of international travel throughout 2021, and RA will announce, post trials, U23, U21 and U19 Australian Rowing Teams. The plan is that these teams will assemble for various camps, before then joining Australia’s Olympic and Paralympic rowing teams in a World Rowing Cup 3 simulation regatta to be held at the Sydney International Regatta Centre (3 to 6 June 2021).

RA is dedicated to ensuring that its pathway continues to develop and that the future of our sport remains strong thanks to our underage athletes and the wider pathway network. RA looks forward to seeing these athletes compete at the 2021 Aon Australian Rowing Championships, ahead of their trials, and showcasing to the community the strength and depth of the sport in Australia.

But even that full squad did not get to race as planned with travel restrictions imposed by some State Governments. For example, the Victorians raced against other Victorian crews at a regatta at Carrum on the same weekend and received their uniforms at that regatta. 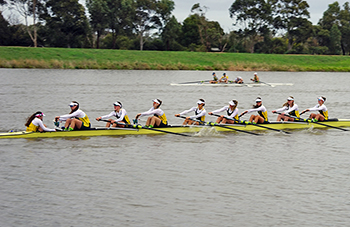 The women's junior eight at Carrum in June

It was an essential activity given that without it, no Australian under age teams would have been selected for two years.

This was a Sydney Rowing Club, Newington College combination.

This comprised rowers from the University of Queensland and Griffith University Rowing Clubs.

This crew comprised rowers from the Hutchins School.

Sophia came from the University of Queensland Boat Club.

This crew hailed from the Pine Rivers Rowing Club.

This was a Kinross Wolaroi, Canberra Grammar combination.

This crew was a Scotch Oakburn, University of Queensland combination.

This crew comprised rowers from St Catherine's and Merton Hall.