This was the first post war Olympic Games and was held in London as Helsink (which had been allotted the 1940 Games but which was aborted by the war) was not ready to conduct the Games. Rowing took place on the Henley course which was both widened and shortened to 1850 metres to accommodate three crews across. 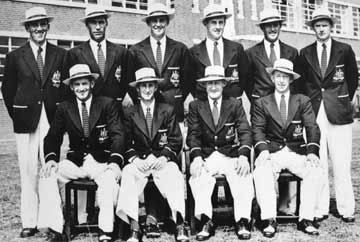 The Australian Amateur Rowing Council decided that an eight would not be sent due to training and financial difficulties but that a test race would be held on 3rd January 1948 for fours representing each State and that a sculler would be sent.

(As an aside, the NSW and Victorian Associations also sent lightweights fours to this regatta for a special challenge race. This was to be the forerunner of the Interstate Lightweight Four Championship which commenced 10 years later in 1958. The winning crew from NSW won easily and comprised Bow: Bert Harding, 2: Doug McCray, 3: Pat McCray, Str: Kevin Bond, Cox: W Kerr and coach K Manttan.)

The AOF accepted the recommendations on the condition that Bromley and Grace make the final of the Silver Goblets at Henley Royal Regatta and this to be at their expense. The pair did this and their selection was confirmed. 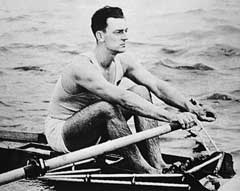 There were neither test races nor even any regatta races in pairs at that time so the initial selection of Bromley and Grace was on their rowing records. It was therefore not surprising that the AOF placed this condition on them.

Wood was in a class of his own and won by 5 lengths.

The performance of this crew was impressive as Grace was ill and in hospital up to a matter of a few days prior to the final. The final was won by Wilson and Laurie (GBR) who were best friends who joined the Colonial Service and were sent to the Sudan. Returning to London on leave in 1938, they entered and won the pairs. Then they went back to the Sudan and did not touch an oar for ten years. In 1948, they found themselves in Britain on leave and took up rowing. After six weeks training, they entered and won Henley again. This gave them selection into the British team. The "Desert Rats", as they were called, took the lead at the 1150 metre mark and fought off a late challenge from the Kalt brothers from Switzerland to take gold.

This was a disappointing result with the four departing from the event in the repechage.

The eights race was won by the Americans who won each race by at least 10 seconds. This University of California at Berkeley crew had obviously faced its biggest challenge in getting selected through very tight racing in the American selection process. They won the American test race by 0.1 seconds.

Photos of the 1948 London Olympics