These Championships were again the main qualifying regatta for the Tokyo Games and so the Australian team was focussed on qualification rather than medals. The results were still sound but not as expected.

Australia still finished third on the medal tally behind Italy and the Netherlands.

Australia qualified 8 Olympic boats and 2 Paralympic boats whilst winning eight medals. The men's boats qualified were the pair, four, eight and quad, and for the women, pair, four, eight and double. The Paralympic boats qualified were the Men's PR1 scull and the Mixed PR3 Coxed Four. Clearly Australia was hoping to qualify all but the single sculls and so were disappointed with missing out on both the lightweight doubles, the men's double and the women's quad. However it was pleasing to qualify the eights. 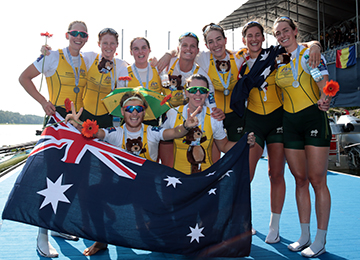 Rowing Australia Performance Director, Bernard Savage, summarised the week by commenting, “This week has had some incredibly hard and tight racing across all boat categories so to come away with qualifying eight Olympic and two Paralympic boats for Tokyo is really pleasing. I am very proud of this Team and the way they have gone about their business this week. To have qualified a full complement of sweep boats for both the men and women is particularly pleasing.