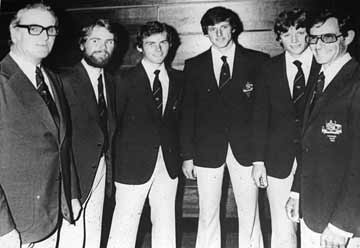 The Australian team sent to Bled in Yugoslavia was to that date the largest ever to compete in Europe. The results achieved were not commensurate with its size, as no crew was to win a medal. However this was not to create any dismay in view of the very promising performance of the men's eight and women's four.

The men's team was put through stringent testing prior to selection as had been done the previous year. The women's crews were again selected by separate selectors. This was the first season of Reinhold Batschi as the National Director of Coaching and he devised a very tough training program for all crews.

The work load was far higher than any previously established for any Australian team. There was a series of changes to the originally selected Team.

Unfortunately Colin Smith was forced to withdraw from the lightweight eight due to business commitments. The same fate befell David Boykett the coach of the women's four, but David Palfreyman was able to take over immediately.

Finally Robert Lang had to withdraw from the eight suffering back problems. Rob Lang was replaced by Ted Hale in the eight even though Ted was selected as the single sculler. Finally, Vaughan Bollen badly damaged his ankle and had to return to Australia from Europe. He was replaced by Michael Smith in the lightweight eight and the lightweight double scull with Steve Spurling was disbanded.

The eight was unfortunate not to do better. Their semi final race was one of the highlights of the Championships with the Australian crew finishing just under a second from Russia and New Zealand.

The start in the final was upset with equipment breakages in the American crew. The race was stopped shortly after the start after Australia had begun brilliantly. Unfortunately the second start was not a reproduction of the first and Australia was in third place most of the way down the course until New Zealand began a brilliant last five hundred metres rowing through Australia and the USSR to a silver medal.

It is also worth noting that in 1979 Australia named its first lightweight women's team which competed at the American National Championships and the Canadian Henley.