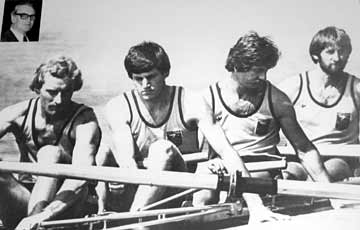 This was the first year of selection by small boat racing under the revised selection regime of Reinhold Batschi. The two fastest pairs were the standout crews taking it in turns coming in first or second well ahead of the other crews. Selection of the four was therefore clear.

Michael Smith was also the fastest sculler at that time. This was the one World Chamionship where Peter Antonie failed to gain selection. The missed selection pushed Peter into sculling where he excelled and became both a World and Olympic Champion.

The lightweight four became instant proof that the new selection policy was successful with a gold medal with no lead up regattas. All this occurred despite an accident on the water days before the heats which resulted in its new Empacher boat being damaged beyond repair.

A boat was quickly borrowed from a local rowing club and it too was damaged when the crew promptly used the bow ball to spear an East German junior pair in half. With two days to go before the heats both the Australian and German boats were repaired and both crews went on to win gold.

The highlight of course of these Championships was the gold medal win of the coxless four which won easily by more than five seconds in the final. This followed a win in the heat against the eventual silver medallists. As a result of a clash, second and third positions were re-rowed with Denmark taking silver over the original second placegetters Great Britain.

Michael Smith in the single scull regrettably had a poor row in his semi-final thus relegating him to the small final where he finished eleventh.

The women's lightweight squad was again selected for the North American Championships where they won the pair and four.