South Australia was in that exciting year, the Centenary of its official foundation. There was an uplifted feeling among its citizens, who had mainly managed to shake clear of the effects of the Depression, and that feeling was evident in the members of the Adelaide Rowing Club - especially the younger ones.

The new committee was vigorous and responsible and had a solid core of experience from other years.

Before the year was out, the Club had had a further boost to its morale by winning ten races in the four regattas it entered.

By the end of the season, it had won 22 races, more than any other club, but narrowly missed getting the Premiership through lack of experienced Senior oarsmen.

Enthusiasm was evident at all levels, and all functions were well attended.
Opening Day saw a large number of members and friends in blustery Spring weather and afternoon tea had to be transferred inside, but the races went on to a popular win by a crew already well known in the Club, two at the bow end from the recent Head of the River, K.L. Milne, and J. Syme and A.E. Levinson and Bill Stephenson the local strong man (whose favourite rating was flat out) in the stern, and steered by Ron Turner, the latest acquisition, who collected the Milne trophy at the end of the season for his prodigious number of wins as cox.

The newly introduced sculling race at Opening Day was won by Ivan Hare, a St. Peter's College master born at Ballarat, who was a good natured fitness fanatic.

Christmas Morning, too, was especially well attended this season, as the members had been advised by circular that there would be a special presentation to Joe Sharp for his eightieth birthday, and 132 members and guests applauded the man who had introduced the Christmas Morning Reunion back in 1902.

The Windara quartet sang some appropriate airs and the audience, which included Mr. Max Fotheringham in the Chair, the Lord Mayor, Mr. Cain, and his City Engineer, Col. W.C.D. Veale, "Normie" Gratton and "Tacky" Hannan K.C. sang the carols with gusto.

The Swimming races were resurrected and they were well attended too, and made a profit after paying the hire of the Unley Crystal Pool and the cost of the trophies, which were distributed by Ken Milne, a great performer in his day.

The boathouse needed painting, and the contract was let to one of the members, Norm Buckenara, who did a fine job, while Claude Coogan had the cane chairs revarnished at his furniture factory.

Crews that went to the Murray Bridge and Mannum regattas came back with four cups, all for maiden events, and two more maiden events at Port Adelaide, but were not able to assemble a senior eight to contest Champion 8's, nor a Champion 4.

However, two members, J.C. Williams and G.M. Sheppard were chosen for the King's Cup squad, Williams at No. 3 and Sheppard as spare man, and that crew won the race at Murray Bridge - rowing in the Adelaide Rowing Club's I Zingari VII. 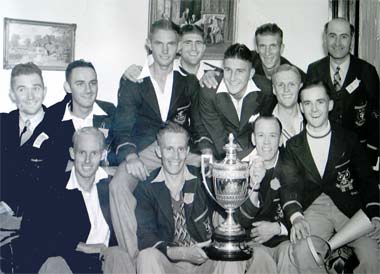 Other functions that bore witness to the surge of enthusiasm were the dinner, the dance and the other club regattas, Grayson 4's, Clucas pairs, I Zingari 4's, after which a series of photographs were taken of the winning crews during the season, the maiden 4, that remarkable tub slide crew from last season, having won nine races at S.A.R.A. regattas for the season.

For the past three years Adelaide Rowing Club had taken over the running of the Autumn regatta on the Torrens, and this year got permission to call it the Metropolitan regatta, and collected subscriptions for a cup to commemorate its most famous oarsman, A.J. Grayson.

The Grayson Cup was contested for the first time on April 10th 1937 and was won by an Adelaide Rowing Club senior eight assembled from rowers who had not been available for the strict training required to row champion 8's, mostly for business reasons, but who managed to win this race, over 1000 yards by one foot!

Four other Adelaide crews won their races, two of them 8's, so it turned out to be a fitting end to a great season, but not quite enough points scored to win the State Premiership.