The escape from the Great Depression was really beginning to be felt, and the membership roll jumped up by eleven, of which the bulk were junior active. This was all very encouraging, but it was noticeable that many more of the experienced oarsmen who had contributed so well to the previous season's Premiership win, were unavailable for competitive crews because of demands made by their chosen careers and marital status. This was reflected in the eleven races won, only two of which were in seniors, and the rest in junior and maiden fours and pairs, four by the same tub-slide crew. 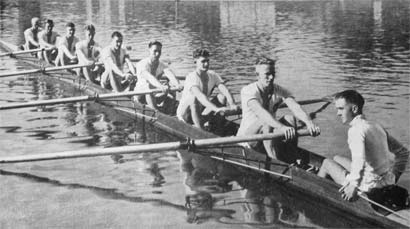 This was, indeed, a remarkable crew, stroked by Hal Ledger, barely 9 stone, and ably supported by E.P. Cherry, R.K. O'Connor and K.B. Roennfeldt. Earlier in their rowing careers, those fortunate and enthusiastic young men must have found the magic formula that some rowers pursue year after year, to row in a crew that fits perfectly together.

They not only won the races recorded, but remember that as a tubslide crew, they probably won at least twice that number of races just winning heats to get in the final.

In the following season this phenomenal combination won 8 races in 4's and combined with four others to win 5 races in 8's.

Signs of the times were to be seen in the shift of emphasis in the activities of the Club.

Swimming races had been abandoned; young men straight from school were joining up and filling crews in a category that had first been tried four seasons ago and was now working well - junior active. The boathouse was full of young men, and the members of the Committee were senior oarsmen who had mostly given up rowing in S.A.R.A. regattas.

The emphasis which had been placed in former years on social events and participation by prominent people in the community was being replaced by functions involving less organization, and put on for a younger set. The flannel dance had superseded the formal Ball.

Henley-on-Torrens was treated as a gala night, with the boathouse decorated with bunting and lights, and members in their gay blazers made a splash of colour in an open sports car in the procession down King William Street.

They also revived the practice of entering a decorated boat in the procession on the river, the theme of theirs being "The Volga Boatman".
Concerts and musical evenings were no longer held, but annual dinners and the Christmas Morning reunion had become very popular. 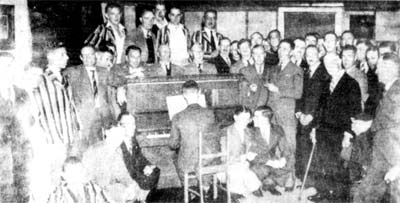 Vice Regal patronage was a thing of the past, although the S.A.R.A. retained it, having inherited it in 1923 from this Club.

J.H. Gosse's concept of encouraging training with his trophies for the greatest mileage rowed by a member in one season and for the crew that rowed the greatest number of miles in one day on the Torrens was abandoned, as more and more races required more cews to give their full time to training for the next race, and everyone was too busy to spare the time to keep mileage charts. Wallaroo and Tailem Bend were on the circuit now. 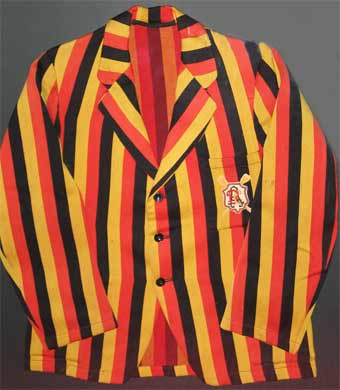 Two other old members died. G.H. Dean was one of the original I Zingari Club foundation members of 1882, and that most famous of all rowers, A.J. Grayson, a member since 1885.

Both were Honorary Life Members, and Alf Grayson had been present at the previous Christmas Morning gathering just five months before. He was 68, known and admired by all in rowing circles in South Australia, a classic great rower and father figure in the Club.

King George V also died, and Edward VIII was expected to succeed to the British throne, but abdicated; but the Adelaide Rowing Club forged ahead towards a very successful couple of seasons.