This would prove to be a season of consolidation, of getting back to normal, and being mindful of cutting down on spending. The Club was 50 years old in May and suffering from middle age. 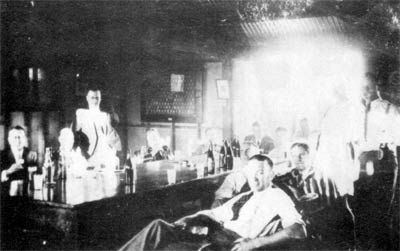 Drinking the Club out of Debt circa 1932

The Annual General Meeting and the Dance, and, of course, the Christmas Morning Reunion, were all held in the boathouse.

The only new boat was a tub four, and the trip to Berri and Renmark regattas was not undertaken, although crews went to Murray Bridge and Mannum without success.

The Club mourned the death of a famous member, H.H. Dutton. Shuttleworth, Linnett, Dermott, Jay and Sabey left the fold, and C.E. Runge, R.E. Alexander and Hurtle Morphett joined it.

The vexed problem of finding a suitable caretaker to prevent the recurrence of a fire was solved, after a false start, by installing a likely chap, J. Northcott, and cooking facilities had to be provided and approved by the insurance company. He was fixed up with a kerosene stove, which, in those Depression days, was a normal solution, even in a timber framed structure.
The Captain donated a crystal wireless set for the caretaker's use, overlooking the fact that he would not hear an intruder when he had the headphones on, and the club would be up for a wireless licence.
Money had to be raised to send the King's Cup crew away to Brisbane and a bridge party was held for this purpose, also a competition at Henley-on-Torrens day.

Swimming races were held at the Unley Crystal Fool in the evening once again, and a dinner and another dance was held during the winter months to hold members' interest.

By winning six races during the season, the Club managed to justify its existence, but not to do anything noteworthy, certainly nothing to foretell the improvement about to happen.

With the same Captain and Vice Captain and Secretary and an energetic Committee with plenty of experience, the season got off to a good start.
Then some very promising young members joined and made their mark straight away. Names well known by older members still in the Club today: Frank Nicholls, H.V. Fairweather, Birk Martin, A.F. Bolton, Brian Walker (later widely known as "Black Jack" in the Air Force), Bob Taylor, Ian Hamilton, and Walter Wadey was back from interstate.

A new caretaker was engaged, who was to become an institution in the Club - J. Borg, who proved to be a very useful, reliable man, who was later admired for his efforts at transforming the unsightly mounds of filling in the railway yards behind the boathouse with his flowering rock gardens.

Straight away, crews began winning races. A senior 8, a maiden 8 and a lightweight 4 in the Opening regatta, three races in 4's at the Berri-Renmark regattas, a minor race at Port Adelaide and a senior 4 at the Autumn regatta; which earned them the donation offered by J.H. Gosse of £25 if the Club won Champion 8's or 4's or the Ladies' Challenge Shield (the Senior 4 at Autumn).

One of the club regattas, I Zingari 4's, was still being rowed over a mile on the Torrens and the crew that won it had three men in it that later on, with the addition of Wilf Alexander at Stroke, was entered for the Stewards' Challenge Cup at the Melbourne Centenary Henley-on-Yarra. The other three were John Williams, Jack Giles and Colin Runge, a formidable combination, which was beaten by an even more famous 4 from South Australia, the Berri 4 of Hill, Jungfer, Wilson and Moritz, who rowed in the former Murray Bridge style, the king pin being Stan Wilson, at 3, also known as "Concrete" Wilson, who was still rowing for Berri crews in the late 40's.
The Club came fourth in the State Premiership, up from the previous season, and was getting set for an even better season.

This was the season which came in with some promise of relief from the debilitating Depression.

Melbourne was having its Centenary celebrations, the great Air Race, and other exciting events like the Centenary Henley on Yarra, which prompted an Adelaide Rowing Club 4 to put in an entry for the Stewards' Challenge Cup, as has been mentioned. 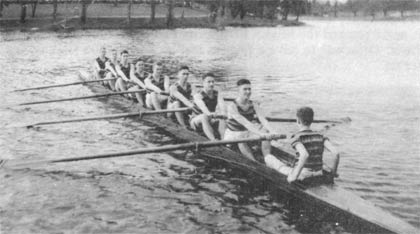 A Premiership At Last

Adelaide University had already won the Oxford and Cambridge Cup at Mannum in record time, coxed by a former club coxswain, P.M. Cudmore, and coached by Stan Facy, and a member of that crew, H.R.S. Newland, joined Adelaide Rowing Club, and Peter Cudmore rejoined.

Keith Forwood was the new Captain, and Dick Clark was Vice Captain, and they had a strong Committee backing them, and before the season finished, the Club had won twenty races, nine of which were in 8's, thereby winning the State Premiership.

Strangely enough, this was done without winning Champion 8's Champion 4's, or Champion Junior 8's. The points scored by junior crews accounted for well over half of the total winning tally.

With so many crews entered for a total of eight regattas, they still managed to hold six separate Club regattas and the usual social functions, and even then were not represented at three country regattas, Renmark, Berri and Wallaroo.

On the strength of this, George Towns was commissioned to build a best and best 8 the same as the one he built for the winning A.U.B.C. crew, and the S.A. King's Cup crew used it in their training and contest on the Nepean River in N.S.W.

That crew had three Adelaide Rowing Club members and the spare man rowing, which meant a severe handicap to the Club's senior crews in the second half of the season.

The A.R.C. representatives in that crew were H.C. Morphett, W.W. Alexander, and J.C. Williams, with E.T. Major as spare man.

All in all this had been a very successful season, and at the celebration dinner at the Oriental Hotel, a pair of very amusing characters entertained members and guests with their repartee and music, Messrs Dean Hay and Rex Dawe, leading lights in the University Revue, which to this day, has never reached the heights of comedy and entertainment of the mid-thirties. Dean was to have a famous son become a Club Captain much later on. 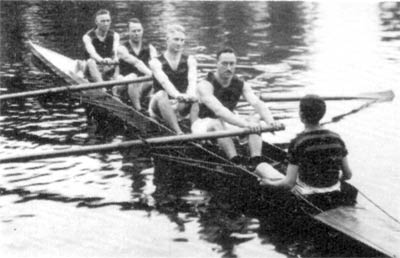