Opening Day was becoming quite a magnificent affair, and probably reached its peak in 1894, (more of which later).

The Club was content to hold its own regattas and concerts and so on, not bothering a great deal with contesting the S.A.R.A. regattas although they managed, in the Autumn Regatta of 1892, to win five races on the Torrens, three of them by the same crew, stroked by the evergreen Fred Poole, with Alf Grayson in the 2 seat.

In December, 1892, they won Champion 8's at Port Adelaide, stroked by Alf Grayson, so obviously they were keeping a balance between serious rowing and other sports and the social graces.

Strelitz was an example of this style of man - an accomplished musician, charming, debonair, but also a member of the Champion 8 crew. John Milne, the Captain, somewhat autocratic, ambitious, a leader, but also a crewman behind that swashbuckling genius, Grayson.

For the lesser lights in the Club, there was always some function or another to hold their interest and involve them; the Heseltine Cup for Sculls one day, Double Sculls in a couple of weeks, Pair-oar races, Scratch Fours, Trial Fours, Senior-Junior Fours, all with starter, judges and afternoon tea served, and trophies to be won. Cards were issued to members who could invite their young ladies and any chaperones dictated by the late Victorian code of social proprieties and the poor, overprotected dears loved to be involved in a manly sport and yet be able to fuss around with teacups and listen to the strains of a string band.

The whole year's activities helped to make the Adelaide scene.

But the cold winds of a minor depression were beginning to blow.

Members were resigning and failing to pay their subscriptions. The overdraft stood at the maximum set by the guarantors of £150.

The Club had ordered a new 8 because they realised they had a good chance of winning Champion 8's with the talent they had in the senior ranks, so as we have seen, they stuck to their guns, used their Vice Presidents to guarantee another £50 overdraft, put on a minstrel show concert and opened a fund to raise contributions for the eight, which they followed through with vigour.

Members who could not pay their subscriptions were written off the books but told if they could manage to pay later, they would be reinstated without having to pay the entrance fee.

They even got Fred Poole to visit the boatbuilders, while he was in Melbourne on business, to make sure they had all the minor modifications in hand, like longer slides, rigger details, splashboards and so on. This he did and made a full report, spurning any claim for expenses he incurred.

That boat, named as has been described by the Club's favourite lady, the Countess of Kintore, carried the Club's 8 to victory in Champion 8's in December, 1892.

The Countess sent a personal "autographed letter" to the Captain, with a photo portrait of her daughter, The Lady Ethel, wishing the crew a prosperous and successful New Year.

The brooch presented to the Countess still had to be paid for, and as club member L.H. Suhard's subs were outstanding, it was suggested that his account for the brooch would be reduced by his debt to the Club, but part of the item in the treasurer's financial report: "Christening 8-oar boat - £13-17-3" was the balance paid to Suhard for the brooch £4-15-6, and it was disclosed in committee that the Captain had personally paid £3-10-0 towards the cost of hiring the tug "Yatala".

Amazing what a pretty woman can do to a lot of hard-headed rowers, hell bent on impressing her, and blind to the £200 overdraft and members with empty pockets!

But as always they struggled out of the trough. C.J. Barry presented trophies for competition in club 4's, E.S. Clark presented a notice board, the lady licensee of the Scotch Thistle presented chairs for the use of the Club's guests and Fred Poole presented a machine, quite a famous machine, which Clouston, Port's famous stroke wanted to copy for the use of his own Club, for coaching oarsmen indoors in the correct style of rowing, complete with diagrams.

The boxing and wrestling class assisted in a "Musical and Athletic Entertainment" at the North Adelaide Institute in June, 1893 with bouts of boxing, fencing, wrestling, demonstrations of club swinging and dumbbells, and a concluding performance by Messrs Lance Milne and the musical items. 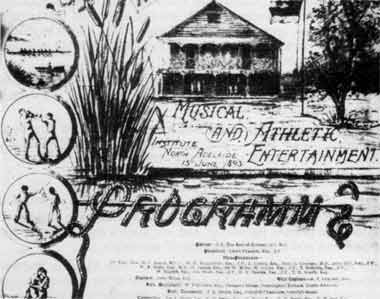 The Old Commercial Bank, having refused payment on the Club's cheques, was abandoned in favour of the National Bank, and the overdraft was whittled down to £150 and less, the guarantors having to sign up once again.

Further activities during the winter months to hold the members' en­thusiasm were first a Billiards Tournament at the Globe Hotel, with handicap in games of 250 points ranging from scratch to 150 points, the contest was won by J.C. Cairns, the limit man, on 150 from Harry Dean, the scratch man.

Wins on the Water and on Stage

So notwithstanding the hard times, the Club's popularity and spirit was at peak level. This was made abundantly clear at the S.A.R.A. Opening Regatta when the Club won 3 races including the Ladies' Challenge Shield, and although not successful in Champion 8's or 4's, the `Conversazione' they put on in the Town Hall in July, 1894 was a most unqualified success.

A brilliant audience including the Vice Regal party, the Mayoral party, Naval and Military dandies, lavishly gowned ladies and their escorts in full evening dress, applauded the items, nine of which were musical, five were set poses depicting well known works of art and a club swinging exhibition, with enthusiasm and delight.

The hall was decorated with palms, reeds, flags, crossed oars, a sculling boat, rowing trophies all in the true Victorian style of the-more-you-have-the-better-it-must-be.

The Heseltine Cup for Sculls was won for the second time by E.S. Clark who thereby kept it, and it was not long before someone else donated a cup to take its place - the McKechnie Cup.

The Club's senior coach, Mr. W.L. Burton, having had success in 1891 and 1892 in Champion 8's and been made an honorary member for a year, decided to leave the colony, and was given a send off at the Scotch Thistle Hotel and a ten-guinea purse of sovereigns.

His successor was a man called A. Clark, from Victoria, and having coached crews in the colony that had won most of the inter-colonial races since their inception, was thought to be a valuable acquisition.

Fred Poole managed to find him employment, and the Committee made arrangements for him to have sleeping quarters in the boathouse, thereby saving Jolley's retainer as caretaker.

Clark coached the exaggerated shoulder-lift style, and the senior oarsmen did not think much of it, especially when they were beaten badly in both champion 8's and 4's, so Clark did not last long.
Next season, they asked Fred Poole to coach the senior crews.

In the summer of 1894, the weeds continued to be a menace in the Torrens, and one man fell in the water, and being a poor swimmer, and hindered by his clothing and the weeds, drowned.

In January, H.M. Orr, that man of many parts, senior oarsman, past Secretary, expert boxer and wrestler, was rowing in a crew near the City Bridge when he saw a member of the Norwood Rowing Club in difficulties in the water where the weeds were thick, so he dived over the side and brought the man, who was unconscious by this time, to the side of the boat, and with the help of others in the crew managed to get him aboard, and eventually revived him, and thereby saved his life. Twenty two months later Hugh Orr's friends gave him a farewell party. He sailed for England to manage Elder Smith's London office in November 1896.

Not long after the success of the "Conversazione" the Club invited a record number of guests and kindred club members to their Opening Day on November 3rd. The weather was glorious, and fully seven hundred people turned up, including the helpers at the Conversazione and artists from the Brough and Boucicault companies, then performing in Adelaide. Invitations were sent to His Excellency the Earl of Kintore and party, the Mayor of Adelaide, all the Vice Presidents and the President's daughter was invited to name the new practice 8, and act as coxswain for their first row in the boat.

The new Club flag was at the mast, and masses of bunting decorated the scene, the Captain's wife, Mrs. Milne and her helpers dispensed tea in continuous session in the marquee alongside, and Setaro's String Band played while various artists gave vocal items arranged by the inimitable Joe Sharp. Club members took guests for a short row on the lake in the ten boats they had hired from Jolley for the afternoon, and a Club Regatta for Scratch Fours was held. The winning crew was stroked by Fred Acraman, whom some present day Club members might have known, with N. McGeorge at 3, F.A. Combe at 2 and C. Frampton at bow. Mrs. Milne presented the trophies, so she must have been a very busy lady that day.

Since November, 1886 Adelaide Rowing Club had actively helped to promote rowing in the private schools of Adelaide at that time. A Mr. Dobbs was offered the use of the Club boats for his boys to use before 5 p.m. on week days, and before 2 p.m. on Saturdays at an annual fee of 20 shillings per annum, which he accepted. It is not known for certain which school Mr. Dobbs represented, but it is thought to be Whinham College. St. Peter's and Prince Alfred Colleges both had crews on the lake, and the Association listed schoolboy races in its regattas in the early 1890's. Adelaide High School began rowing 1892, Way College in 1893, and the Blackmore Shield was initiated for schoolboy competition in 1893.

In 1894, Adelaide Rowing Club had the honour of electing 2 men as members who were both famous head-masters - the Rev. (Later Canon) Henry Girdlestone, and Mr. W.R. Bayly, of St. Peters' and Prince Alfred Colleges respectively, affectionately known as "Jingles" and "Bill".