The 1990’s started how the 80’s finished up, with the club members working hard to raise money, via a lawn mower raffle and more concreting jobs. This is also the year that the incorporation was completed by Lethbridge & McGowan staff for a minimal cost. The club also finalised their constitution bringing it up to date in 1990.

The club during the late 80’s had a few issues with break in’s so in 1990 they spent $950 and installed a security system. 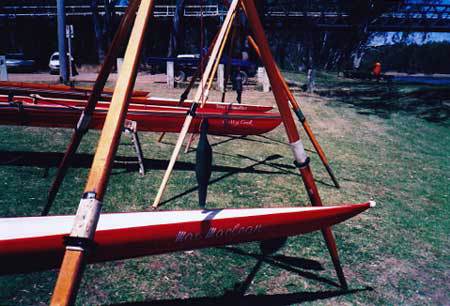 1990 Christenings of the Terry Cornelius, Garry Cook and Max Maclean

In 1990 the flood waters were enough of a concern that the boats were moved out to Max Maclean’s shed for safekeeping. Robert O’Halloran mentioned in his captain’s report how our fleet of boats would be one of the best in the country area.

December of that year saw the club make the decision that life members only need to pay affiliation fee if they compete, there is no membership fee to the club.

1991 saw the club break a 30 year drought by winning at the Footscray Regatta (first since 1960). The Novice 4 girls won and then backed it up with a win in the U16 four. The crew was made up of Melinda Carlisle, Cher Hetherington, Melanie Atkinson, Simone Binns & Michelle Corfield as cox. The Novice 8 men also had a win against the much more experienced 8 rowers – this crew consisted of Rick Good, Glen Martin, Esad Skalic, John Bookluck, Robert O’Halloran, Tony Dale, Terry Salmon, Rohan Hillas and cox Joel Dunkley.

March 91 saw the club be represented at the Combined High School Championship in Sydney in conjunction with Corowa High School. The girls four won this regatta.

In 1991/92 Robert Eyers designed a new & fairer point score system that is still in place today.

The major fundraising during this season was tree pruning, with Max Maclean donating his tray truck at all working bees. There was 15 weekends from Feb 91 – Sept 91 that members gave up their time.

At the end of 1991 a training scull was written off in an accident whilst returning from Bendigo regatta so a new one was ordered via insurance. The new scull was named ‘Kelvin Howard II’ and the old scull (fixed up) be renamed the ‘The Dunk’ after Garry Dunkley.

1991 also saw a ladies committee form with K Howley the inaugural president. They held BBQ’s and at Essendon they provided breakfast for $2.00 per person. They also organised the food stall at the MRA regatta. They wanted their first lot of money to go towards the striking of a medallion. 1992 also seen the treatment of female rowers come under scrutiny via a complaint made to the committee.... the club was committed to prove that they would not favour the male crews. This was the year the club decided to start to save for a new regulation four.

February 1992 saw 24 oarsman & women compete at the Essendon regatta, they also then followed that up to break a 10 year drought at Banks regatta winning the Mens Intermediate 8 with Rick Good, Glen Martin, Scotchy O’Halloran, Dave Clarke, Esad Skalic, John Bookluck, Terry Salmon, Rowan Hilas and cox Joel Dunkley coached by Gus Good – these boys were noted to have rowed 160km in 14 days of training. At this stage in 1992 Corowa was coming second in the 2nd Division Country Premiership.

To encourage more school kids to take up the sport on a Sunday morning in February they had 20 kids and 5 teachers come down to “learn to row”.
The ladies committee presented a cheque to the club for $500 that was used to purchase a second hand regulation four brought from Hamilton Rowing Club, and the ladies got to choose the name. One fundraising raffle they conducted was of a porcelain doll which raised $870. The Corowa High School also purchased a regulation four from Hamilton.

The committee paid $1000 towards the updating of the trailer which was listed as first priority over the winter in 1992.
During this period the club also purchased a weekly tattslotto ticket – maybe hoping to finally extend the shed.

The club had plans to submit a proposal with plans to council to put an extension on the shed for increased boat storage, toilets, change rooms & gymnasium area.

There was a special meeting in August 1992 to approve the design of the mediallion that would be struck.