With strong team work the club was able to raise funds and start replacing the racing fleet of boats making our crews able to use modern technology. Some of the unique raffle prizes on offer were a 14lb cod, ½ gallon wine even a boat & motor (1975) when they were seriously fundraising for a new four (Gus Good) and a second hand eight which was finally purchased in 1977 for $200 (Cora Howard). 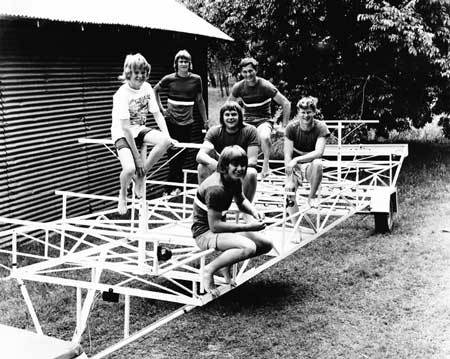 The sport saw a major change with the introduction of Kevlar boats and oars replacing the traditional timber boats and oars. In 1978 it went to a vote on the committee as to the kind of boat they should buy – Bond Wood or Fibreglass tub pair – the vote was 4 in favour of fibreglass (Corowa Members)

The purchase of boats and oars during this period was also assisted by the Social committee of the rowing club via the discos they held. In 1977 the social club had over 30 members and decided that they would have a barrel every fortnight to raise money for the rowing side.

The committee also considered building a new shed to house the growing number of boats and equipment, they even got quotes, but ended up building two skillions (one at back and one at side) to be able to house the 8 and the boat trailer that they built in 1973 for a pricey sum of $180.19, with a lot of materials given at a great discount and with N Willett from Bob Jane Pty Ltd donating 3 good second hand tyres. Another way of fundraising during this period saw the introduction of a silver circle, which was run quite often.

The school rowing program that is so strong now has history back to 1962 (from high school corovian) but was not constantly ran every year, with the school expressing interest in 1975 to start it back up again under the assistance of Barry Powells and Mick Turner. In 1977, Barry Powells purchased a tub four from a Sydney club that the Corowa High School paid for – this boat had the oars included.

Another fundraising idea that is still going strong today is the meat raffle at the local hotels. In 1976 John Elmore who was at the Globe Hotel offered Gus to run a meat raffle following the football season. In the following year, Gus offered to donate 12 bottles of beer to the person that sold the most tickets over the next 26 week duration....no record as to who won this competition though.

In 1977 it was noted that Corowa Rowing Club did not have any wins at registered regattas, but did at club regattas winng Open & Novice fours.

During the 77/78 season, there was a lot of interest in the club, with one open day attracting 120 people. The club competed in beginners and novice regattas with the club winning at Wagga, Corowa, Wahgunyah, Yarrawonga, Rutherglen.

The presentation night in 1979 was noted to have been held at Ray Pullings house and how everyone was sozzled by the time the keg went off at midnight. Also in 1979 the social club held a bbq which was a great success and that same night the ‘DC Brown’ was burnt by George Rosser. 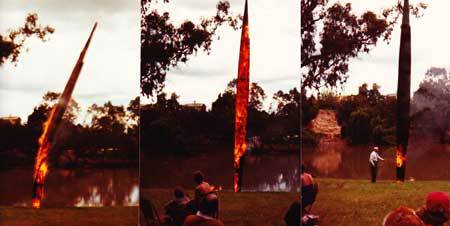 The burning of the D C Brown

At the start of the 1980 season it was discussed having a club night once a month to keep people interested, with Mark Howard even suggesting that a hungi be held.

Electricity was put on to the shed in December 1979, so next step was to build toilets in the shed. The toilets were completed by August 1980 and they cost $120 to build.

1980 saw success at the MRA regatta with Corowa bringing home the MRA shield for the most wins. During this period we purchased a second hand pair from Yarra Yarra for $20 and we were given a tub four from the YMCA club in Melbourne.

In the 79/80 season Ross Maclean won best first years oarsman, good to see 33 years later he is still heavily involved in the rowing club and still competing on a regular basis.