During the period of growth, 4 club members (P Gamble, M Good, J Akrap, J Sinclair) also signed guarantees at the bank so the club could get a bank loan of $2000 to help pay for the pair, and when that was paid back they stayed signed up as guarantors for a $5000 overdraft in 1984.

In 1982 the boat trailer was upturned by horrific winds at Ballarat which damaged some boats.

1981/82 saw the club win the Junior 2nd Division premiership– this was the first time that a country club had won the premiership. The club also finished this year by ordering a new tub scull at a cost of $1778.04.

Quite often during this period the club purchased oars through the Corowa High School as to save sales tax.

In 1982 a crew won a treble of wins at Melbourne, Horsham and Dimboola –G McNamara, M Cook and N Good (Cox).

The first year woman are mentioned winning trophies at a presentation night are in 1983 with Cassendera Good winning Most successful oarswoman and Janet Quihampton winning Most improved oarswoman and Tammy Good winning most successful coxswain (it was called section 2). This year also saw Robert Eyers win the Best Clubman Award, good to see he is still working hard for the club so many years later. 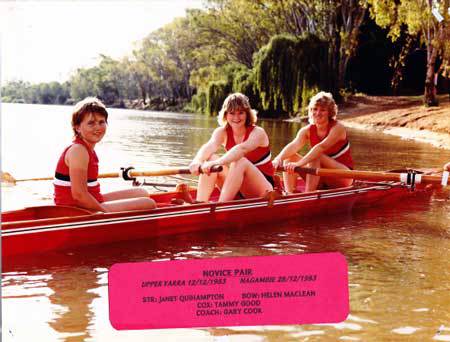 In 1983, the club was offered an unusual offer by the Globe Hotel social club to purchase a 1/4 share in its pool table, the club decided not to go ahead with this offer. Also in this year we ordered a new eight from Jeff Sykes which was the first time this mould was used. The 4 members extended their guarantees. This eight was named the Corowa Members 1982/83. Max Maclean then donated $200 to go towards the purchase of oars for this boat.

In 1983 life membership was awarded to Leigh “Gus” Good.

In February 1984, the senior coach Gus advised the club of its advancement to junior standard. This year seen a wool drive take place to fundraise, the club also cancelled marine insurance during the winter months in an attempt to become more financial.

The stand out performers in 1983/84 season were Robert Eyers and Anthony King in the maiden pairs and Helen Maclean & Janet Quihampton in the Novice pairs. The Junior 8 also rowed well during this season. Again in 1984 it was proven how committed our members were in that 6 members all donated $40 each to cover the costs of double scull riggers. (D McNamara, R Maclean, M Pulling, M Howard, S Hughes, L Good)

Jason Binns was the stand out rower for the 1985/86 season with him winning the most successful oarsman, be part of the most determined crew (Novice pair) and also the best clubman.

It was in 1986 that the club took steps to becoming incorporated. During this season Mark Howard (Captain) advised that the club did not have a successful year on the water, but the club was well represented and that all boats were in good condition, this was reinforced by the senior coach Gus, in that while numbers were down, there is promise for the future.

Another function that is still happening every 2 years started in 1986 when Marlene & Kelvin Howard requested permission to use the shed for their family Christmas function.

The shed was repainted in 1987 by a crew of members including Kevin & Colin Hall, Jason Binns, Rowan Sorenson, Chris Pensini, Gary Cook and Mack Good. 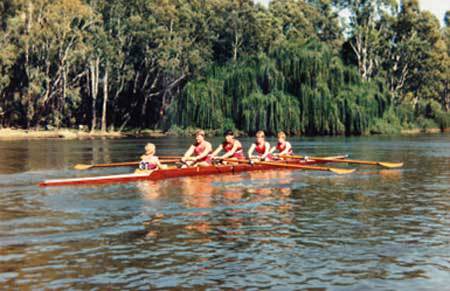 The social club ceased being a separate entity in 1987 as well. In August this year we purchased Wahgunyah’s racing four “Des Pearce” for $2000. (Not sure what happened here as this boat is still at Wahgunyah)

At the AGM in September 1987, a motion was moved for Mark Howard to be awarded life membership; this was award in May 1988.

During this period of the 1980’s the major raffle every year was 2 bikes (man and woman’s).

In 1988 Uncle Toby’s (Best Foods as it was known then) donated $300 to improve the sheds roof on the west side of shed.

During this period, the membership of the club waned a bit so in July 1988 it was decided to run a fresh blood campaign to get some young people interested in rowing again. This year they also sent letters to all present, past and associate member’s re the upcoming AGM.

Interesting to note at this stage the club was busy chasing up all outstanding monies as they were still over $2000 into the overdraft, so maybe why a big membership drive was launched.

It took until March 88 to have the first registered regatta win for the season at YWCA Albert Park with S Ronfeldt and R Hillas with Greg Dickins cox winning under the coaching of Gus Good.

August 1989 saw the club finally climb out of the overdraft, and start to trade profitably. The club achieved this by the hard efforts of the members doing raffles, concreting jobs and tree pruning. At this time Gus was looking around for a second hand regulation 4 to purchase from Leichardt Rowing in Sydney for $500 (The John Harrison).

The rowing calendar was a bit busier before xmas in 1989 than now, with Yarrawonga hosting 2 regattas, Upper Yarra hosting one, Nagambie and then our own local regatta.