22. Early Days of Rowing on the Murray

The Adelaide Rowing Club clinker four was sent to Murray Bridge, along with boats from Mercantile and Torrens Rowing Clubs, by rail, where they were kindly transferred to the tender (barge) of the P.S. "Avoca" - Captain Arnold - heading upstream for Mannum, by oarsmen at Murray Bridge. Most of the crews from the Adelaide clubs joined the "Avoca" at Mannum on the evening of 28th December, departing at 9 p.m.

There were 87 representatives from Adelaide and down-river clubs on board, and everyone had to find a nook or cranny in which to doss down for the night, although there was not a lot of opporunity for sleep, what with the slap of the paddles on the water, the water on the hull, the vibration of the steam engine and the hiss of the steam at each long stroke of the piston.

Every so often there would be stops - at Morgan, loading and unloading, at the locks, and stops for fuel in the form of six foot baulks of river gum, to be loaded and stacked by the boiler hearth - good exercise for rowers. At each stop the canny ones who had brought fishing lines were excused the Yo-oh Heave Ho, and some good Murray cod were caught for the next meal. Sam the cook and Horace the engineer were colourful characters, and full of anecdotes and good humour, keeping all on board amused and active helping with handing round the meals and keeping up steam.

Berri was reached on 30th December in the afternoon, leaving plenty of time to practice for the regatta next day. Our boys were entered for the Maiden and Junior 4's but met with no success. After a smoke social and an eventful New Year's Eve, the journey to Renmark was continued, and, with very little sleep, the two crews found themselves competing in Maiden and Junior 4's again on New Year's Day. Surprisingly, although not winning, the boys gave a much better display than at Berri.

The return journey was begun at midnight after some celebrations, and nobody had any trouble getting to sleep, the engine being much quieter running downstream (ahem). Stops were made at Loxton and Waikerie and another unscheduled one when we got stuck on a sandbar between Morgan and Cadell, where everyone stripped naked in the water helping to get the boat clear. Mannum was reached at 2 p.m. on 3rd January.

Mending a puncture in the 1920's on the way to Mannum.

Rowers & officials from City clubs at the Mt. Barker refreshment room on their way to row in a Murray River regatta circa 1926.
4 From L: J.P. Marcus, 7, Len Grummet, 10, Nip Boykett. 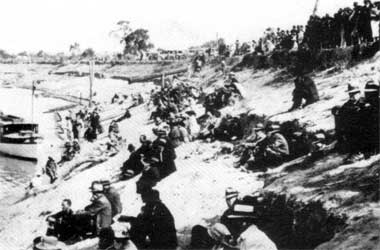 It was a most memorable five day trip, and full credit goes to Captain Arnold, Sam the cook and Horace the engineer.

Footnote: Len Grummet wishes he could remember more about the yarns they told on board, the luncheon put on by the Renmark Rowing Club and the New Year celebrations at Berri, but 56 years is a tidy span to recall. 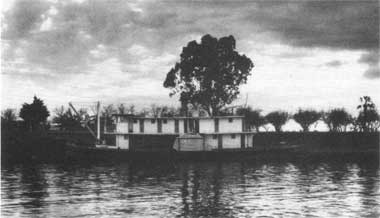