Willie Hay's business commitments forced him to step down, which was a pity, in view of the great promise of the talent now available to row. Mike Lohmeyer came in as Captain, a grandson of one of the former Captains and Presidents, Herman Menz. Mike had been imbued by Hay with the ambition to compete at the international level rather than the local, but with Athol Macdonald as Vice-Captain, a devoted secretary in Guy Hebblewhite (Mark's father), a keen treasurer in Dick Turnbull and an energetic Don Sarah as President, Mike proceeded to work on the rowing as well as the fund raising.

Adelaide's Senior 4 was the best in the State, and proved it at one of the first regattas held at the new West Lakes Rowing Course, but were beaten into second place for the Bullock Cup by a Victorian 4.

Another three rowed in the State Junior 8 at the same regatta - Nigel Winter, Alf Ranson and Clive Ansell, and South Australia won the Blundstone Cup for Australian coxed 4's with Athol Macdonald, Mark Hebblewhite and Grant Duncan, Bill Dankbaar from Torrens being the fourth. This crew then decided to try its luck at some of the European regattas, Grant Duncan having to withdraw, and Matthew Marquis filling his seat, and Mike Lohmeyer going along as Manager during the winter months of 1975 (summer in Northern Hemisphere). That trip was to be a saga on its own, the boys coming back with new horizons and tales of fabulous hospitality among rowing men. 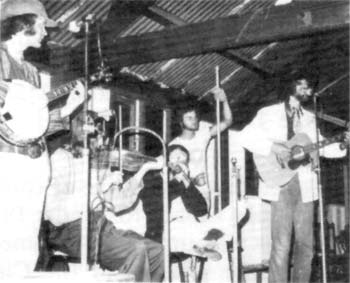 Adelaide Rowing Club sent several maiden and novice crews at Easter to the Mildura-Wentworth regattas to get valuable racing experience, but were hampered by a lack of coaching; Klaas Buys providing valuable help in this department against heavy odds.

The financial position was got under control, and $6,248 profit resulted from bar trading, social functions and sales of wine undertaken by the Vice-Presidents. The committee even raised money from hire of boats and boathouse facilities to the S.A. Women's Rowing Association, who moved in, and for whom a new type of membership was created, called social membership, and the former caretaker's quarters were converted into a changing room for them.

To raise money to buy a new racing pair, two heroic oarsmen, Mark Hebblewhite and Athol Macdonald, undertook to row for a 24 hour 'Rowathon', donations being sought at so much per kilometre covered from as wide a section of the community as possible. They got their new pair, plus a pair of blistered hands and sore bottoms when they climbed out of the boat at Murray Bridge.

More money was made from the sale of empty bottles, and more saved by Club members repairing and maintaining the Club's boats.

The Captain's Trophy was awarded to Nigel Winter, who was destined to become Captain himself in a short while. The J.J. Sharp Trophy went to Grant Duncan, the Charles Morgan to Paul Jeffries, who had excelled at coaching and organising, and Geoff Widger won the greatest number of races.

The members certainly appreciated the reunion barbecue in April, where old and present members and friends met to celebrate such an eventful season.

Captain Mike Lohmeyer and his argonauts were back from their successful European adventure, full of experiences and bearing a film to illustrate the telling of them, to whet the appetites of young rowers and sadden those too old to think of doing the same. One of the direct results of this trip was the move of Athol Macdonald to Sydney, where his chances of selection for the Olympic squad were much better, and this came to pass. Another rower selected was former South Australian Brian Richardson, then in Melbourne, but whose senior rowing career began at A.R.C. as a coxswain in the late 1950's, his name appearing in the glossary of winning crews in the 1958-59 and 1959-60 seasons.

Although Torrens Rowing Club won all three pennants this season, Adelaides won 26 races and were their hottest rival, with two men in the King's Cup - the two Duncan brothers and the spare man, Matthew Marquis, plus Tim Roden and Adrian Blue in the State Youth crew.

The Hay concept of Adelaide Rowing Club being a tributary feeding promising rowers into the ranks of (a) interstate, then (b) international competition gained credence quickly, but the crunch was shortly an­nounced by the S.A.R.A.: There would be a $100 levy on the Club for each member participating in interstate events, to help cover the moun­ting expenses of interstate competition on the greatly enlarged scale and number of events which automatically led to Australia's ability to nominate in Commonwealth Games or Olympics. These levies hit the Club hard in a season when support from social functions and other sales lagged as a natural reaction to last season's big "take".

It was not for want of trying - there was a dinner to honour Ken Milne's 90th birthday, when the dear old boy initiated a Trust Fund for the Club with $600. Then there was a New Year's Eve show, at which (quote) "250 partially-smashed heterosexuals engaged in all types of antics on the dance floor, around the bar and in various other places. The dress was blazers and plunging necklines; it was certainly a ‘mammarable' occasion". (unquote).

There was also another reunion barbecue, a film evening and an ‘Oarsman's Day'.

The Captain's Trophy went to Adrian Blue, the J.J. Sharp and the C.A.M. West to Nigel Winter, and the Milne to Tony Goldsworthy for the umpteenth time.

Mike Lohmeyer just had to give some attention to his young family this season, and Steve Crouch came in as Captain, Matthew Marquis as Vice-Captain, Guy Hebblewhite remained as secretary and Richard Turnbull as treasurer, so there was sufficient continuity to keep things running smoothly. So smoothly, in fact, that Adelaide Rowing Club was runner-up to A.U.B.C. for the Premiership, winning 16 races, mostly in Senior ranks, including Champion 8's.

That crew really was magnificent, and one of the major factors was Willie Hay in the stroke seat. Jack Hume coached them, and they seemed to hit the magic formula at the right time. It was a pity Mike Lohmeyer did not have a few more juniors and maidens to coach, because lack of depth in those categories let the Premiership slip narrowly away.

With such good Seniors, Adelaide had five men in the King's Cup squad, three rowing in the 8 and the two spare men, and two of these five, Henry Duncan and Matthew Marquis, were selected for the Australian squad.

The West Lakes course was improving towards its ultimate potential as a world class venue under the chairmanship of Bruce Robertson, and $50,000 had been spent on the building so far. The first Head of the River (schoolboys) was held there this season, and the course was officially named "A.M. Ramsay Rowing Course" by Mr. T. Casey, Minister for Tourism, Recreation and Sport.

On the Club front, things were buzzing like a beehive. Don Arnold had come in as the new President, and carried on in the image of his predecessor, Don Sarah, who actually presided at committee meetings instead of being a senior figurehead. More improvements were made to the clubhouse, and the debt to the Sarah brothers' account crept up again to $6,000. Help in pegging it back came from a new source - the new social members of the Women's Rowing Association. These lasses served behind the bar, did secretarial duties for the committee and tidied up the place, and 95 years after the Club was founded, the first names can be recorded of women members who stood out as people who contributed significantly to the Club life. Gloria Prior, Cathy Cooper, Joan Hughes, Lesley Cummins, Barb Phelan and Sue Egan gave much time and effort, and enjoyed their rowing too.

Underwater Explorers' Club joined in, sharing the Club facilities on a businesslike arrangement, and this was seen to be in the mutual interest of both. Rowers were invited to their picture evenings, and Explorers contributed at the bar, as did some other social members who called themselves Gazoliks, a "keep fit" band of men, some of whom had rowed previously.

So quite suddenly there was a mixed collection of Adelaide Rowing Club, Women's Rowing Association, Pulteney Grammar School, Goodwood Technical High School, Unley High School, Underwater Explorers and Gazoliks, using the boathouse at different times of the day and the boats on a sort of Box and Cox basis, carefree but debt-ridden.

This season's Rowathon was a disaster; two crews started off pacing each other from Walker's Flat to Murray Bridge, but the weather turned bad and it finished up as a "Swamp-a-thon", both crews emptying out several times, and only one crew made it to the finish.

Jack Richards was awarded the Captain's Trophy, as he made it to be selected in the reserve crew for the King's Cup squad in his first year of rowing. Mark Hebblewhite got the C.A.M. West, which he clinched by getting into sculling and winning a few races in that category as a bonus.

One of the hardest worked members of the Club was Geoff Harry, the honorary solicitor, who was asked to draw up a new Constitution in order to define the positions of all the new categories of members using the premises, and it turned into a headache for all those involved and had to be deferred until next season.