The new Captain, Russell Osman, was also of mature years and experience, assets proven to be of great advantage to the Committee.

Wins at regattas were not up to last season, but twelve wins, six in 8's, was creditable, considering the shortage of coxswains. Crews began their training in the winter months under a qualified athletics instructor, although many of last season's winning oarsmen left the active ranks.

David Bishop was again chosen to row in the King's Cup. His performance on the ergometer could not be matched here in South Australia, and his enthusiasm and strength in the boat were outstanding. 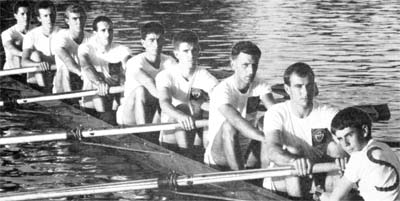 David Bishop in the four seat

Metropolitan Regatta continued to be the largest and most popular one held on the Torrens. This season there were 77 events contested by 550 oarsmen in 92 crews, and by now Adelaide Rowing Club was offering six perpetual cups or trophies for competition, named for famous A.R.C. oarsmen, Messrs. Alf Grayson, Dean James, Max Fotheringham, Charles Morgan and Dick Clark, plus the A.R.C. Memorial Cup. Metropolitan Regatta is traditionally held either one or two weeks before the schoolboy Head of the River regatta, for which it becomes a final try-out for school crews in need of racing experience, and a good indicator to stimulate speculation in rowing circles and the sporting Press as to the likely winners.

This season's winner of the Captain's trophy for the most improved first year oarsman was David Hislop, himself to be elected Captain several years hence. 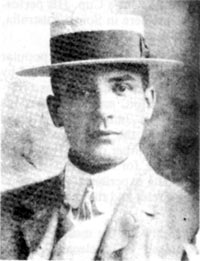 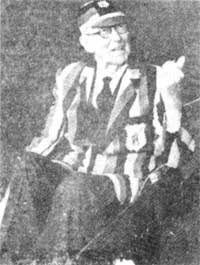 The Committee ordered a new regulation 4 for next season. This would fill the racks in the boatshed, there being already three 8's, four 4's, two pairs and two sculls, besides a speedboat, oars etc., so it was just as well that Pulteney Grammar School this season negotiated and built an annexe to Adelaide boathouse to house their increased fleet, increased prolifically since their going Head of the River two seasons ago. The deal involved the annexe reverting to Adelaide Rowing Club when Pulteney Grammar School built its own separate boathouse. Unfortunately, the annexe roof made unauthorised entry to the club rooms on the upper floor somewhat simpler than before.

Social and household events tended to overshadow the rowing this season, and this was helped greatly by the continued initiative of the Ladies' Committee in raising funds, providing afternoon teas and suppers, and generating attendance at functions. The Annual Ball at the Burnside Town Hall was attended by close on 400 people, the `Festival of Fun' was again held at the home of Mr. and Mrs. N.C. Binder, and the Christmas Cabaret was the first large evening party held in the boathouse since the premises were licensed in October 1962, and all were great successes.

Bar trading was restricted to the current six o'clock closing time, with a special permit to midnight each Thursday. These Thursday nights were utilised for such functions as special presentations, such as the one made to Geoff Harry in appreciation of his professional and temporal atten­dance at the Midland Licensing Court, or for stag parties for members getting married, or for farewells to members going overseas or interstate, like Len Grummet to Western Australia, or for picture evenings, raffle drawings or what-have-you.

When the Queen and the Duke of Edinburgh attended the Torrens Lake Festival, a special evening was held, when members could have a magnificent view of the proceedings from the windows of the bar room.

Charlie Amiel did a great deal to get the whole operation into top gear, and was the inaugural Treasurer, presenting the first season's trading results showing almost £500 profit and ample proof that the bar was a tame benefactor and not a threat to the character of the Club.

Ken Milne succeeded Len Grummet as President, and Russell Osman stayed on as Captain, and the Club spirit was as keen as ever, 14 races being won at S.A.R.A. regattas this season. The accent was on lightweight events, the main contenders being the two Ingham brothers, Geoff Hill, L. Cox and Paris Osborne, who had switched from coxing so successfully that he rowed in the Champion Lightweight 4 with Geoff Hill, Bob Ingham and L. Cox, and rowed with Cox and David Hislop in the State Lightweight crew, with Bob Ingham as spare man and R. MacLean as coach.

David Bishop was once again selected for the fourth successive time to row in the King's Cup, but hereafter would switch to University Boat Club, to the sorrow of A.R.C., and later to Melbourne, where he would row in some winning King's Cup crews: a fabulous rowing career.

David Hislop's rowing talent was again noted by his award of the J.J. Sharp Trophy, and the Milne again went to A. Goldsworthy, while Geoff Hill came home with the C.A.M. West Shield.

At the Metropolitan Regatta Mrs. Osman named the new regulation four after another Australian river, the `Glenelg', and the Committee sold the latest eight, I Zingari XI, only two seasons old, after the last regatta of the season, to Pulteney Grammar, who needed an eight urgently, having damaged theirs a week before Head of the River. A new best 8 was ordered forthwith for next season.

Social functions were all financial successes with the help of the Ladies' Committee, the Annual Ball in particular attracting a record attendance with its chicken and champagne supper. The dinner, held in the boathouse, was expertly catered for by the mother of the Treasurer, Gary Samson, and the evening held to raise funds for the State Lightweight 4 filled, and paid the bill handsomely.

At Opening Day, President Ken Milne stroked the Old Buffers' 8, a feat he would perform thereafter, including the season before he died at well over 90 years of age.

The success of the licensed premises continued under Colin Runge's guidance, with improvements made in the form of steel grilles over the windows, another bottle refrigerator, a better beer dispenser and new floor tiles in the Club colours donated by Myer Solomon. Another £500 was transferred to the Club's general account, and extra heaters ensured that members would be comfortable during winter evenings. Another winter project which enhanced the Club atmosphere was the painting of the outside of the boathouse.

Once again it was sad to note the passing of three members, well known for different skills. Rex Horton Wallman, while still President of the S.A.R.A. died, having held that office for a record span, also two very well known rowers, R.F. Richardson from the halcyon days of A.R.C. domination in the nineteen hundreds, and D.V.H. Jackson from the early twenties.

A mild recession began in Club fortunes, which saw the number of wins at regattas fall to twelve, three of which were in pairs with the same crew featuring.

The reason could be seen in the sudden lift in the number of social functions held during the rowing season, for instance, Fancy Dress Cabaret in November, Golf Match at the end of November, Christmas Dinner Dance in mid-December, Beach Party, Goolwa, at the end of February and Festival of Fun on 27th March. All were well attended and successful, as were the others (except one) held after regattas were over, like the Metropolitan Cabaret (the flop), the Head of the River Cabaret, the Annual Ball at the Town Hall and the Dinner. A hectic round, with rowing not taken so seriously.

The two new boats ordered arrived just after Christmas, and were named ‘I Zingari X11' and the racing pair ‘Parramatta' by Mrs. Ken Milne and Mrs. Russell Osman respectively. The new regulation 4 `Glenelg' was badly damaged in an accident, and became an insurance claim, but the time lost was a nuisance.

The oarsman considered to have improved the most was Richard Green, and P. Bonaguro, a consistent performer, was awarded the Charles Morgan Trophy for ability and general qualities.

The House Committee again transferred £500 from the bar trading to the general funds, and made further improvements to their facilities, and the Ladies' Committee, by now a power in the land, donated £40.

Herman Menz succeeded the late R.H. Wallman, thus keeping an Adelaide Rowing Club man as President of the S.A.R.A., although the other offices were becoming more evenly distributed by now. 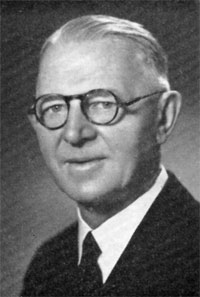 The highlights of the season were remembered at the Festival of Fun held at the residence of Jim Eglinton's parents and at the Ball at the Town Hall, when 350 guests danced, supped and tippled in grand style. The Eglinton residence, after 400 festive fun makers had left, resembled Jock McLean's farm after the Ball of Kirrimuir.

The A.G.M. saw a move away from the office of Captain being filled by a mature age member, Russell Osman having completed three years in that capacity, with Bob Ingham coming in with Bruce Pontifex as Vice-Captain, a new Secretary and many new names on the Committee. As had been proved in the past, this spelt a recession in Club morale and, in particular, a recession in regatta wins - from 12 down to 4. 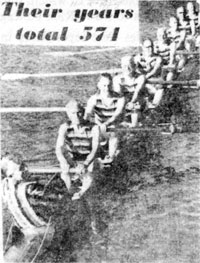 However, the social side thrived, with three cabarets being held as well as the usual Christmas morning function, a bumper Ball and the Annual Dinner. The secret of this success was a vigorous Ladies' Committee. The bar, which traded Mondays to Fridays from 5 p.m. to 6 p.m., on Thursdays with a special permit to 11 p.m., and opened at 3 p.m. on Saturdays for three hours, contributed nearly £1,000 to the general funds, so that a new ladies' toilet was built and the rowers' toilet re-modeled. Other funds raised by the Ladies' Committee purchased a loud hailer and paid for tiling to the toilets.

After a poor showing in the sphere of rowing, several members under­took winter training, some attending a health studio in town. Whether this had any bearing on the next season's success is hard to tell, but wins in regattas jumped from 4 to 15.

Rowing this season was helped considerably by the efforts of three coaches, two from outside South Australia, and one, Sam Rose, a home grown member. Geoff McIntyre from Sydney made a power of difference to the Maiden and Lightweight crews, and John Ellis to the Junior 4 and Maiden 8.

Every race success but one (Junior 4's) was in the novice, maiden and lightweight categories, and this gave hope for some real progress in the seasons ahead.

An exciting event in which Adelaide Rowing Club members were fully involved was the running of the King's Cup Regatta at Murray Bridge, the chief executive of which, once again, was R.D. Clark, who delegated many jobs to his A.R.C. colleagues.

Adelaides were represented in the State 8 by David Bishop at 6 and D.A. Pritchard as spare man, Bill Wallace as coach and John Ellis as assistant coach. The 8 came a very close third, and the lightweight 4 came second.

The social side, once again helped by a very active Ladies' Committee and a House Committee under Russell Osman, raised over $2,200, while social functions raised a further $1,100, so that the purchase of a new best eight and best 4 were put in hand for next season, with the anticipation of more wins in junior and senior events, preferably in 8's. Six of the 15 wins had been in pairs, and Vice-Captain Tas Binder was a rower in every one of these.