After such a disappointing season, the new Captain, Brian Bishop, could well have felt daunted by his task, but the pendulum had begun to swing up from the low point. With Ian Jamieson as Secretary, a new President in Len Grummet, and a purge of the Vice-Presidents down to a total of 4 (it had been up to 16 once!), the Club battled to a total of 9 wins, 6 of which were Novice 4's, under the able coaching of Jim Lord. Twenty three new members joined to swell the ranks of the Novices, but junior and senior ranks were still short.

The usual social round went on, but with a welcome addition - the first Ball since the war was held at the Burnside Town Hall, and it attracted a capacity crowd, and the coffers finished up once more in credit to the tune of £1-14-Od.

Metropolitan Regatta attracted even more entries this time, with 240 oarsmen competing, and starters and judges were flat out to keep the races rolling. By now a new trophy had been added to commemorate Max Fotheringham - The Max Fotheringham Shield for Senior Sculls, complete with a glass case donated by the Life Members.

The Club then learnt of the death of Sir James Gosse, that famous oar and benefactor, whose sporting life had been devoted to rowing and to fostering the sport within the Club he helped to shape.

With the influx of new rowing blood and a few early wins to boost confidence, and a keen new coach in Joe Boulton, the pendulum's upward swing gained momentum under Brian Bishop's second year as Captain. Out of eight wins, seven were in 8's, five of them Juniors; so the experience of the crews was maturing, and Joe Boulton was really firing them with the ambition to win the big stuff. That would come in the season after next.

One of the factors in the improvement was the new winner of the Milne Trophy for coxswains, Bruce Laughton, who coxed the first 8 entered in Champion 8's since the war. Although they did not win this time, they had been "blooded".

Another trophy was added to those already for competition at Metropolitan Regatta - the Charles Morgan Memorial Cup for Junior 8's. At this regatta the Max Fotheringham Sculls was won by Bob Bradley of Railways Rowing Club, and he is still winning sculling races nearly 30 years later.

Ian Jamieson succeeded to the Captaincy, with Bill Harvey as his Vice, and brother Jim as their secretary, and things began to happen, starting at the Berri-Renmark regattas, then at Murray Bridge and Mannum, with some really good oarsmen showing through. So much so, that six A:R.C: men were chosen for the King's Cup this season, rowed at Port Adelaide - four rowers, the coxswain and the assistant coxswain.

The Committee inaugurated the Christmas Cabaret, and many members were involved in running the King's Cup, and they still found time to rebuild the eight they bought when Mercantile Club was dissolved, and to run picture evenings every month. A new eight was delivered at the end of the season, and a new Best and Best four was ordered.

Things were really getting into top gear, and three of the winners of Club trophies typified the keen young members - Doug Wiles, Murray Rossiter and G.L. Radford, yet the Club still managed to finish the season with a healthy credit balance.

The President's wife, Mrs. Len Grummet, named the new eight "I Zingari VIII" on Opening Day, and three months later Mrs. Dick Clark named the new four "Tamar IV", and during the following winter the Club took delivery of another racing eight and another Best and Best four.

Members sensed that they could win a Premiership, and were prepared to do everything possible to win it.

In fact, Adelaide Rowing Club won the Junior Pennant this season and was runner-up in the Senior, having won the Ladies' Challenge Shield again, Champion Junior 4's, Champion Junior 8's and Champion Sculls, plus 23 other races at S.A.R.A. regattas.

They repainted the boathouse and had the roof renovated by the simple expedient of putting "slips" between the laps of the iron, and painting the roof, which is there today, having worried successive Committees from the forties onwards.

The Harvey family, having infested the Adelaide Rowing Club in earlier days with Arthur, Arthur Junior, K. (Boer War) Arnold, E.C., A.B. and W.R., had broken out again in the form of Duncan, brother to Jim (Secretary) and Bill (Vice-Captain last season), being awarded the J.J. Sharp Trophy for the most improved oarsman, so it looked as if they were becoming endemic, as Duncan also shared the C.A.M. West Shield with E.M. Hutchison.

At Metropolitan Regatta, besides dispatching 272 oarsmen in a quickfire succession of races, Adelaide Rowing Club oarsmen won Max Fotheringham Senior Sculls and A.R.C. Memorial Cup for Maiden 8's, while the A.U.B.C. won the three remaining `pots' - the Dean James for Senior 4's, the Grayson Cup for Senior 8's, and the Charles Morgan for Junior 8's.

At the King's Cup regatta at Ballarat, A.R.C. had seven men representing South Australia. Jim Lord was Sole Selector, Jock Gosse was Coach, Ian Jamieson, A. St.J. Allen, Doug Wiles and Tony Matthews rowed in the 8, and P. Machin rowed in the President's Cup for Sculls. After that magnificent effort, the books showed a deficit of £1.6.6s. The Wizard of the Books was R.F.H. Jarvis. 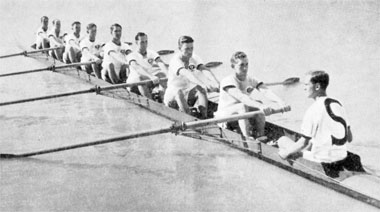 This was to be the vintage year for Adelaide Rowing Club. Having come so close last season, and with a clutch of seasoned rowers rarin' to go, Joe Boulton's boys really "pulled out the stops" under Captain David Wurm, and won the State Premiership for the first time since 1938-39. 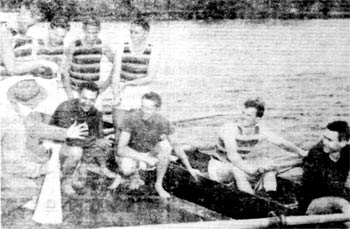 Club crews were entered and raced at Henley-on-Yarra in March and at Mildura in April 1957. They won Champion Senior 8's, Champion Junior 4's and the Arnold Cup, informally known as Champion Maiden 4's.

The Club had three in the King's Cup crew, plus the coxswain, the spare man and the Coach. These were Ian Jamieson, Doug Wiles, David Wurm, Bill Hardy, Alistair Allen and Brick Pennington respectively.

The new eight, I Zingari IX and the new four, Hunter I, were named at Opening Day by Mesdames Menz and Forwood, and "good fortune attended all who rowed in them", as the good ladies' wishes came true.

The winners of the Club awards were both outstanding competitors - John Brook won the J.J. Sharp and the C.A.M. West Shield, and Paris Osborne won the Ken Milne Trophy for coxswains, both having had a very energetic year.

The social side was not neglected, with a Christmas cocktail party in the boathouse, a Dinner and a very celebratory Ball after the end of the rowing, when people kept tripping over eskys in the Burnside Town Hall. Another special function was held in the home of former Captain and famous King's Cup oarsman, John Williams, in order to raise funds for the King's Cup crew to go to Brisbane. It took the form of a "Fun and Games" evening. Some of the games involved an element of luck, and some small fortunes passed across the table before the evening (and the table, incidentally), came to an end.

The Club itself continued to raise funds among its thirsty members, by selling tickets which entitled them to claim a bottle of beer from the Captain or Committeeman who happened to be "host" after rowing. No money passed while the host was entertaining his friends, and the margin on the tickets was adequate to warrant a goodly stack of bottles in the locked cellarette, and the Police raised no objections, as long as there were no complaints from neighbours.

But no amount of "drinking the Club out of debt" could defray the ex­penses of this vintage year, and Treasurer Stirling showed a deficit of £173-13-9d. for the season. But everyone reckoned it was worth it.