If the previous season saw a marked change in the make-up of the Committee, away from long-serving members, this season's Committee was even more inexperienced, only 3 members being versed in the ways and customs of the Club, Messrs. Morphett, Williams and Turner. 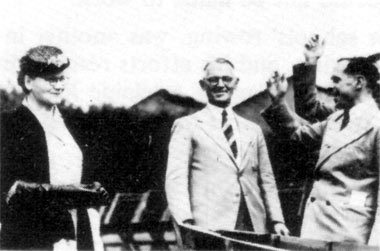 Charles Morgan had stepped down as President, and was made Vice Patron, and Herman Menz was elected to President, and the post-war recovery in the "quality of Life" was still painfully slow.

So the Committee, with Bob Richardson as Captain and Jim Muirhead as Vice Captain decided to enter as many regattas as possible in 8's thus giving the predominantly young membership a chance to participate with the few Coxswains and coaches available.

Three dances were held, plus the usual functions of Opening Day and Christmas Morning, and a dinner in conjunction with the Annual General Meeting at the end of the Season.

This was an innovation, but the major innovation was actually introduced by a member of long standing, Hurtle Morphett.

As a member of the Committee, he was aware of the problems of that body, faced as it was, at the beginning of the active part of the rowing season, with a multitude of problems and decisions just when crews had to be evaluated, sorted out, trained and boated in equipment sometimes not in top condition.

A programme of fixtures had to be drawn up, showing social functions, club regattas as well as S.A.R.A. regattas to be of any use, and nobody was ready to be specific. It was a hell of a rush.

So he suggested, and a Special General Meeting was called to consider - that the Annual General Meeting should be brought forward from Mid-September to the end of June, so that the newly elected officers would have a longer period to perform all those tasks with more care and less strife. And so it was agreed, unanimously.

Another innovation was the filming of the Club crews in training, to pin-point faults for the coach to be able to show to the oarsman concerned, as Toff Qurban had done with the 1937-40 King's Cup Crews. But with the delay in getting film processed after the war and the speed with which Club crews changed, the idea could not be made to work.

Dick Clark, the Club's delegate for schools' rowing, was another innovator in getting State Schools into rowing, and his efforts resulted in crews from Goodwood Technical High School using Adelaide Rowing Club's tubs this season as a prelude to competitive rowing during the forthcoming seasons.

The Club's caretaker, Borg, resigned and went interstate, and would be sorely missed, but these were the days of full employment.

On the rowing side the Club's 8's won four races, two in Maidens, one in Juniors and one Senior 8, plus a Junior 4, and had a lot of great rowing potential coming along the pipeline.

Rex Wallman rowed in the King's Cup crew, and Don Arnold won the J.J. Sharp Trophy for the most improved oarsman.

Wilf Alexander Memorial 4's were rowed for the first time this season and another famous member who had died was commemorated at the Annual General Meeting by all members observing a minute's silence, Charles Morgan, just about the last link with the earliest days, and a great rower in his day. Fourteen members attended the funeral, and the Club sent a wreath. He was 81.

The advantage of moving the Annual General Meeting and election of new officers was amply justified by the outstanding performance of the Management of the Club during the season.

Under Captain John Menz, ably supported by Don Arnold, as Chairman of the House Committee, a new departure that really paid dividends and generated enthusiasm, the participation of a greater number of members both in rowing, and social activities, was very noticeable, and for the first time in a decade, the finances showed a healthy credit balance.

Boat building continued to suffer from shortages, so new boats on order were not delivered, and existing boats had to have their lives extended with "tingles" and stiffening members.

At last, there was as a squad of several older members who had volunteered to act as coaches and the Club's performances at regattas improved, by winning five 8's and four 4's, including the Ladies' Challenge Shield for Senior 4's on the Torrens.

The most encouraging feature was the competition among the large pool of junior oarsmen for seats in the two 8's that were continually in training.

Some very promising oarsmen joined the Club, including Brian Bishop, Tony Abbott, Bill Humble and Ian Jamieson. The last named kept members amused at several of the social functions with his playing of the bagpipes.

If the rowing successes were not spectacular, the social functions were well organized and never failed to return a good profit, as the members really got involved and the enthusiasm caught on.

Two dances were held in the Boathouse, both attracting over 200 people. Two dinners, the second one immediately preceding the Annual General Meeting, were popular, and all the Club regattas got good entries and spirited competition.

8's were entered as well as 4's at Berri, Renmark, Murray Bridge and Mannum with some success. A 4 entered for the Mildura regatta, and came second in the Open 4's to Mercantile Club, Melbourne.

All the Port Adelaide regattas were contested, but with limited success and the Club members were heavily involved in the King's Cup, held at Murray Bridge in May, 1949.

Two Adelaide men rowed in the South Australian crew, Rex Wallman at bow, and Tony Abbott at 4. The starter, an umpire and one of the judges were A.R.C. men, and many members actively participated in the various committees handling the organization and facilities on the race days.

If one word could describe how this season stood out, it would be "organization".

Everything was thought out, discussed, and laid on in plenty of time. There were coaches available, good coxswains like M. Silk, Roly Kaibel, Bruce Laughton and R. Bartlett, who did their job efficiently; the boats and boathouse were kept up to scratch, and everything worked.

The House Committee even wrote screeds "for the guidance of future committees" as to catering and budgeting and selling tickets and so on.

The post-war apathy had really been shaken off. 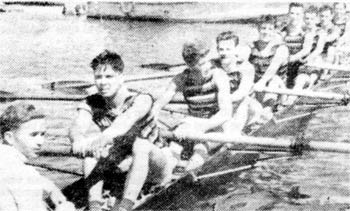 By now the Club had really settled down after the upsets of the War, and, although the number of races won at S.A.R.A. regattas was only eight, they included Champion Maiden 8's and four other races in 8's and a Senior 4.

The membership was now growing steadily and so was the Club spirit and, partly due to the chronic shortages of materials and services available for sale, the current account was in credit to the extent of nearly £9, the three dances and the Annual Dinner having been great successes. At the latter function, Joe Vardon, in the role of Admiral Von Tromp, led the chorus with "a whip at the mast".

Lyn Davis took on coaching the Maiden and Junior 8's, who began showing some real progress. The winner of the C.A.M. West Shield for the member with the most wins was Rex Wallman, soon to withdraw from contention in pursuance of his dental studies, having been prominent as a competitor since 1947.

This was the year of the polio scare, and the effect of this was to in­hibit the efforts of the Club which had, on the initiative of one of its Vice-Presidents, Dick Clark, taken on the sponsorship of Goodwood Technical School into the noble sport of rowing. All schoolchildren were advised to forgo strenuous sport, and there were no entries from schools for events at the Metropolitan Regatta, and Goodwood Tech. had to wait until the next season to begin rowing.

The World War II Honour Roll was finalised and framed. This was the good news reported by Bill Gearing, Chairman of the Boathouse Committee; the bad news was that less than twenty years since the boathouse had been built, termites were active in the tower section. This was to cause major demolition and rebuilding about twenty years later.

In contrast to last season's Metropolitan Regatta, still being wholly organised by Adelaide Rowing Club, 219 oarsmen entered, including a bumper entry from the schools; the Grayson Cup for Senior 8's was won by a schoolboy crew, St. Peter's College, now free from polio, beating University in the final.

A further sign of the times was seen when the Club closed its books with the record sum of £108-12-8d. in credit, a sum assembled with the help of only one dance, one Annual Dinner and a Ladies' Committee.

The "pot hunter" this year was another able contender for the C.A.M. West Shield, John Hill, who was to be prominent in rowing for many years.

At the Christmas morning function, the Patron, Max Fotheringham, unveiled the W.W.II Honour Roll. Little did members suspect that before the season ended, dear old Max, champion oarsman, President for 8 years and Patron for 11 years, would be dead; a sad loss to all who knew him.

Many of the more experienced oarsmen drifted away, and Lyn Davis gave up coaching early in the season. These two facts had a strong effect on the disastrous race results - two wins for the whole season.

Jim Lord, back in Adelaide, undertook coaching the novices, and two brothers, Sam and Peter Humble, stood out from their fellows. Peter "was awarded the Milne Trophy for coxswains, and in a couple of years was stroking winning crews.

There was little to show after the season finished, except that some improvements were put in hand by energetic boathouse committeemen, Matt Tiddy and David Perry, who turned last season's credit into an overdraft.