This season followed the pattern set by the foregoing season for a Holding Brief during hostilities.

A few events were recorded as follows:

Mrs. Fotheringham was congratulated on being awarded the O.B.E.
The boathouse was painted at a cost of £25 and the overdraft climbed to £166.

The same pattern was followed this season, the Annual General Meeting being attended by 23 members, where congratulations were recorded to W.K. Bolitho on being awarded the D.F.C. while members toasted the health of members serving in the forces, four more of whom had been killed - Dean James, C.L. Schrader, T.B. Hamilton and R.T. Hand.

All members of the Committee were now of mature age, Joe Vardon and Bill Menz coming in to replace J.M. Nicholls and A.M.D. James. 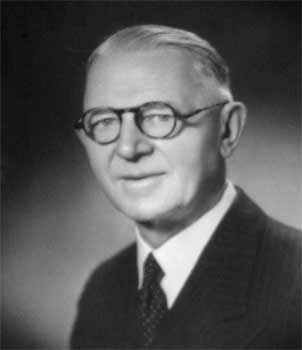 The overdraft was somewhat reduced by selling the clinker practice 4 to Railways R.C. for £58.

A letter was sent to the Quintin Boat Club, Stan Facy's old Club, com­miserating on their being bombed out, after having survived the Blitz.

Things were going better in all theatres of War, and at the A.G.M. Len Grummet proposed that some regattas be held on Saturday afternoons, and this was carried unanimously.

But the only record we have is that the S.A.R.A. was told by Adelaide Rowing Club that it would support any regattas run by the Association but was not in a position to run one itself.

Quite a good intake of junior active and non active members took place, and towards the end, a few more older members rejoined, including Jim Lord, while George McEwin, another Vice President, and J.T.E. Barclay died.

At the annual General Meeting, which signalled the last of the wartime seasons, and took place soon after hostilities ceased, there were 34 members present with Charles Morgan in the chair.

Bart Hopkins expressed the thanks of the ex-service men to the Captain and Committee for the way they had managed the Club during the War years, and this motion was carried with acclamation.

They re-elected Dick Clark as Captain, made Bob Alexander Vice Captain and put back Keith Forwood and Dave Nightingale on the Committee, with Ron Turner and H.V. Fairweather as new committeemen.

At a special General Meeting after the A.G.M. the meeting altered the Rule pertaining to the years that active members needed to qualify for Life Membership, by allowing members of the Defence Forces, who were excused subscriptions during their years of military service, to count those years in their qualifying period, namely 10 years.

The Committee was taking its role seriously by trying to get the Club back to full peace time operation as soon as possible.

The Difficult Road To Normalcy

They were probably being a little too optimistic in expecting young men just out of school to come together with old soldiers and start training and competing in a period when people's actions and aspirations were hedged and frustrated by shortages and regulations and restrictions.

Everybody had his pet suggestion what "they" ought to do.

The returned service men were trying to get decent jobs, or attending rehabilitation courses at University or Technical Institutes. Petrol was strictly rationed. Building materials were restricted. It was anything but a Bright New World.

Walter Wadey had brought up the matter of hot showers at the Annual General Meeting, and this time the Committee felt its reputation was at state, and had them installed.

The boats generally were in pretty good order, but the oars, having lain in racks year after year, had become brittle, and kept breaking. More were ordered, and when George Towns was asked to quote for a reasonable racing eight, his £200 price for a plywood boat seemed pretty steep.

Spruce girder oars were £3-3-0 a piece, but we had to have them, so they were ordered.

Training was commenced on Tuesdays and Thursdays, and two crews were entered in the S.A.R.A. Opening Regatta, the 8 being entered for both Senior and Maiden 8's.

They were both beaten, but at the next regatta, Adelaides won Junior 4's, and the same crew went up to the Berri and Renmark regattas and won Junior 4's at each one.

Soon after, the Secretary, the Treasurer and two Committee members resigned for different reasons, and Dick Clark must have felt he was being left in the lurch. But the men elected to fill the vacancies Dave Nightingale as secretary, Ron Turner as treasurer and four replacements on the Committee, Ray Dunn, Russell Osman, Elliot Jarman and Bob Richardson settled to the task, the latter having joined the Club not seven months previously.

The Metropolitan regatta, run by Adelaide Rowing Club once again, was a great success, schoolboy crews beating many of the Club crews, but Adelaides won a Junior 4 again.

The post-war period saw a steady rise in prices of goods and services, and it was necessary to call a Special General Meeting of members to ap­prove a rise in subscriptions and to invite suggestions for means of attracting back former members and getting new members to join.

The 42 members present voted for the increased subscriptions quite willingly, and suggestions for winter rowing, more coaches, better publicity and personal approach to new members were made.

A rise in the Life Members list resulted, but there was no noticeable surge of new members.
The simple fact was that a lot of people were busy reorganizing their lives.

Dick Clark had been captain for 6 years, having been the major force in keeping the Club together during the War years, and having shown how it could kick on again during the season to follow, now decided to relinquish the captaincy.

At the Annual General Meeting, the members elected him to Honorary Life Membership with acclamation, and elected Ron Turner, who had served many years as the Club's first string coxswain as the new Captain.

While he was coxing he was known as Tiny Tim, but then he rowed for a season before going into, the Air Force, and came back into the Club as a well developed oarsman.

The new Committee was changed radically, with new Secretary and Treasurer, and with Bob Richardson as Vice Captain, but enough older members remained to give it stability. Jack Hardy and John Motteram got a well earned spell from their jobs, as Secretary and Treasurer respectively, the one held for 6 years and the other for 8.

In the new season, new members flooded in, the total reaching 29 by the following A.G.M., among them some very useful material in names like Bluntish, another Muirhead, another Wallman, Moncrieff, Ken Morris and Ian Cochrane.

The Club won 3 Junior 4's races, a Maiden 8's and a Maiden 4's during the season, which was the first since the War in which all the former social functions and club events were listed, except the Swimming Races, and crews were entered in most of the S.A.R.A. Regattas.

Owing to shortage of boat building timber, and a flood of orders, the boats, a racing 8 and a tub 4 ordered at the beginning of the season, were not delivered, and trophies could not be presented through a shortage of plating metal and pewter.

Swivels were steadily replacing poppets; a new Club permanent cup to commemorate Wilf Alexander was donated for competition in 4's; J.H. Gosse was knighted and a new trophy for Maiden 8's in Metropolitan Regatta, the Adelaide Rowing Club Memorial Cup, was introduced to commemorate those members killed in action during World War II.