One of the inescapable things about the beginning of every new season of every rowing club is the long lapse of the time between the last heady success at a regatta in April to the first tentative return to the water in September.

Some of the key members of last season's crews, for any number of reasons, are no longer available, and you have to pick up the threads and build up new combinations and try out young hopefuls and the Committee usually finds a whole new list of problems to solve and functions to organize. Many of the members are unable to get down to the Club at this time of the year because of examinations, and there is always a spate of resignations by members who have decided to make the break over the winter recess and do not want to incur another season's subscription.

An annual General Meeting is often the match that kindles the fire once again, and Max Fotheringham took time to speak to the members this September about the old spirit of the Adelaide Rowing Club, which he had seen come to light last season, based on enthusiasm, coaching, and efforts to keep really fit.

But the fuel did not seem to ignite like it had then, and with O'Connor out of that unbeatable maiden 4, which had to compete in junior 4's this season, the wins seemed a lot harder to get.

Then in a few weeks, for business reasons, Nightingale resigned.

To counteract these and other losses, a famous oarsman joined the Club, a former stroke of the Cambridge boat of 1932, when they beat Oxford for the forty-third time, Lew Luxton. At Port Adelaide, in the second S.A.R.A. regatta of the season, he stroked a Senior 8 to victory. This was a great morale booster, but it was not to last. Lew was heavily committed to the Shell Company in a senior executive capacity, and that was the same story with a lot of Adelaide Rowing Club men as they came up to senior ranks. 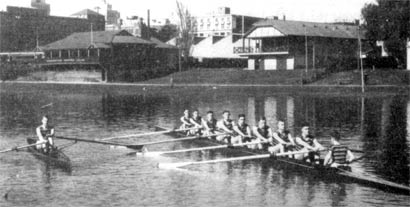 The Evolution of a Champions Eight, 1938

Jack Cuming was the same; he rowed 6 and John Williams rowed 7 and Wilf Alexander rowed 4, Geoff Sheppard 5 in that crew behind Lew Luxton. What a crew that would have been to go through a whole season with! But it was but a flash in the pan.

This was a magnificent effort, especially as five of the crew were actually junior oarsmen, and the 3 men in the bow weighed an average of under 10 stone (63.5 kg). John Sheppard was the coach.

This was the first time since 1906 that Adelaides had won champion 8's.

Soon afterwards John Williams stood down from senior competition and Geoff Sheppard, together with two from the Champion 8, Roennfeldt and Dunn, were chosen to row in the King's Cup crew, and they were not thereafter available to compete for the Club.

Adelaides won only eleven races during the season and dropped from 2nd to 3rd in the State Premiership.

Meanwhile, Back At The Boathouse

The boathouse Committee nearly had a fit when they found a bad leak in the 6-year-old roof where the tower abutted the main roof, and the sodden ground at the base of the tower, by the tool locker, was harbouring a very active colony of termites.

They hastily got a builder in to fix the flashing to the box gutter, and to repair the framework after the pests had been exterminated. 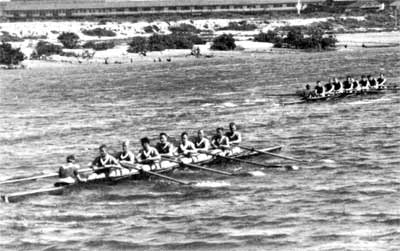 The idea of storing boats in an area kept damp by watering an earth floor covered with tan bark was all very well, but with timber framed walls the whole structure could be in jeopardy if termites really got a hold.

Since Alf Grayson's death, the premiums of the Queensland Insurance Company, who had paid up so handsomely after the fire, had got so much higher than those of their rivals, that the Committee decided to take the Club's custom elsewhere. They also acceded to the motion carried at the annual general meeting on the proposal of Wilf Stephenson that instantaneous heaters be installed so that members could enjoy hot showers.

Furthermore, that contentious issue, "swivel rowlocks are better than poppets," seemed to have gained momentum enough for the Committee to have the racing 8 and two racing 4's converted, along with two sets of blades.

The swimming races were held again, and Lew Luxton almost "scooped the pool" by winning the Club championship, the Lap Dash and the Neat Dive.

Boxing was resurrected under the auspices of Frank Nicholls, who was a State Middleweight Champion, and a lively exhibition was held, and earned some funds for the coffers, which had suffered a loss at the Metropolitan regatta through the decision of the four schools not to enter this year, mainly because the Head of the River was not rowed until May 28th, and in previous years, Metropolitan regatta had been a perfect lead up to the schoolboys' major event, which was held usually two weeks after Metropolitan.

Throughout the season the Club suffered from an acute shortage of coxswains. Their No. 1 cox was Ron Turner, but he was still at school and so often was busy coxing the Prince Alfred College 8.

Finally, towards the end of the season, a handy young fellow was found. His name? ... D. Cocks.

Whilst all this was going on, a sad event occurred late in 1937. One of the Club's most famous rowers, and Vice President since 1916, Fred Porter, died.

He was one of the 1906 crew that was the second-to-last one to win Champion 8's.

This was the season that was to see Adelaide Rowing Club take the State Premiership, under the Captaincy of John Williams and with Max Fotheringham as President.

All the ingredients were there: Plenty of rowing talent, both in Senior and Junior ranks, a captain who was a good leader, and in his second season in that capacity; an experienced committee, and some good coaches.

How To Win A Premiership By Scatter Shot

Max Fotheringham had been President since 1931, the year of the Fire and the New Boathouse, and for the last two seasons the Club had gone close to winning the Premiership, and at the Annual General Meeting he dwelt on the heartening success last season, when Adelaides won Champion 8's by sheer guts and a young crew, and the same spirit would do it again and win a Premiership in the coming season.

So, right from the first regattas, Adelaides entered as many crews as they possibly could, and built up points. But they did not seem to be building up crews that had that special will to win at all costs. Port Pirie ran away with Champion 4's and Champion 8's and Torrens with Champion Junior 8's.

But Adelaide crews kept plugging away at Murray Bridge and Mannum regattas. They won Open Sculls at Henley-on-Torrens and Open Pairs and Tub Sculls at Metropolitan regattas, and lo! the Premiership was theirs. A victory by having a go at everything.

Quite noticeable this season was the fact that a lot of the members were prepared to "have a go".

The Club functions were well supported, except for the "Assault-at-Arms" demonstration, but with Frank Nicholls absent, it lost much of its attraction, and incidentally, when he resigned in January, it was quite a blow to the rowing side, too.

Opening Day, Christmas Morning, the Dance and the Dinner, were all successes - and so were the Club regattas.

Three members' names kept popping up in the winning crews, Hugh Gillies, Russell Osman and Elliott Jarman, and when all races, both club and open were counted up, Osman and Jarman tied for the C.A.M. West Shield with 8 wins each.

The two main coxswains this season must have chalked up a prodigious mileage between them - Ron Turner and Peter Paterson, and young Neville Sprod had his share, too.

The King's Cup crew claimed four of the Club's best rowers and the senior coxswain, to make matters more difficult in winning points in those regattas after February. These were John Williams, Ray Dunn, Keith Roennfeldt, the spare man, Alan Buttrose, and Ron Turner, the cox. 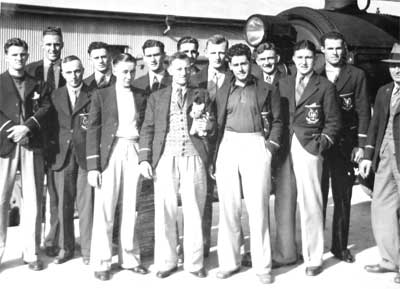 But there was War in Europe. Men were already joining up and attending camps while the "Cold War" contestants were sparring. It was just as well Adelaide Rowing Club won its Premiership when it did. On the performance after World War I, the next premiership would not come for about nine years after the cease-fire.