A new Captain, Vice Captain and Treasurer took the helm, with a daunting task of instilling some enthusiasm into the Club.

No crew was entered for Champion 4's and the Junior 8 was not successful in that Regatta. No crews entered for Berri or Renmark regattas, but five crews were entered in Murray Bridge and Mannum regattas. None of those won either.

The Champion Junior 8 entry failed, but a fixed tub 4 had a win.

On March 6th, at 11 p.m. the boathouse and fleet were completely destroyed by a fire, the only records surviving being the Committee minute books, some annual reports, and portion of the old scrap books.

The Club had survived the disastrous flood of 1889, and were determined to survive this fire.

A Special Meeting was held on (of all days) Friday the 13th of March at which A. J. Grayson advised the Committee what to do to substantiate their total claim on the Queensland Insurance Company (for which he was an agent).

Ken Milne had agreed to produce plans and estimates for a new boathouse. The Captain, John Sheppard, stressed the need for everyone to pull together and to keep members' interest during the period of reconstruction. The following clubs offered assistance in the form of lending boats, oars and changing facilities - Scotch College, St. Peter's College, Mercantile Rowing Club, Torrens Rowing Club, Port Adelaide Rowing Club and University.

The Secretary was instructed to apply to the Railways Commissioner (a Vice President of the Club) for abatement of rental charges, also for water rates, telephone rental and a waiver from the Adelaide Electric Supply Co. from a re-connection fee.

A committee of ten was appointed to settle details of rebuilding and another committee to advise on the purchase of boats and oars.

An anonymous donor offered a new flag. Letters of sympathy poured in (Secretary to acknowledge) from kindred clubs, (including the Polo Club and the Norwood Football Club) the Lord Mayor, the Curator of the Zoo, and the Commissioner of Railways.

Members were asked to donate photographs to try to replace the large number, so carefully collected over 49 years, that had perished.

Jack Hardy volunteered to salvage as much as possible from the scrap books that were blackened, scorched and water-damaged, helped by an excellent scrap book going back to 1897 donated by David Blyth.

As was to be expected, there were differing opinions, as to the detail of the new structure. Ken Milne's sketch plan showed a timber frame clad with galvanized iron simulating weatherboard, a tower over the entrance for judges to view races, a room for the Committee to meet in and another office for the Secretary, showers and toilet at the upper level.

The question of swivels or poppets reared its ugly head.

Tenders received from 17 builders (the Depression was already being felt by the building industry) ranged from £2,800 down to £1,900, none within the Club's finances, so the architect was instructed to call fresh tenders for a more humble structure, with features to save money.

The Committee handling the purchase of boats sought views on swivels versus poppets, and it transpired that the coaches found it more difficult to coach crews using swivels, and as the Club's performance over the last two years using swivels had been so deplorable, the Committee rescinded the decision to order swivels rowlocks and oars and the whole fleet was ordered fitted with fixed tholes, or poppets.

Looking back, it seems scarcely credible. The argument would continue to divide the Club, and some new members would join other clubs because they used the more "modern" swivel rowlocks.

A New Boathouse And Fleet

The architect's final submission was ready to be put to an extraordinary general meeting of 35 members for a boathouse costing £1,441 on the same site, and based on the one destroyed, with better toilet facilities, a hardwood floor and iron cladding.

W.H. Stephenson suggested cement rendering on expanded metal as a cooler, more attractive alternative, and the meeting agreed and it was moved and carried.

Jack Giles and Arthur Horrocks offered their labour free in wiring the new boathouse, and Ken Milne donated £30 off his architect's fee.

A vote on the swivels versus poppets realised 10 to 8 in favour of poppets, the rest being non committal. 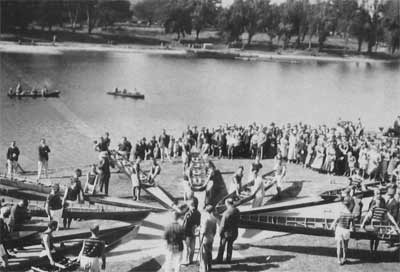 October 1931, View from the balcony of the new boathouse of the Opening ceremony. 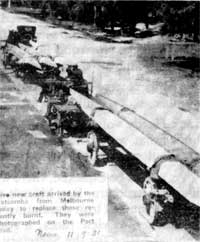 The Governor H E Sir Alexander Hore-Ruthven naming the new fleet at the Opening ceremony of the new Clubhouse, October 1931

Members at the Opening ceremony of the new Boathouse, October 1931.

To meet the difference between the cost of the new building and fleet and the insurance settlement, which, incidentally, was about £90 better than was first anticipated, plus donations, a committee was formed to raise funds by arranging entertainment and other functions.

This only brought forth an auction and a few "competitions", and even the annual Ball and Dinner were cancelled. The suggestion for a "Palais night" was not pursued, probably because money had become so tight.

With the help of borrowed boats and sharing in Mercantile Club's Closing regatta, five club regattas were held with the intention of holding the members' interest over this difficult period, for which, after all, they had paid their subscriptions.

Two crews in borrowed boats were entered in the Autumn Regatta, but without success. Attending regattas run by Port Pirie Rowing Club, and Wallaroo, the latest addition to South Australian Rowing Association, was out of the question.

After presenting the seven trophies which he had offered for club rowing, and made a generous donation, J.H. Gosse announced his wish to relinquish the office of President, which he had held for seven years running.

It was as if a new era had begun, with a brand new boathouse and fleet which would be ready to be opened by the Governor on Opening Day, and a new President, Max Fotheringham.

It was an unqualified success, October 17th, 1931, not 7 1/2 months since the disastrous fire, and here were close to a thousand people to witness the opening of the new boathouse and the manning of the new fleet after each boat was named by the Governor.

The Governor, His Excellency Sir Alexander Hore-Ruthven, declared the 50th season of the Club open, and after the boats were named, they were manned, and went past the boathouse in procession, preceded by the Veterans' crew consisting of G. McEwin, F. Acraman, S. Faulkner, F.K. Milne, C.R. Cudmore, F.W. Porter, J.H. Gosse, stroked by A.J. Grayson and coxed by H.E. the Governor, himself.

A smoke social was held in the clubhouse that evening with musical accompaniment and feelings of something worthwhile done, yet something else - to win races - still to be done.

A new World War I Honour Roll had to be produced from records still to hand. Jack Hardy was working through the old scrap-books, salvaging as much of the scorched material as possible, and cleaning it with dampened bread, made into balls of dough, which he used to lift off the smoke-blackened surface to expose the print beneath.

The Club won Dash 8's at the first regatta on the Torrens, then nothing until March, at Port Adelaide, when a tub slides 4 won a race.

The standard of rowing was still not up to entering crews in the three Championship races, although junior and maiden crews continued to compete in all regattas save Berri and Renmark.

But at the regatta the Club nearly always did well, the Autumn, on the Torrens, three crews won, showing that the standard of rowing was at last creeping up to its former level of five years ago.

The boathouse committee were kept busy re-furbishing the clubhouse with blinds, chairs, matting, pictures and all the domestic touches that made it something more than just a changing room for rowers.

The floor of the club quarters upstairs had been changed to some form of pine, and difficult to keep clean and not suitable to take polish, a result of the hard times through which everyone was going, including the S.A. Rowing Association trying to raise money for the King's Cup crew's expenses.

A lot of people were out of work, and the list of defaulters was longer than usual. Everything was being done on a reduced scale. Tickets for the Annual Dinner at the Victoria Hotel cost members 4/-.

The Great Depression had really set in.