For some time, proponents of the use of swivel rowlocks had been trying to get the Club to convert from the poppets they had been using since 1882, and which were still being used by Oxford and Cambridge University Boat Clubs.

After much discussion both at the A.G.M. and in Committee, that elected body decided to stay with poppets. 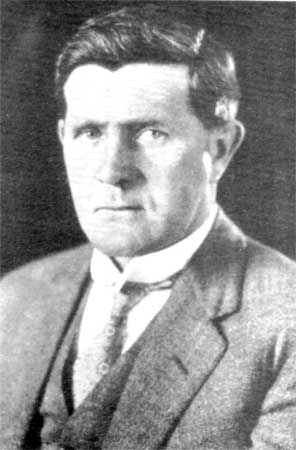 Four members got married, and were presented with gifts - T.R. Webb, Jack Dermott, Con Wilksch and Jim Lord. That would be the end of THEIR rowing careers. But there was always someone to take the place of those who faded away from the competitive ranks. W.W. Alexander, S.W. Matthews, and G. Harry were all to show out from their fellows.

Encouraged by wins on the Torrens, the Committee decided to go ahead and hire a "motor boat at a cost not exceeding £1-1-0 per day" for coaching Champion 8's and Champion Junior 8's at Port Adelaide.

But a strange lethargy had settled on the members. No races were won at Berri or Renmark. Mercantile Club won Champion 4's. Not enough rowers of any talent were available for Champion Junior 8's or Champion 8's, so the "motor boat" was not required.

Stan Facy had been asked to coach University at Easter and onwards, so the only wins other than a tub slides crew at Autumn Regatta on the Torrens were by one crew at 3 country regattas - Maiden 4's at Murray Bridge, Mannum, and Junior 4's at Port Pirie.

The stroke man of this crew was awarded the trophy for the most improved Junior oarsman during the season, Keith Forwood.

So keen, in fact, was Keith Forwood that early in the season, sensing the lack of enthusiasm in the Club, he marched up to the Captain, Doug Linnett, and asked him if he could pick a crew that he reckoned could win a race or two from among the novice oarsmen.

Doug, a bit taken aback, as it was the Captain's prerogative to select all crews, but not one to stand on his dignity, said "OK; go ahead".

Keith chose Dick Clark, Dean James and George Krichauff to row behind him and they entered their tub slide in Henley on Torrens against a seasoned Torrens Club crew that had won tub slides consistently for many regattas.

When Keith's crew were pushing off the landing, Doug Linnett said, "You've picked a tough crew to beat; you'll never do it, but it'll be good experience".

On the way up to the start, Keith turned around and said, "We'll not only beat those bastards, we'll make them wish they never entered the race," and the crew was so fired up that they took off and the further they went, the further ahead they got. That Torrens crew stopped rowing before the finish and pulled out.

Later in the year, at Mannum, the same four rowed in the Maiden 8 which was a hard race, but straight after that, the four was entered in the Arnold Cup, for Maiden 4's, the next race on the programme, so they got in the clinker 4 and had to row another race to get down to the start in time, turn around and row a third mile race for the Cup.

But they won that one, too, and four further races that year, the only bright spark in a gloomy season.

The new season's intake had a lot of rowing potential. Names like Ian Sabey, Joe Vardon, Doug Chapman, Jack Giles, C.L. Jessop, W.H. Stephenson had rejoined and there was a Grayson cub.

Torrens Club was winning the major races, both Champion Junior 8's and Champion 8's with Adelaide picking up the minor points and some Torrens races over 1000 yards.

Bruce Boykett, Norm Buckenara and J.M. Jay all got married; but among the young bloods in the clubhouse after a row, there was a certain devil-may-care spirit, a mad gaiety, and a four consisting of Keith Forwood, Dean James, R.T. Shuttleworth and Doug Linnett, as stroke and Dick Clark as cox decided to go by train to Perth to contest the Centenary Fours. The surviving members of that crew, looking back, must wonder if they really were in their right minds; but they went, and returned, bearing no trophy, but a first hand knowledge of what the Nullarbor does to a man's thirst.

It was a pity that Western Australia's Centenary celebrations were held in 1929, as that was the beginning of the Big Depression. Adelaide Rowing Club was the only nominee in Centenary 4's from interstate, others no doubt being dissuaded by the distance to Perth, the time it took and the cost of accommodation and fares.

The East-West trip from Adelaide by rail took three days and four nights, the first leg by 5'3" gauge to Port Pirie, then standard gauge to Kalgoorlie across the Nullarbor Plain (4' 8 1/2"), and finally by narrow gauge (3' 6") from Kalgoorlie to Perth.

Israel Golovsky, with the official title of Manager, went along "for the ride", but the crew itself were in top rowing trim, and knew they were pretty fast, and Dick Clark could have rowed as spare man if needed. Being the only interstate crew, the Perth people lionised the Adelaide boys,

lent them a first class boat and oars, and made the best facilities, accommodation, publicity and invitations available, many of which they declined with thanks, knowing they were competing against a very good crew stroked by George Rogers. George was a local phenomenon who rowed in senior competition well into his sixties, although he was only in his forties in 1929.

The evening before the race the crew were invited to be present at the gala opening of a huge Theatre-Restaurant-Hotel complex, and accepted on condition they would not be expected to eat, drink or stay beyond the limits of their strict training routine. But the next day the crew were convinced their stroke man had been sabotaged, as he did not look or row anywhere near his usual form, and George Rogers' crew beat them easily, despite the efforts of Dick Clark from the coxswain's seat. Dick had to catch the next "West-East" (it was not called the "Indian Pacific" in those days) back to Adelaide before his annual leave expired, while the other five stayed on and enjoyed the celebrations.

Kerwin Maegraith, that well known caricaturist, often came to the Adelaide clubhouse and covered a whole sheet with characters he met there. His favourite face, and the rotund figure that went with it, was Israel Golovsky, an effervescent playboy typical of those late `twenties.

But some at least, of the members were serious in their training. Bill (Wilf) Stephenson beat the previous record for the number of miles rowed on the Torrens in the season by recording 502 miles.

A story Bill tells of the lengths to which a crew would go to try to win the other Gosse trophy for training awarded to the crew which covered the greatest number of miles in one day on the Torrens goes like this:

"Jack Hardy and I decided we would try to get the miles up by going down before breakfast, long before the trams were running, and Jack, who was thin as a rake, booked a taxi to pick him up about 5.30 a.m.

The taxi arrived, and Jack told the driver to put him off at the Morphett Street bridge, but before he let him off, he had been thinking about this serious young man with the sunken cheeks, and feared the worst, so he tried to dissuade Jack from throwing himself off the bridge and ruining a young life. Jack laughed like hell and told him not to worry, he was going for an early morning row, and invited him to watch the pair go out." The coxswain on that occasion, was Bill's wife, Jo.

One of Bill Menz's favourite expressions, when he was coaching crews, was "Get your jargoozle muscles working".

Notwithstanding the decision of the previous season to stay with poppet rowlocks, the Committee was bombarded with demands to "Give swivels a go", especially in the new boats, so they invited J.H. Gosse and some of the Vice Presidents who were interested to discuss the situation.

A compromise was arrived at whereby certain fours and pairs would be converted at the cost of £2-0-0 a pair, and oars adapted to suit so that members could form definite opinions.

J.H. stuck to his guns, but the general opinion seemed to favour swivels. Alf Grayson recalled the time when Ports lost a Champion 8's race when Clouston's swivel broke. But the fact that Oxford and Cambridge still used poppets was not brought up, so swivels continued to replace poppets.

With 3 regattas on the Torrens, 3 at Port Adelaide, country regattas at Berri, Renmark, Murray Bridge, Mannum, and Port Pirie, it was becoming necessary for clubs to do a lot of travelling if they wanted to win one or both of the Premierships. Competitive rowing was being allowed to claim a man's whole life except for the months of May, June, July, August and September. Even then, some clubs had programmes of winter rowing and football matches and keep-fit sports like boxing con­tests, sometimes interclub.

It was no wonder the Swimming Races fell out of favour, and some of the Club races were curtailed, and there was not the same attendance at functions such as Opening Day or Closing Day.

Rowing no longer was such a fashionable social sport. It had become even more competitive, more serious, more demanding.

The competitions for greatest mileage in one day on the Torrens were producing fanatics on the one hand, and, as a reaction against the constant demands to compete, a "playboy" element.