Murray Bridge senior crew was still unbeatable and although A.R.C. entered a crew in Champion 8's and got away at the start, the `Bridge crew, in rough water, came past, rating at about 30, the other crews rating at about 35. Adelaides swamped and learnt a lesson or two.

Some more promising young members appeared, among whom were J.M. Jay, famous more as a Secretary than as a rower, D.N. Linnett, Walter Wadey and G.D. Beresford, and although J.P. Marcus offered to present a trophy to the member proclaimed the most improved oarsman, the accent more and more was on competing in "public" regattas and regarding the Club regattas as training courses, and sculling had fallen from favour, anyway.

The Club continued to pick up Maiden and Junior wins at Henley-on-Torrens, and sent a very promising crew up to compete for the first time in the Berri and Renmark regattas between Christmas and the New Year on the River Murray.

This was another of those marathon affairs for metropolitan crews to contest. By this time, Mannum was a reasonable trip by car, and it was necessary for members of a crew competing at Berri on December 31st and at Renmark on New Year's Day to book a passage on Captain Arnold's paddle steamer, leaving Mannum in the evening of December 28th, towing the racing boats on a tender.

Steaming upstream, and having to negotiate the various locks took two nights and nearly two full days, arriving at Berri on December 30th in the afternoon, having stopped at Morgan on the way.

After the regatta on the 31st at Berri, there was a Smoke Social and a New Year's Eve party to attend and no excuses accepted, then on to the paddle steamer to Renmark for next day's regatta at Renmark.

The return journey began at midnight, and with stops to get clear of sandbars, calls at Loxton and Waikerie, Mannum was not reached until 2 p.m. on January 3rd.

The crew entered and won two races at each regatta. Some feat!

Even with good rowers like Norton, the Menz's, the Boyketts, Kennedy, Rogers and several others like Grummet and Westbrook, no club could get anywhere near to beating those giants from Murray Bridge, who once again were chosen to represent South Australia in the King's Cup in Perth. 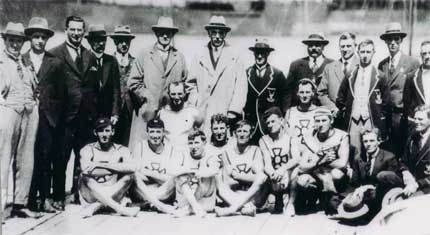 Once again they won, and were chosen to represent Australia in the Olympic Games in Paris in 1924.

Things were different on the other side of the world.

The funds that had been collected for the crew were skimped, so that the cost of transporting their 8 from the ocean steamers' dock to Paris by road was not allowed for, and they had to row it 37 miles up the Seine to Paris, through locks and narrows. Another thing they had to get used to was the 2,000m. course, after having been competing ever since 1911 over 3 miles. This was almost a sprint compared with their long races in the heat when the stayer won the day.

They were booked into a poky Paris hotel not very near the course, and what with the language barrier and the "frog" tucker instead of the steak-and-two eggs for breakfast and the meat-and-three-veg. meals they were used to, they were not at all happy. Even so, they did not disgrace themselves, and beat a lot of damn good crews rowing in lighter boats.

The question every rower in Australia was asking: how long could it last? Murray Bridge had had a stranglehold on the Senior Championship since 1912. At least their 9 best men would be in Paris next year when Champion 8's was to be contested.

First the new Governor H.E. Sir Tom Bridges, that famous Boer War veteran and World War hero decided he could not accept the nomination to be Patron of Adelaide Rowing Club as he had been asked, and accepted to be Patron of the S.A.R.A., and saw a conflict of interest arising. All Governors thereafter followed suit.

Secondly, it was decided to publish a Club Magazine called "Adelaide Rowing Club Review" the first issue of 4 pages to be distributed to all members at Opening Day and thereafter produced fortnightly, the subscription to be 6/- (shillings) per season.

Thirdly, Alf Grayson was ill, and Joe Sharp was convalescing so someone else had to be found for coaching and arranging musical items at Opening Day, when Signor Lombardi's orchestra was hired, and at Christmas Morning, when an accompanist and a soloist had to be enticed away from their hearth and home. Stand in, one Edgar H. Lucas, who got hold of Messrs Proctor and Curtis.

Some more promising young rowers started to show out of the season's intake in the form of R.D. Clark, R.J. Gillingham, R.T. Shuttleworth.

On Christmas Morning, a custom had become established that members overseas, or unavoidably absent, and feeling nostalgic, would send telegrams to the Secretary before Christmas Morning, to wish the season's greetings to all their mates attending, and these would be read out. This was one of the vintage eras for famous Secretaries.

The Club won two tub races and a pairs race at Henley, a tub race at Berri, the Arnold Cup at Mannum, and another tub race at one of the Port Adelaide regattas, not a very auspicious season for competitive rowing, but at least interest was kept alive.

With Murray Bridge seniors away at the Olympics, Mannum won both Champion 8's and Champion 4's, and won the Senior Pennant.

The GOOD news was J.M. Napier was made a Judge of the Supreme Court and Grayson had recovered.

These were the mid-twenties, the age of jazz and a tendency for the young to break away from old traditions.

The Patron they elected was an old rowing member, W.G. Auld, and so was the President, J.H. Gosse, two men who actively involved themselves with the Club, not just figureheads.

Jimmy Gosse announced he would donate a trophy to the oarsman who could prove at Closing Day that the distance he had rowed on the Torrens during the season was further than any other.

A few keen types worked out a system that involved a witness vouching for each entry in the book, and this would ensure fitness and improve rowing by repetition and mileage.

The new members this season that showed out were J.T. Sheppard, C.S. Coogan, a very experienced oar from Tasmania, G. Shoobridge, L.C. Maiden and J.S. Lord, both the latter being experienced oarsmen from University.

The number of active oarsmen was creeping up in a very encouraging manner, to 75.

The mileage fanatic at the end of the season was N.K. Baker, with 283 miles. F.D. Peterswald and W.L. Burton, still coaching, were elected to Life Membership and W.O. Menz was married.

There was talk about holding the Club Ball in the Floating Palais this year, but the management wanted too much for hiring it, as it was all the rage among the young, fashionable set. it was essentially a large wooden barge with a white painted wooden superstructure looking rather like a wedding cake, two separate levels, tethered alongside the bank of Elder Park just by where the fountain is today.

Instead, the Ball was held at Osborne Hall, (later bought by Balfours) in Gouger Street, and was a great success, 250 guests attending.

The Club won 6 races this season, 4 of which were at Port Adelaide and one at Renmark, a reasonable effort.