This was the first occasion on which the above-mentioned trophy was competed for, and the race attracted many visitors. The fortunate oarsman to win the race for the first year was Mr. F. W. Strother, who had some very hard struggles to gain the victory.

The Trial Fours, held on the same day, resulted in a win for the following crew:- W.G. Longson (stroke), R.J.S. Adams, J. Cairns and H. Dixson who was later to become a prominent Club President.

Two notable things happened that day the 8 men from Adelaide - 6 from Adelaide Rowing Club, one from Norwood and one from University - rowed against Port Adelaide on their own duckpond as it were - first, they showed that the mighty Port Adelaide men COULD be beaten by the "Townies"; and second, this race was the first of many, many con­tests that would take place between those two giants of rowing in the early days, Clouston and Grayson.

This race was held on the Port River, the Williamstown crew representing Victoria. The oarsmen selected for South Australia were - Kellet (N.B.C.), bow; Upton (A.R.C.), 2; Steel (A.R.C.), 3; Clucas (A.R.C.) 4; Adams (A.R.C.) 5; Turnbull (P.A.R.C.), 6; Smith (P.A.R.C.), 7; Cruickshank (P.A.R.C.), stroke, our Club having the honour of being represented by four members. Unfortunately the visitors proved far too strong for the home team, winning by over 10 lengths, but as this was the first Intercolonial, or as it is now termed Interstate, race held in South Australian waters it is worthy of mention, and more especially as it was the beginning of a series of such contests.

The Club met with great success at this Regatta and was victorious in four events, the most meritorious being that of the "Champion Pair" crew, A.J. Grayson (stroke), L.W. Grayson (bow), who defeated the Victorian crew (Albert Park Club) by three lengths. The race is reported as follows: "Considerable interest was excited in this event. Each boat got a good start and no advantage was gained until the Morphett Street Bridge was passed; then the Victorians began to drop astern. Their slight knowledge of the course caused them to steer badly, whereas the Graysons travelled as if they had a cox. At the Rotunda the local men were well ahead, and they passed the Adelaide Bridge more than a length to the good. They increased their lead to three lengths ere they passed the judge, time 7 min. 15 sec.

Reports of rowing events were given a great deal more space in the local papers than is the case at the present time, and reporters visited the river each evening and gave detailed descriptions and criticisms of the crews in training. These reports were very often most beneficial to the crews themselves, besides creating interest with the public. The "Register" of the 15th March, 1888, in its rowing notes, writes, inter alia: - "The Adelaides seem to have more crews afloat than any other club, or perhaps it is that their somewhat glaring colour catches the onlooker's eye".

However, the first portion of that remark is perhaps the most correct, as the Club was composed of many most enthusiastic oarsmen, which enabled nine crews to be entered in the Easter Regatta and what, perhaps, is more remarkable, seven of the crews won. The Club was now Head of the River, and had gained that position only through hard work whilst training, and due to the keen enthusiasm of its members.

The Senior Four, comprising L.W. Grayson (bow), F.H. Poole, G. Steel, and E.C. Clucas, met the Port Adelaide Senior Four and lost to them by three lengths. This, however, was not surprising, as the Ports had been together for a longer period and were more at home on their own water.

After the race the Adelaides entertained the Ports at the Central Hotel, where a tempting spread was provided. It is needless to say all present did justice to this meal, as the rowers had denied themselves all the convivial pleasures of the Christmas season in order to be fit for the race.

After the return of the Senior crew from the Port, crews were immediately selected to commence training for the Autumn Regatta.

The rowing at this Regatta was better than that witnessed in previous years, and the races were more keenly contested than in any previous year during the experience of the Association. Our club was represented in six events, and won five of them, viz. the Maiden Fours, Harrison Cup, Secretary's Cup, Torrens Fours, and Ladies Challenge Shield. 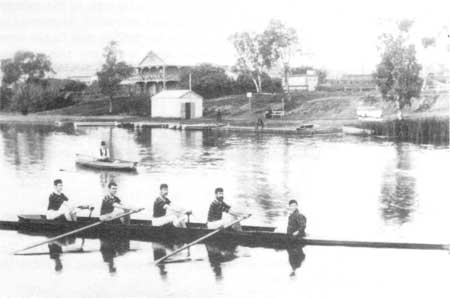 Picture of Four. (Taken after the New Shed was built).

The report of the Regatta concludes with - "The weather was cold and boisterous, and in the early part of the afternoon heavy rain was experienced." This no doubt, was the introduction to the big flood which did so much harm the following week, and owing to which our original shed was washed away.

Obviously, Adelaide Rowing Club was on the crest of its first major wave of success and enthusiasm. How great was to be the fall therefrom! (See next episode)

On the 17th April, 1889, the citizens of Adelaide had suffered three days of drenching rain, and many of the unfortunate householders in the low-lying lands were flooded out. The Torrens came down in flood, and despite the fact that the weir gates were open it flooded over its banks and besides other extensive damage it washed away the shed and fleet of the Adelaide Rowing Club.

In those days the Club shed was nearer the bank than it is at present and had to withstand the full force of the rushing waters, but probably owing to weak foundations the timber building was lifted from the ground and borne on the rushing torrent straight to Morphett Street Bridge, where it remained, the boats being dashed against the bridge and broken to pieces, the debris eventually finding its way gradually down the overcharged stream.

The Club possessed some of the finest boats to be seen in the colony, all of which were lost together with valuable oars and sculls, representing £800 worth of property. The following days the bridge and banks were lined with a sympathizing crowd, who were watching the various members carrying out the salvage work amongst the debris accumulated at the bridge. Probably the laugh and joke when one sank up to the neck in the yielding mass, and another unprepared for the work dipped his im­maculate trousers to the knee in slime and sludge, only thinly covered the sorrow which all felt at the destruction of the Club shed and fleet.

It was, indeed, a sorrowful scene to the members of the Club. Eight years of hard strenuous work washed away over-night.
(End of J.M. Jay's narrative)

However, the members instead of doing nothing but lament their loss, got busy and commenced organizing concerts, fetes, and other attractions to raise necessary funds to replace the shed and fleet, and in this direction received the whole-hearted support of the people of Adelaide and the surrounding suburbs.

On the 17th May Wirth's Circus gave a benefit night to the Club, and a cake fair and concert was opened in the Town Hall on the 31st May by the Countess of Kintore. This fair was continued for several days. Besides these functions innumerable other concerts and entertainments were given during the ensuing months, the funds from which enabled the Club to commence rebuilding operations early in November 1889 - seven months after the disastrous flood.

As well as rebuilding the shed, seven new boats were purchased from Messrs. Edwards Sons, of Melbourne.