Mr. Henry Upton, who had joined the Club in May, 1884, was elected Captain in December of that year having had senior rowing experience in Melbourne and Geelong, finding that his business engagements (he was a lawyer) would not allow him to carry on as Captain, resigned, and his place was filled by Mr. John Milne, a position he held for twelve years, rendering splendid service to the Club.

On the 5th April, 1886, the clubshed was visited by Mr. William Beach, then Champion Sculler of the world, who was on his way to England, after having defeated Hanlan. Mr. Beach was accompanied by Mr. Upton and members of the shed to the York Hotel, where the party had luncheon. 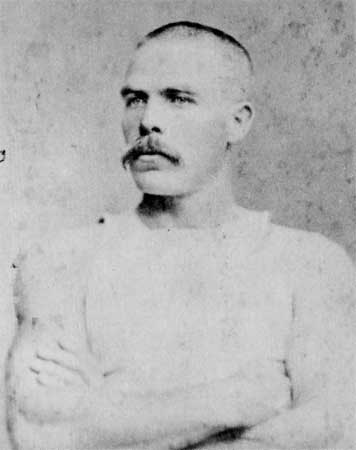 The membership of the Club had been steadily increasing, and the Committee recommended extensive alterations to the boatshed to enable an eight-oar boat to be accommodated and allow for more dressing-room. The tender of Mr. John Gray was accepted and the work commenced. To provide funds for a new best boat a concert was held on Tuesday 22nd June, 1886, under the patronage of His Excellency Sir W.F.C. Robinson, K.C.M.G. and was well attended. Reports say that it was one of the best concerts given in Adelaide for a long time. Selections of vocal and instrumental music were rendered by some of the very best talent in the city.

On the 16th June, 1886, the new shed was officially opened and everyone expressed pleasure at the new arrangements. Colonial beer was seen flowing freely, and the members concluded the even­ing with a social at the Southern Cross Hotel. Arrangements were made with the City Council to extend the landing in front of the shed, and to assist the Club in planting trees to improve the beauty of the surroundings. The Club was now fully prepared for the coming season and was striving to obtain sufficient funds to purchase a best four.

So the man of the moment, Henry Upton sends in his resignation as Captain at a Special Meeting called for that purpose.

But the members (12 in number) won't have it, and he agrees to stay on until the end of the year if some of the Captain's duties are taken by the Vice- Captain and Secretary. And so it was that finally the great Henry Upton, after a public barney with Mitchell, resigned and a new era began for the Club, under one of its famous Captains, John Milne, on April 10th, 1886.

The decision to extend the boathouse and to buy a new best four put pressure on the Club to raise money, and so I Zingari, the Gypsies, had to put their talents to the test as entertainers, and organised a concert to which they invited the Governor, and this was the first of a long list of similar concerts that would set the way for many future Committees to raise funds if they wanted new boats.

The Rowing Season 1886-7 commenced on the 18th October, 1886, when the Club's Opening Day was held. This function attracted a large number of members and their friends. During the afternoon a procession of eight boats left the landing and proceeded to the Weir and then to the City Bridge and back to the shed. On nearing the landing an amusing incident occurred. The leading boat in which the Captain (J. Milne) and Vice-Captain (E.C. Clucas) were rowing, with the President of the Association (Mr. E.G. Blackmore) steering, either from being too heavily weighted or from some other cause, filled and sank. The occupants, looking anything from happy, walked ashore where their many friends greeted them with roars of laughter.

Several thousand spectators assembled at Port Adelaide to witness the races, which was the first eight-oar race held in South Australia.

During the race an accident happened which spoilt the Portonians' chance of winning. No. 3 in the Port boat (J. Clouston) broke his swivel rowlock and thereupon throwing his oar overboard he himself followed and swam to No. 1 Beacon, where he was picked up by a passing boat.

The Metropolitan crew were given the verdict by three lengths, but a much closer race would have been witnessed only for the unfortunate accident to the Ports.

This would be the first major win to A.J. Grayson, then aged 18, who went on to win a record number of races for Adelaides, the most famous stroke in the history of the Club. 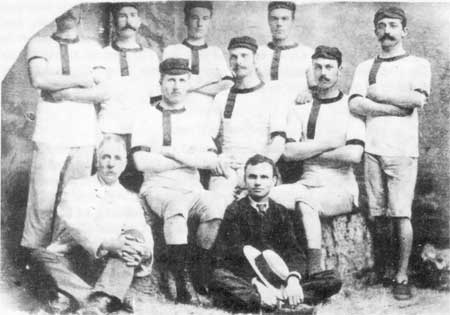 The Association Spring Regatta was held on Torrens Lake on the 18th December, 1886, when the Adelaides annexed the Junior Sculls, Maiden Fours, and Senior Pairs. The Trial Fours held by the Club on 31st January, 1887, was won by the Captain's crew: - J. Milne (stroke), F.W.Strother, N. Lucas, and J. Galbraith.

At this Regatta the Club had a good deal of success, and won the Ladies Challenge Shield and the Secretary's cup, the two principal races of the day. (See glossary for crews).

As the winter months were approaching active rowing had to take second place to football, but the Club being desirous of keeping members together formed a gymnasium class, which was well patronized. The second annual concert was held in the Albert Hall on the 22nd August, 1887, and was considered as great a success as the first.

The Club received an invitation from Sydney asking for a crew to com­pete in the Jubilee Regatta, but it was not possible to do so.

Mr. Heseltine donated a trophy, which was called 'The Heseltine Cup' and which was to be competed for in sculling boats with a time handicap. When won twice by the same member he was to become the possessor. A description of the cup reads: - "It stood about 15 in. high, and the stem was formed by three oars crossed in the middle and attached to a ship's wheel. Above was the cup itself, the lid being surmounted by an anchor and other appropriate devices. On a square base, from which the oars spring, are two well-modelled figures of oarsmen, each holding a boathook."

< previous I Zingari: The origins of the Club