2. Formation of the Association

The following essay appeared in the Victorian Rowing Register 1878 by M S Glynn and provides an insight into coaching at the time of the formation of the Association.

The duties of a Rowing Coach are of such an important nature that “A Chump " may perhaps be pardoned for venturing a few modest criticisms on the present style of teaching the young idea how to row, and one or two suggestions to the estimable gentlemen with whom rests the tutelage of the coming generation of rowing men.

The time is not so very long past when this position was looked forward to as a fair reward at distinguished performances on the river, but these notions have become somewhat old-fashioned, and nowadays we are to believe that a “Coach”, like a poet is born and not made. This idea is doing serious harm on the river, and it would be well of the Club authorities set themselves seriously to the work of obtaining efficient coxswains for practice crews, ad crews in training for club-races, instead of entrusting them to the tender mercies of any tyro too lazy to row himself, and whose only recommendations are a loud voice and a power od standing up in the stern sheets of a boat without upsetting her. It is not only the inefficient and often radically incorrect teaching that is to be deprecated, but the system begets a spirit of disrespect and inattention to orders that is likely to prove a vital impediment to success, even where a more efficient coach is in command.

The habit of coaching crews from the coxswains’ seat, which is generally in force on the Yarra, is not desirable in any but pair oared boats. In fours, and more especially in eights, a great part of the crew is hidden from the coach, and he must confine his attention to the oars, and entirely neglect the bodies and arms hat wield them. The necessary consequence is that his men fall into all the ordinary faults of screwing, bent backs, crooked arms, &c., and even exaggerate them in their eagerness to attend to time in the catch, and finish the only points which the coxswain can criticise and control.

The stroke of our late Intercolonial Eight (Mr. Fairbairn) was fully alive to this difficulty, and lost no time in adopting with his crew a system which he had seen practiced at the English Universities. He would constantly take them out two at a time in a pair-oared tub outrigger, and sometimes racing sometimes rowing, but always keeping his attention fixed on one particular fault, while he wished to remedy, would be sheer perseverance succeed in eradicating it. This method may be successfully adopted to remedy any peculiarity in an otherwise desirable man, and even to instill all the characteristics of scientific rowing but to secure a finished style and swing in a crew, long and constantly practice together is absolutely necessary; and here it is that the difficulty of keeping a careful watch on the men arises. Not only is the coxswain's seat a bad position for the purpose of coaching, but it is always injurious to the dash of the crew, and nearly always to their racing boat to be burdened with a heavy weight in the stern. The best place for a coach is the stern sheets of another boat, if a crew can be obtained fast enough for the purpose. Lacking this, a ride on horseback, or, faute de mieux, a run along the river bank by the side of the crew, should be resorted to. It is true that the Upper Yarra presents difficulties not easily surmounted by pedestrians or horsemen, but I believe a good view might be obtained a, racing craft from horseback over the two-mile course between the Melbourne Sheds and the Church-street bridge, and for a shorter distance coaching may easily be done by a pedestrian. 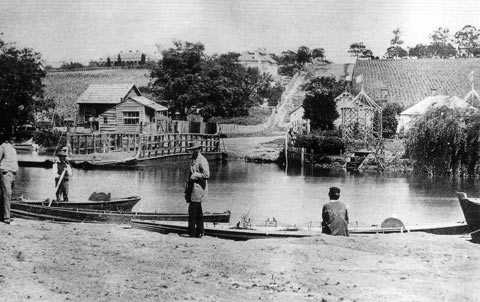 Punt Road ferry showing the narrowness of the river

And now for one or two suggestions for the benefit of amateur coaches:-

In the first place, never bully your crew, and avoid reproving a man too often or when he is endeavouring to amend. Silence is nowhere more golden than here, for if the crew once understanding that the coach finds fault to show his own penetration, or in order to hear himself talk, or for any other unworthy motive, he may bid a long farewell to his influence and authority. Above all, shun. the odious habit of finding fault with the junior members of a crew and sparing the men with more reputation; once lit a boat, all individuality should be extinguished and the veteran at the stroke or seven oar should be reprimanded for his misdeeds as roundly as the tyro in the bow. This may seem too self-evident a proposition to be insisted on, but it is as true as it is unfair that nearly all amateur coaches give in their adherence to this heterodoxy:—

“That in the captain is but a choleric word,
Which in the private is flat blasphemy."

When "slanging" a man in public has lost its force by constant repetition, it will often be found a good plan to abandon frequent reprimands in the boat, and instead to take the delinquent quietly aside after the row and point out his fault and the mode of correcting it. Any instruction is much more easily comprehended when given thus at leisure than in the excitement of rowing. Besides, the tempers of the different men must be studied, and it will be found, that many dispositions take more kindly to a private lesson of this kind than to a showing up before the whole of the crew. Be careful that your men are comfortably seated in their boat: this is a matter that meets too little attention, though it is of the first importance , and its neglect is the fruitful source of faults in rowing. No man can row effectively unless he is seated before his work, and at a comfortable distance from his stretcher, and, unfortunately, few men are quick at finding out what is the exact cause of their discomfort. It used to be said years ago, that Nat. Cullen could not only row a good oar, but could fix every man's work in the boat as well as Dick Fuller himself; but mechanical genius is rare on the river, and when difficulties of this kind present themselves, it is well to call in the assistance of a professional boat-builder. 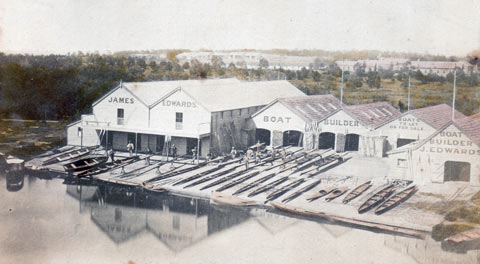 Edwards Boatshed at Prince's Bridge circa 1870

Set your face against spurting and all violent rowing in the earlier stages of training. It begets a wild style of performance, and often injures the men. Racing with other boats should be avoided on the main account, and for the further reason that it induces slovenly and inattentive rowing when the excitement of a contest is taken away. It should be permitted only in two contingencies – 1st. When the men are depressed (a very common occurrence in training), a spurt with a somewhat inferior crew may be allowed, to put them in heart with their own performance, and bring them back to the sheds in good temper. 2nd. When a crew is strung up to racing pitch, a trial may be had for the purpose of testing pace and endurance; but a coach who is anxious to keep a spirit of good temper and unanimity in his crew will always take care to avoid the demoralization of a bad beating in any such trial.

Finally, insist on strict attention to style and swing, even while paddling. The advantages to be gained by adherence to this rule are almost incalculable, and nothing tends so much to produce the machine like precision which makes the principal merit of a racing crew. There are always some unquiet spirits to be found, who rebel against this discipline, but they should be made in all cases to understand that they must submit or leave the boat. A good man who is incorrigible in this respect is well exchanged for an inferior man with more pronounced habits of obedience.