At a meeting in the Macquarie Hotel, Port Macquarie on 6th June 1981, a resolution was passed to form the ‘Central Districts Rowing Association’ for rowing clubs within the boundaries of the Nambucca River in the north and the Hawkesbury River in the south. A committee of president Alan Sawyer (Manning), vice-president Col Randall (Hunter Valley) and secretary/treasurer Graham Nix (Manning) was elected. A club affiliation fee of $40 was set to cover the $100 affiliation fee with NSWRA. Founding members were Manning River RC, Hastings River RC, Hunter Valley RC, Central Coast Youth Club RC and NUBC.

In July, a CDRA bank account was established with an initial deposit of $140.50 transferred from the NRRA, being half of that association’s bank balance at the end of June.

The primary purpose of the association was to provide a means by which the local clubs could affiliate with the NSW Rowing Association. Although this could be achieved through the Northern Rivers association, the CDRA offered the additional benefit of a voice in discussions with the NSWRA that supported the interests of the mid-north coast rather than the far north.

By this time, Hunter Valley RC had ceased to operate and NUBC was in hibernation. Port Macquarie went into recession soon after with the 1984 regatta their last to be conducted on the June long weekend. The club handed the shed keys to the council who called a public meeting in August where the keys were passed to Jim Young and Paul McReynolds who reformed the club as Port Macquarie Rowing Club.

The 1984 AGM was the last meeting held for three years with very little association activity during that time. Payment of the NSWRA affiliation fee in 1985 left a balance of $9.03 in the bank. No club affiliation fees were received by CDRA and no affiliation was paid to NSWRA for another two years. The association needed a kick start.

In 1980 Bob Williams, a life member of Manning River RC, had moved to Warners Bay on Lake Macquarie where he coached schoolboys in a reg four on loan from Manning River. In 1987, boat storage was obtained in the Speers Point Sailing Club shed and Hunter Rowing Club was formed. 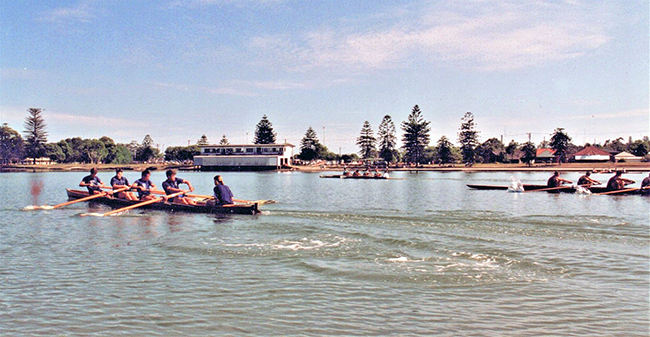 With the advent of Hunter as a viable rowing club in the Newcastle area, moves were made to re-invigorate the CDRA. A meeting labelled “annual general meeting” was held in the Speers Point Sailing Club on 9th August 1987 with representatives from Manning River RC, Port Macquarie RC and Hunter RC. Dave Munro (Port Macquarie) was elected president and Paul Drinkwater (Hunter) vice president with Graham Nix continuing as secretary/treasurer. A new fee structure was introduced with a $20 affiliation fee plus capitation fees of $5 per senior rower and $2 per junior. These fees would remain unchanged for 7 years. Member clubs of the re-activated CDRA were Central Coast Youth Club RC, Hunter RC, Manning River RC, NUBC and Port Macquarie RC. Four regattas were foreshadowed: Manning in October, Hunter in November, NUBC in March and Port Macquarie in March or June.

In the following August, an attempt was made to hold an annual general meeting that failed with only 3 people in attendance. The $250 affiliation fee to NSWRA was outstanding with insufficient funds to meet the debt. The secretary/treasurer was directed to “write to each club outlining the alternatives to the continuation of the association” and asking clubs “to advise … if they feel that the association should continue to operate”. CDRA had been re-activated but not re-energised.

In a document titled ‘Future of the Association’ it was stated “It is fair to say that virtually all that has been achieved is affiliation with NSW Rowing Association each year.”

Alternative methods of affiliation were given as:

The adjourned annual general meeting was successfully conducted in October 1988 with the resolution “that the current clubs remain within the CDRA and that the association continue in its present form”. Dave Munro and Graham Nix retained their positions with Robert Williams (Hunter) elected to the position of vice-president. Regattas were listed as Hunter in November, Manning in January and Port Macquarie in April. With the payment of fees to CDRA, the NSWRA affiliation fee, due before the beginning of the racing season, was finally payed at the end of the season.

Regattas in the mid-north coast region up until this time had been club based with the host setting the events, accepting the entries, conducting the draw and running the regatta. Entry fees were paid to and retained by the club. In recent years, regattas had been listed on the NSWRA regatta card having the status of NSWRA pointscore regattas from time to time.