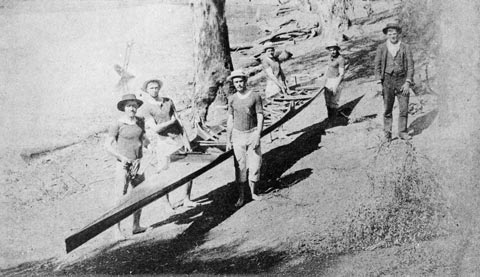 Oars were not the only problem for rowers. Some boats were hindered when they fouled the weeds near the island. In 1913 the Committee was able to report that the Lake itself had been cleared of rushes for the Regatta. At the 1884 Regatta there was a complaint about some hot headed youths who raced on horseback along the banks of the Lake, thus raising the dust and spoiling an otherwise pleasant day. Horses provided another problem for the Committee. Fencing had to be erected to keep them away from the booths.

Betting, another hangover from professional days, continued to plague the Regatta crews for a while. After a few years of amateur status, the Regatta Committee were warned by the V.R.A. that unless betting between rival crews ceased, the amateur status of the Regatta would be in jeopardy.

Of course small fry bookmakers continued to operate among the Regatta Spectators for a time, taking "bob" wagers. One such character provided interest at the 1894 Regatta - more in the way of foot-running than rowing. "At the conclusion of the Challenge Race this particular person commenced a Steeplechase run over the logs towards the river, followed by a large section of the crowd who had entrusted their "bobs" to his care. At first it appeared as though he would make good his escape, but one of his pursuers had a canine friend whom he called into the chase. "Bookie" was just taking a flying leap over a three feet log when he was caught by the fleshy portion of his body and brought to a halt. It was a hot day and "Bookie" had been keeping his whistle wet throughout. Being unable to settle, he went on his bended knees and begged for mercy when his pursuers threatened to dip him in the lake. After it was ascertained that all the 'bobs" were in the pockets of publicans, "Bookie" was sent on his way with the assistance of the boot."

The 1893 Regatta is' worthy of a mention because of the poem which the great day inspired in a contemporary local poet (see Appendix C.) By way of contrast the 1895 Regatta is more memorable for a less pleasant incident. Echuca's boat was four feet less in length than local boats and won every race for which it was entered, including the Grand Challenge. At the request of the defeated teams, the Regatta Secretary, Mr. Gordon, asked the Echuca men who had also won the Four-Oared Maiden and the Maiden Pairs to sign a Statutory Declaration that they had never won a maiden race before. The declaration was drawn up by Mr. Herrin, J.P., but the Echuca men refused to sign it.

1911, and the Murray Rowing Association celebrated the Fifty Year's Jubilee of the Regatta. Among the prominent members of Parliament present at this Regatta were Messrs R. T. Ball (the member for Rutherglen), John Bowser (member for Wangaratta) and M. Malony (M.H.R. for Indi). Two of the oldest rowers present were Mr. J. M. Grimmond and Mr. G. Chandler who had attended 48 of the 50 Regattas.

The Regatta continued to be held during the years of the first World War but participation gradually dwindled until in both 1917 and 1918 only two clubs competed. Rutherglen-Lake (the Clubs of Rutherglen and Lake Moodemere having united just before the commencement of the War) was to have competed against Wagga in 1917. Wagga won the Challenge Race but the crew was from Wahgunyah. Finding that the Club was unable to fulfil its entry at the Regatta, a Wagga enthusiast contacted Wahgunyah friends who cheerfully substituted for the Wagga crew. Not only were competing Clubs limited to two in 1918 (Corowa and Rutherglen Lake), but also the entries in the sculls were down to two - L. Jackson and C. Hiskins, both from Rutherglen-Lake.

Corowa Club's activities for a few years now had been one of life on the ocean wave, despite the fact that one might expect a town so close to the river to be strong in rowing throughout the existence of the Regatta. Although the township commenced as Wahgunyah North in the late 1850's, it developed rapidly and assumed its own identity in the 1860's, yet it is not until 1873 that the Regatta's title is that of Rutherglen, Wahgunyah and Corowa. Wahgunyah was the foundation town (having commenced as a port in 1854 and having begun the Regatta in 1860), but as soon as Rutherglen developed during 1860, the new township immediately was responsible with Wahgunyah for continuing the Regatta in its present form in 1861. The first Corowa crew named in records is found in 1881, when E. Clayton, stroke, T. Donelly, A. Clark, P. Ritchie and V. Crisp, Cox participated. However these were not known as a Corowa Crew until the next year when they won the Maiden Fours. On the other hand the Club itself must have been in existence long before this beÂ¬cause at the time of the 1878 quarrel already referred to, the papers had hoped that in the following year Corowa and the other two Clubs (Rutherglen and Wahgunyah) would unite and hold meetings alternately on the Lake or Murray River.

Corowa's first break through in the Grand Challenge Race came in 1907 and 1908 when a strong crew won the Challenge in both years. The Crew was R. Ritchie, bow; F. Kuschert, R. Wise, D. Oswald, stroke; and C. Nugent, Cog. This must have been the height of the Clubs strength in the early years because from then on existence waxed and waned.

In 1906-07, the re-establishment of the Border Rowing Club by Mr. Frank Bolt was reported when that Club was presented with two second-hand racing boats. However this Club does not refer to either Corowa or Cobram as Corowa was referred to as a Club in 1908 and Cobram Club in 1906 was reported to have sent their boat by train to Rutherglen for the Regatta at a cost of Â£7. Thus the geographical location of this Club is at present uncertain.

By 1913, Corowa Club was reporting to be "hibernating". During the first World War and the early 1920's; participation by the Club in the Regatta was spasmodic, with a marked decline occurring between 1923 (when the absence of any crew from Corowa was frowned upon by the "Rutherglen Sun"), and 1927 (with Corowa being described as showing "little interest" in 1925). Nevertheless, in September 1928 the Club was reformed with D. C. Brown as President, R. Constantine as Secretary, and D. Oswald as Captain. Reorganisation paid dividends, in 1936, one member, J. Nielson, rowed for Victoria and in the same year another member, W. Jones, was also selected for the Victorian King's Cup Crew, although unable to row on the day. With R. Howard as Secretary, for many years since 1946, interest in the Club has been sustained and in 1960, B. K. Howard and S. J. van Klavern with M. Bugler, Cox, won the Junior Paired Oared Championships of Victoria. 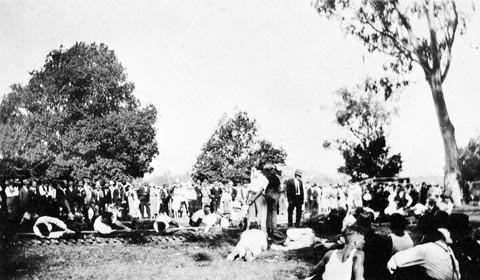 During 1932, because many Melbourne Clubs had begun to take part in the Regatta, Mr. I. Chivell (The Mayor of Corowa), tendered a civic reception to four V.R.A. Officials. The Melbourne Clubs were beginning to find the Regatta attractive and were attending in larger numbers, encouraged during the 1920's by the adoption of outrigger boats by Clubs of local Association, and by the surveying of the new straight course to suit such boats, as well as by the availability of better transport facilities. For the 1931 Regatta, one Mercantile member, J. R. Clements had arrived by "plane" landing in Hiskin's paddock not far from the Regatta grounds.
Because of the low level of Lake Moodemere in 1939, the Regatta that year was held on the Murray River at the rear of the Wahgunyah Nursery. This was the first change in the venue of the Regatta since the early years. 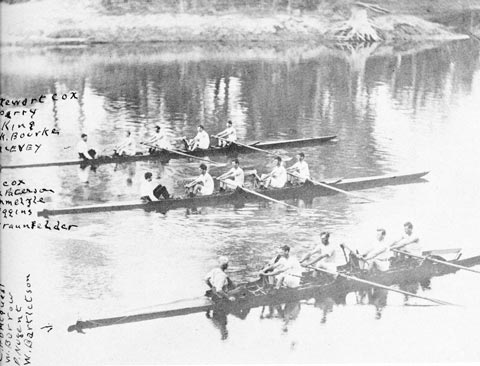 < previous Maturity and its Problems