Corowa Rowing Club was established in 1863.

The foundation of rowing around this district was laid in 1860 by crew members of the paddle steamers which traded between Wahgunyah and Echuca. Some history of the first races in 1860-1862. No bridge spanned the twin towns of Corowa and Wahgunyah back then, a punt did brisk business carting human cargo. In 1860 at the Wahgunyah wharf, five paddle steamers lay at their moorings while passengers and crew joined the fun.

In 1861 there were 3000 people present to watch the race: they travelled in buggies, drays and dog carts with a few coaches from the goldfields at Beechworth as well. Police from Albury attempted to close a shanty bar on the NSW banks of the river, but they were unsuccessful.

From 1862 the regatta moved from the river in Corowa to Lake Moodemere, here there was a race for Aborigines in bark canoes, but the main event was the Challenge cup which was rowed over a four mile course.

1893 saw the Borough Handicap Gig pair oared won again by the same crew D Nixon, D Kuschert with M Grimmond. In 1894 there was a change of cox with Buckley stepping in to win the same race.

1899 we won the Consolation Four in Gigs again with C McLellan, A Stephens, R Ralston and T Oglovie (cox unsure).

The club first win of the Grand Challenge Cup Fours at this regatta in 1907 with the crew D Oswald (Stroke), R Wise, F Kuschert, R Ritchie, C Nugent (Cox), they also won it in 1908.

WWI did not leave the Club unscathed. Private William Herbert Crisfield, blacksmith, the eldest son of Mr. John Crisfield, veterinary surgeon and equine dentist, died in action. William was well known throughout the Riverina for his sporting prowess in rowing, football, coursing and athletics. He enlisted August 1914 in Corowa, left Melbourne in October 1914, was wounded at the historic landing at Gallipoli on 25 April 1914, (severe gun shot wound to the thigh), taken to Alexandria on 30th April 1915 and died there on 6 May 1915. In a letter to authorities, a family friend Fred Carrigg noted that William was his father’s favourite son and whilst his father was proud that he fell for his country, grieved terribly for him. 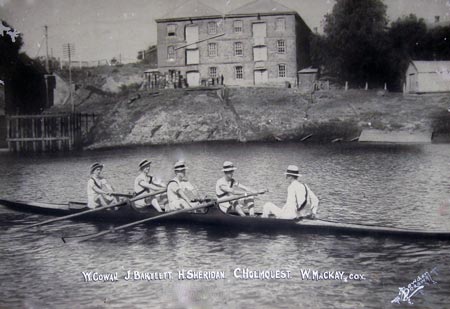 These early races where professional with cash prize’s and run over a course of one mile, 500 yards with a turn around an island. Needless to say when around the island and out of view of the judges and most spectators many underhanded tactics were resorted to. At the old professional gatherings it was quite in order to ram your opponent at the turning point of the course or use other various devious methods to lead at the turn. Rule 8 as quoted in the 1873 programme under Appendix B merely forbade the use of hands during the confusion of turning. Boats and oars have many unusual uses as old professional rowers had discovered.

Even in the early years of the MRA regatta interference was a problem because the “Murray Gazette” on March 17th 1863, complained about “shameful fouls” in the handicap race of that year were one boat asserted that the crew of another boat had tried to push a man out of their boat with an oar. The accused crew retaliated with the protest that their opponents had tried to unship their rudder to put them out of the race. In another year it was reported a fight had developed while rounding the island. The Rutherglen crew led until the turn when the Corowa boat ran full tilt into them and the “Lady of the Lake” went under with the whole bow smashed to pieces. Both crews at least stoped but the Rutherglen crew requested that the race continue so the Lake boat passed both the others and won easily. The Rutherglen crew were rescued by pleasure craft and put ashore. This incident gave rise to a little unpleasantness but beyond a little blood spilt, no harm resulted.

This event was contested in Gig fours, one of which was displayed on 150th celebrations in 2013 in the shed. This particular boat was purchased off Rutherglen rowing club for the princely sum of 25 pounds in 1929.

The boat is now over 100 years old and not quite ready to race, and is usually housed in the Corowa Federation Museum.