The 2011/12 year saw the club not as competitive on the water after such a successful year previously.

The November 2011 committee meeting had a funny ending, about half way through the power went off, lucky Robert had torches in his bag so we could finish the meeting off.

April 2012 saw the order of another elite heavyweight double that Swift Racing is going to give us at cost price $5500 if we name it after our 150th year celebrations next year.

A flat screen tv was purchased for the gym area for $398.

2012 State Championships were held at Nagambie, but for the first time in a few years no Gold was brought home, we did win three silver medals though:
Andrew MacDonald & Josh Cooper in the U17 double over 2000metres,

At the Victorian State Secondary School Championship the club had success with Megan Vogel winning the Year 7/8 single scull and Brad Pearsall getting a very close second in the Male Year 7/8 single. We took 34 rowers & supporters to Geelong.

2012 Victorian Junior School Boys State Championship saw Brad Pearsall get 2nd in the Year 9 singles. John Raschke got 2nd over 2000m in the open single scull. Josh Cooper won silver in the Year 10 singles and Andrew MacDonald won the B final in the Year 10 by 25 seconds.

Over the winter in 2012 the club underwent extensions (already) with another bay being added towards the bridge. This was done via a series of working bees with all labour donated. This allowed for an expansion of the gym and also more boat storage.

It was decided to name the quad that arrived last season ‘Max Maclean II’ due to the retirement of his originally named boat and for his continued support of the Rowing Club.

This season has seen a huge influx of members especially juniors. It is nothing unusual to see on Monday nights no boats or oars still in the shed available to use. Our membership is over 130 this year which is our highest number ever. Our fees this year have been set at $150 adults and $75 for Junior’s with social members charged $20.

To encourage the social side of the rowing club, this season we decided to hold pizza nights – the first one had 46 people attend with us cooking 36 large pizzas, but the 2nd night just before Christmas had 90 people attend and 58 pizzas cooked!!!!

We also held a ten pin bowling social night for the first time – this is something the club will look to keep doing.

The rowing club also introduced a new way of fundraising at the MRA regatta, with us taking on the coffee along with the bar – due to the cold snap in the weather we sold over 1300 cups of coffee but not too much beer. The MRA weekend continues to be a major fundraiser for us with this year raising over $10,000 in profit via the bar, coffee, raffle and the MRA dinner for 350 people.

This year has seen some dedicated kid’s row at some early regattas with great success as the club plans to mount a campaign to win at State and National level again.
Sara Williams and Megan Vogel are a leading force in the U17 doubles and singles with wins at all regattas. They also have teamed up numerous occasions with Demi Whitechurch and Georgina Pearsall cox Tom Whitechurch to win D grade quad scull.

Andrew MacDonald, Josh Cooper, Bradley Pearsall are all still training hard and competing well in U17 and D Grade competitions.

We also have a crew of masters that are competing at regattas – Julie Underwood, Jill McCrum, Cherie Collins, Bronwyn Collins, Sally Casey are all focusing on the upcoming state titles.

Robert Eyers will be aiming to compete at this year’s Master Nationals that will be held in Canberra.

Some of the older boys are still rowing – John Webb, John Raschke, Matt Vogel and Lewis McCrum which is great to see after a year off.

3rd February 2013 will see the christening two new swift racing double sculls – both of these will be named in honour of our 150th year. ‘D C Brown II’ in honour of our longest serving President and life member and ‘Corowa 150 Years’. These will be christened by Triple Olympian Sarah Tait and her husband, Bill Tait who is the head coach of rowing at the Victoria Institute of Sport at our family day. 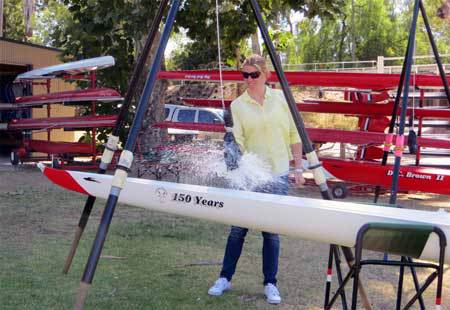 This history was complied by Stacey Whitechurch in conjunction with Robert Eyers – if there are any errors then they are the authors own and please let us know so we can adjust accordingly.