We must now hark back to 1866. On Monday, June 17 of that year a number of gentlemen of the Victorian Public Service held a meeting at "Freemason's Tavern" for the purpose of forming a new rowing club. According to "Bell's Life in Victoria and Sporting Globe" dated 26-6-66, "Upwards of 90 names had been subscribed. The Hon. George Higinbotham, M.L.A., had consented to be President. Mr. F. Ross was elected Captain, Mr. W. H. Hull, Hon. Treasurer, and Mr. H. T. Gomm, Hon. Secretary. It has been decided to have quarters at Dick Fuller's Boat Shed."

Some weeks later a provisional committee composed of representatives of the various departments was appointed to carry out the resolutions of the meeting, and to report progress one week later.

The date of the inaugural outing of the Club was fixed for Saturday, January 12th, 1867. "Remus" one of two contributors to the "Aquatics" section of "Bell's Life, etc." of 19-1-67 wrote: "Notwithstanding the intense heat of Saturday last, the opening ceremony of the Civil Service Rowing Club must be considered as highly successful." (The temperature was over the 100 mark in the shade, with a stiff north wind).

To continue the account by "Remus"-"The oppressiveness of the weather seemed, however, to be set at defiance as three o'clock approached, the hour fixed for the starting of the procession of boats from Princes Bridge. Punctually at that hour about half a dozen `fours' were launched and manned . . . Three hearty cheers having been given . . . the procession, headed by the Melbourne Rowing Club outrigger four got under weigh (sic); the brothers Mitchell (Richmond R.C.) followed and then came several fours and several pairs and scullers. The boats proceeded up stream as far as the 'Sir Henry Barkly', beyond which few seemed inclined to go without giving the host of that establishment a call, he himself a rowing man. Accordingly all disembarked with one decided object in view, namely to slake the 'arid thirst' created by rowing in the broiling heat of such a day."

Thus was launched a club which for 56 years was to progress in good neighbourliness and friendly rivalry with the Melbourne Rowing Club until that day in 1922 of happy memory when they linked fortunes under the present title as already related.

The original rules confined membership to all past and present members of the public Service (with certain exceptions, such as manual laborers, members of the Police under the rank of Sub-inspector, etc. About 30 years later when the club was in the doldrums the rule on eligibility was broadened to admit a certain percentage of members outside the Service, but retaining the offices of President and Captain for Service officials. 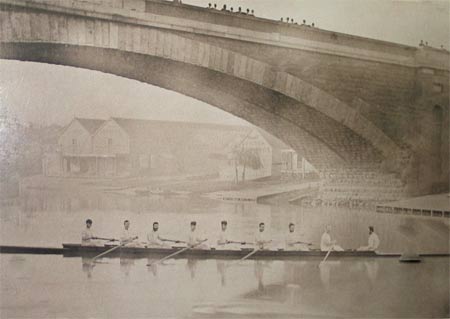 The following year Melbourne Rowing Club turned the tables on their conquerors in the first race.

On numerous occasions "Service" has won the V.R.A. Premierships One notable period was 1911 (a) and 1912 (b) and 1913, again in 1919 when the Junior Pennant was won. Senior Pennants were won on several occasions. The year 1916 was notable for a will in both divisions.

The Club was fortunate to have, for a number of years, the enthusiastic help of the late Mr. Ted Horsburgh as coach of the senior crews. He was one of the most successful coaches that Victoria has known. Among his major successes were:

He also coached the Victorian crew for the Interstate race in the following years, but without scoring a win. 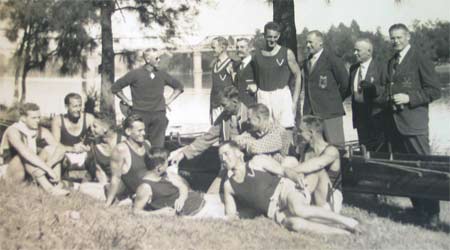 In 1904 the first "Henley-on-Yarra" (the greatest rowing regatta in Australia) was organised by the Melbourne Amateur Regatta Association, which body was formed through the initiative of A. R. Blackwood and George Fairbairn (both members of Melbourne Rowing Club) and Captain W. C. Rivett. Sir George Fairbairn was the first President of this body and continued in that office for many years.

For many years about (20) the "Melbourne" and the "Service" Clubs held their annual and other general meetings at that famous old rowing hostelry known all over the English speaking world as "Young and Jacksons." For many years the "Y. and J. Eights" for combination scratch crews, conducted by Melbourne Rowing Club, have been a feature of the rowing calendar and the Cups are still eagerly competed for.

Limitation of space precludes anything like an adequate presentation of the history of the three sporting bodies which in the course of the years have been welded into one. As has been said, the Melbourne Rowing Club (short title) has had its ups and downs.

The barometer seemed set for Fairweather when in the early hours of 24 October, 1948, a major calamity well-nigh overwhelmed the Club when its boat-house was gutted by fire, with the destruction of the whole fleet, with all its hard-won Pennants and pictorial records of winning crews. As when other clubs had suffered similar misfortune, the rest of the rowing world rallied to the rescue and inundated the committee with offers of assistance. Special recognition must be made of he generous hospitality of the Melbourne University Boat Club which offered us accommodation for three months, but as it turned out housed us for 14 months at, what must have been to them, great inconvenience: To that club and to all the others who lent boats and gear. Melbourne wishes to tender sincere thanks.

And now, largely because of the sympathetic co-operation of the Lord Mayor and Councillors of the City of Melbourne, the Club is in occupation of its own boathouse again.

As an example of the spirit of members, it is well to cite the winning of the Senior Premiership in the season immediately following the fire. Truly we have "risen Phoenix-like from the ashes."

And in conclusion, let us hope that the Club will live up to, if it cannot use as its own, the motto of the City of Melbourne "Viro acquirit eundo."