In "The Argus" of March 13, 1862, appeared a report that "an adjourned meeting of gentlemen forming the new Melbourne Rowing Club was held yesterday at Marshall's `Crickets' Arms Hotel, Swanston Street. Mr. J. C. Tyler in the chair. A list of 41 enrolled members was laid upon the table. The rules of the London Rowing Club -were adopted" subject to alteration to meet the requirements of the new club. Mr. J. H. Were was appointed Hon. Treasurer, and Mr. W. H. Handfield, Hon. Secretary. The subscription was fixed at two guineas per annum, with entrance fee of one guinea.

We read in "The Argus" of 19-6-62 that the "club has already made a start, and the foundation of a fleet laid" - a "four" had been purchased from Fuller to be used as a "hack" boat for Novice oarsmen, and a new "four" was also on order from the same firm.

The first accommodation was arranged, the Club taking over one-half of the new boat-house built by Edwards on the south side of the Yarra by Princes Bridge - two rooms being fitted up with lockers and showers. 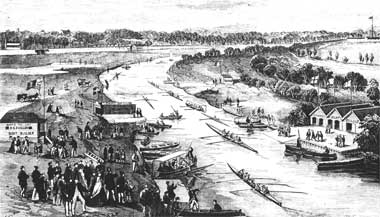 Easter Monday 1867 - Edwards Boat Shed is on the right

The official opening day was Tuesday, July 1, 1862 (which was a public holiday), when, with the help of borrowed boats, many members were afloat, and the other clubs helped to make the day an auspicious occasion.

On 22nd July 1862 a general meeting adopted the colours of the Twickenham Rowing Club crimson and blue, the flag to be a St. George's Cross (crimson cross on dark blue ground).

The Club was not long in making its presence felt, for on November 11 of the opening year at the Melbourne Regatta on the Saltwater River course it won "Four Silver Cups for four-oared boats (excluding out-riggers) for amateurs," and the same crew, (Chomley, Bennett, Hickling and Wardill str.) was second to a combination crew in the four-oared gig race after getting a bad start.

At the Melbourne Regatta (2nd April 1866 on the Saltwater course) the club won the Grand Challenge Cup (fours) and the Maiden Sculls, and was second in the Challenge Sculls.

Again on 11th April 1868 Melbourne, after winning its heat from University by four lengths, went on to win the final of the Senior Four Gig race from Richmond. On the same day the same crew won the Grand Challenge Cup (fours).

And so the Club went on winning many races, and taking a very prominent part in the administration of the sport of rowing.

It might be appropriate here to set out the order of foundation of some of the oldest Victorian rowing clubs still in active operation.

In his "Victorian Oarsman and Rowing Register" (p. 28), published in 1919, Mr. John Lang says "The Melbourne Rowing Club (founded 1862), for a score or more of years has not competed at regattas, though it is still represented on all aquatic sport committees. The record of this Club, with over 100 wins and holders of several fine Challenge Cups, is one that should be specially mentioned."

The first eight oared boat in Victoria (built by James Edwards) was launched on 23rd October 1869. The crew selected to take her out included three members of Melbourne Rowing Club - H. A. Williams (Str.), W. N. Orr (5) and J. C. Tyler (bow). They rowed up to Cremorne (at South Yarra railway bridge) and back. As the "Australasian" put it "when safely housed on its return the company present partook of copious libations in honour of the venture."

The report presented at the 9th Annual Meeting held at the Port Philip Club Hotel on 31-7-71 stated that the "Club" was represented in every race at the recent Melbourne Regatta, and also in several races at the Ballarat regatta of the same season in which it had a series of brilliant victories" (Argus, 1st August 1871).

The following year (1872) at the Melbourne Regatta the Club contested 10 out of 11 races on the programme, and won five races. In 1873 at the same Regatta (which was the then equivalent of the present Henley-on-Yarra) the Club won four races out of eight contested, viz. The Gardner Cup (3rd time and retained by the Club), the Challenge Sculls, Challenge Oars (pairs) and junior Pairs.

Running through the rowing records one notes the following successes by Melbourne Rowing Club at the Melbourne Regatta, without considering other and country engagements:

The Krug Champagne Challenge Cup for Senior Eights (non-manual labourers) was won in 1882 (twice) and 1883, and became the property of the Club. And so on for many years. 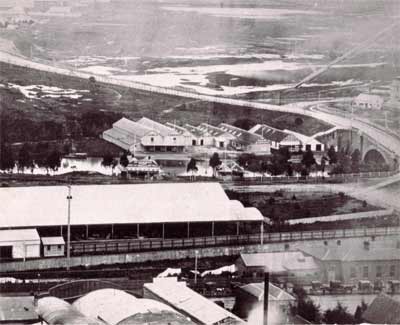 The rowing sheds pre 1884 with the old bridge

The year 1878 was made notable in rowing history by the first Intercolonial Eight-oared Championship rowed on a course of about four miles on the Lower Yarra. It was won by Victoria, the Melbourne Club filling seven seats - George Fairbairn (str.), T. H. Young (7), J. M. Simson (6), W. H. Tuckett (5), J. L. Irvine (4), J. Booth (2) and Ward (bow), the only outsider being W. C. Bray of Warehousemen's Club in 3 seat.

Writing in 1919, Mr. Thomas Colles of the Melbourne University Boat Club and a member of the 1870 and 1871 winning crews in the Inter-University Race mentions 20 outstanding oarsmen of the 60's and 70's, eight of them being members of Melbourne Rowing Club, viz - H. A. Williams (a successful stroke), the two Saddler brothers (H. and V. J.), W. M. Orr (the outstanding sculler of his day, and No. 3 in the fours), J. H. Hood, James Cazaly (considered by many as the best oarsman and sculler on the river), J. Edington and T. H. Young.

The Club went along successfully for many years, but in the middle of the 1890-1900 decade it gradually declined. The 1893 report cited only two wins for the season. In 1895 and 1898 reference was made to the decline in the Club's activities. From 1898 rowing was continued by the few members remaining as a non-competitive exercise.