An occasion worthy of note is the winning of every event on the programme. This happened at the Australia Day Regatta held 28th January 1959 on a course across Matilda Bay Crawley and despite damage done to the almost new practice four "R.G. Semple" as a result of a collision with the umpires launch just prior to the start of the Maiden Four event.

The crews were prepared by Bob Brealey and Ralph Jeffreys and were as follows:

Upon receipt of the advice on 11th November 1960 from the Fremantle Harbour Trust giving the first real intention of up river harbour extension, a sub-committee comprising R.S. Jeffreys (President), R.J. Brealey (Captain) and J.E. Jeffreys (Convenor) was appointed in order to eventually re-site the Club. This sub-committee performed a tremendous amount of work and were the deputations to many Government and Local Government Bodies. Three suggested sites were examined, first on an area some one hundred and fifty yards down river from Pier Street Jetty, second on an area below the cliff between Bicton and Preston Point, third on Preston Point. Finally as a result of negotiations a letter dated 7th July 1961 was received from the Minister for Works advising the President of the Club that the Government would reclaim an area of about three acres on Preston Point for the re-siting of Fremantle Rowing Club and dredging began shortly afterwards.

During the time of the dredging, the Swan Yacht Club sought to have the reclaimed area extended westwards in order to allow the transfer of their Club from its existing site opposite Point Brown also Mr. Gerry Chrystal sought to have the area extended eastwards in order to allow for the construction of a Marina. These proposals were agreed to by authorities concerned and eventually a survey was made of the whole area and the Fremantle Rowing Club was officially advised by the Under Secretary of Lands by letter dated 16th January 1963 as follows:

Further to previous correspondence I wish to advise that the approval of his Excellency the Governor in Executive Council has now been obtained to the following:

(b) Swan Location 7523 being set apart as Reserve No. 26590 for the "Use and Requirements of the Fremantle Rowing Club and Free Public Pedestrian Access" and that this reserve be leased to the Fremantle Rowing Club (Incorporated) to be held in trust fur the "Use and Requirements of the Rowing Club and Free Public Pedestrian Access" for a term of 99 years at a peppercorn rental, subject to the following conditions:
(i) The lease shall be determined if at any time the Club relinquishes possession of Reserve No. 26589 (Swan Location 7522) or fails to use either Reserve for their respective purposes.
(ii) Pedestrian public shall have the right of free access to and over the whole of location 7523 at all times.
(iii) The Club shall keep the foreshore clean and clear of algae, rubbish and debris."

Notices to this effect were published in the Government Gazette of the 11th January, 1963.

The establishment of the Club on the area allotted was, during this period being examined and with the assistance of Syd Ryan, a former member, plans were drawn up for the construction the outside shell, with doors, windows and roof for a Clubhouse 68 feet span x 73 feet x 12 feet of steel brick and asbestos. Building began on 16th July, 1962 after permits had been obtained, supervised by Syd Ryan as a principal of Tubular Steel Structures and was completed late in September of that year. This Preston Point Area had not yet been serviced and water had to be carried to the Clubhouse in an old milk drum.

The shed was wired for electricity and for a short time an auxiliary lighting plant was borrowed from the Fremantle Harbour Trust. However the operation of the Plant became a problem and the noise it created in the empty shell of the shed forced it to be dispensed with and lighting was provided by "Hurricane Lamps" fuelled by kerosene. Boats had been recovered from their storage in the Wool Sheds in Beach Street and either laid on the sand floor of shed or on trestles. The sand extended from the shed floor to the rivers edge and as at time there was no other development on the area the sand blew around at will outside the building, banking up almost to the lower level of the windows giving it a desert like appearance. 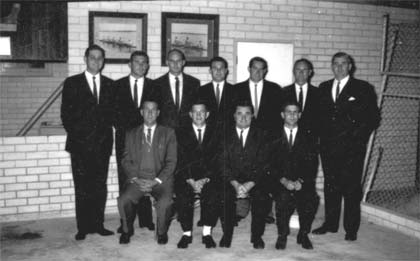 The committee in the new clubrooms circa 1962

Plans were set in motion by the Committee for the development of the open. Working Bees were formed and Peter Cleaver undertook to supervise construction of a fence, Don Lewis tree planting, Ron Hardy Plumbing, Peter Hall boat racks, Brian Coughlan and Vic Wallington internal construction and walls.

The establishment efforts were saddened by the fact that the President of the Club R.S. (Pop) Jeffreys who by his long association with the Club (55 years) was respectfully referred to as "The Father of the Fremantle Rowing Club", and who had energetically steered the Club through its negotiations for the new site, died peacefully after watching the Fremantle Champion Eight win convincingly on 25th August 1962.

With the practice boats stored away during 1962 and with no Clubhouse, arrangements were thankfully made with W.A. University Boat Club to allow F.R.C. Senior Oarsmen to train from their Clubhouse. In all only nine oarsmen (all senior) competed during the 1962 Season with the outstanding result of winning all three Open State Championships. The winning crews were: 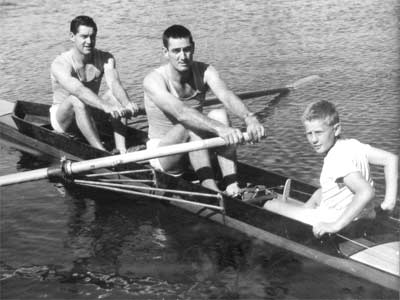 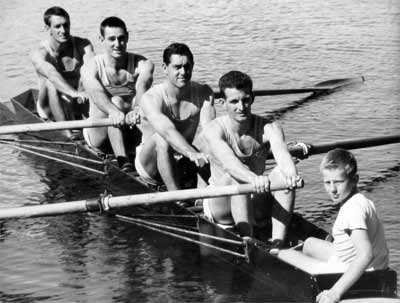